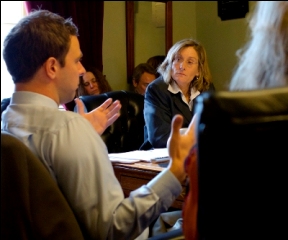 Rosemary Gretkowski, a lawyer with the Department of Public Safety, tells lawmakers Thursday that her department supports the administration’s push towards a federal standard on public records and criminal investigations. Photo by Nat Rudarakanchana

The Senate Judiciary Committee signaled its willingness to open police criminal case files to public scrutiny for the first time.

The legislation requires that criminal investigative records, now off-limits to the public, be subject to the federal standard of disclosure under the Freedom of Information Act.

Under the legislation, police criminal files must be released unless one of seven exemptions applies. The exemptions are designed to protect personal privacy, the right to a fair trial, and confidential informants, among other things.

Karen Horn, a lobbyist for the Vermont League of Cities and Towns, proposed a contentious change to the federal standard last week.

The League’s provision requested that records that could “implicate an innocent person who is not the subject of investigation” remain confidential. Horn told VTDigger she wanted to protect the privacy of people caught up in broad police investigations, who later turn out to be irrelevant, and shield them from public embarrassment, via the press or otherwise.

But a memo written by Allen Gilbert, of the American Civil Liberties Union, argued that this language, which some lawmakers described as a helpful guide for state officials receiving records requests, was both redundant, vague and harmful.

A compromise hammered out by committee members on Thursday morning requires that records released to the public not reveal the names of people not subject to investigation.

The Judiciary Committee’s intent was for records to be released – with redactions of names and personal information – rather than entire records being withheld if they included information about people not under investigation.

Aside from the amendment withholding information about people not under investigation, the bill follows the federal FOIA model closely. The Shumlin administration has urged lawmakers to stick as closely to the federal standard as possible, arguing that there is a body of federal case law to support the model.

In the past, Vermont Attorney General Bill Sorrell has said that the federal standard is inferior to the state’s current law for protecting the privacy of ordinary Vermonters.

White, who has strong reservations about the League’s proposal, wants her Government Operations Committee to examine it.

As for the bill’s fate on the floor, Judiciary Committee Chair Dick Sears, D-Bennington, said that if the Government Operations Committee backs the bill, it’ll already enjoy the support of a third of the state Senate. He doesn’t anticipate much opposition or other major amendments.

“We’ve come to the point, in my view, where we are adopting the federal FOIA standard for open law enforcement records,” Sears said. “That’s a huge step forward for Vermont, I think.”

Although senators described the topic of transparency as “fashionable” and “the big buzz word of the year,” Burlington Democrat Tim Ashe also cautioned: “What people have to appreciate is that we are taking a chance on a new system, of handling these records. And there are risks to people’s personal lives and privacy.”

[DISCLOSURE: VTDigger’s editor Anne Galloway sent an email to the Senate Judiciary Committee backing the ACLU’s position on this amendment. VTDigger and Bill Schubart, the chair of the Vermont Journalism Trust, have lobbied for opening police records to public purview.]

Thanks for reporting an error with the story, "More transparency in police records gets Senate panel’s backing"