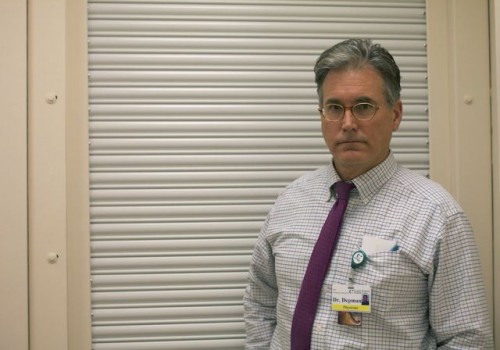 When psychiatric patients are stuck in emergency rooms, Depman said, “they don’t see the sky. They can’t get out to walk and get some air. They don’t get treatment, and in most ERs across the state, they don’t even get directive psychiatric management.”

At Central Vermont, Dr. Depman showcased one of the emergency department’s three designated rooms for psychiatric care. Two of them are near the center of the facility and one is in a locked-off ward.

The room is sparsely decorated with a gurney and a chair. A steel overhead door separates the room from medical equipment and a sink to prevent suicide attempts. Fluorescent lights splash off the walls, which are seamlessly painted white, except a small patch that is flaking up from the corner. The hospital recently repainted the room after a former patient left it in shambles.

When psychiatric patients come into the ER, they sit inside the small, walled-off room as a nurse watches them from a video monitor.

“This is the humanitarian tragedy of this series of events that has happened in this state for which no one is at fault,” Depman said.

“When they are most acute these patients are not getting therapy, and we just wear them down over a series of days,” Depman said. “We literally wear these people down until whatever psychiatric or emotional state they’re in just gets worn down by being in the same room for days. Sometimes they get better; sometimes they get worse; and none of this is good.”

Walking out of the ER, Depman, the director of Central Vermont’s emergency department, motioned to the other side of a divider, where a group of physicians and nurses were helping a man who just had a heart attack. They were preparing to send him to Fletcher Allen Health Care in Burlington for more specialized care.

“He will live,” Depman said confidently. “If someone comes into our ER with an acute heart problem, I get them to the right place … There isn’t ever a patient who would wait more than a couple of hours for that transfer of care.”

When a patient undergoes a severe trauma or orthopedic surgery, he said, “There’s no question that patient, as much as they’re using up our attention and resources for a couple of hours, would then go to the next place where their specialized care would be met.”

That’s not the case when it comes to psychiatric care, he says. Right now, as a result of changes in the state’s mental health system, patients are waiting for days, and even weeks, for the specialized treatment they need.

“This is the humanitarian tragedy of this series of events that has happened in this state for which no one is at fault,” Depman said. “This is just a terrible confluence of events. I don’t think anybody has done anything willfully wrong or in any gross incompetence. The closing of the state hospital was just a bad event.”

The amount of time psychiatric patients are waiting in Vermont ERs for openings at inpatient facilities has increased dramatically since the Waterbury state hospital closed in August 2011 when Tropical Storm Irene pummeled the facility. The state has not yet brought enough new beds for patients on line, and the situation is putting a strain on emergency rooms, which aren’t adequately equipped for the large influx of severely mentally ill patients.

According to numbers provided by the state, the average time these patients spent in an ER waiting for admission to an inpatient facility quadrupled from 10.7 hours in April to 42.4 hours in October.

Vermont inpatient mental health beds in use to date

In November, those numbers improved. Average wait times dipped to 24.3 hours, and the average wait time when a bed was unavailable decreased from 52.9 hours in October to 31.8 hours in November.

But the longest period a patient had to wait for a placement shot up from 57 hours in April to 245 hours in November. That’s more than 10 days.

Vermont won’t see a substantial improvement in mental health care for patients suffering from acute mental illness until new facilities open in the next year or two, according to acting Commissioner of Mental Health Mary Moulton.

Even then, many physicians question whether the state’s mental health overhaul — mandated by Act 79 — will create a system that can keep up with demand.

Leading medical professionals say the state is not creating enough beds for the state’s psychiatric patients.

The state plans to replace the 54-bed Vermont State Hospital with 45 acute care beds in three locations: a new 25-bed state hospital in Berlin in 2014 and 20 beds between the Rutland Regional Medical Center and the Brattleboro Retreat in early 2013.

“We’re not replacing what we already had, so I’m concerned,” he said. “We’re also distributing care across the state, and that gets complicated … It creates a risky situation.”

He is especially worried that the plan to decentralize care will diffuse expertise and diminish the state’s ability to respond to patients’ needs. Acute psychiatric care is currently available at Fletcher Allen, Central Vermont, Rutland, Brattleboro and Berlin.

“It will be very challenging because we don’t have enough psychiatrists to cover 24 hours a day seven days a week in five different places,” he said.

Pieratinni’s concerns are similar to those expressed in 2011 by the Department of Mental Health’s outgoing medical director, Dr. Jay Batra, when Gov. Peter Shumlin proposed a decentralized system.

Paul Elmore, nurse manager for Porter Medical Center’s emergency department in Middlebury, is also worried about the state’s plan. He speculates that over the next decade Vermont will see an increase in psychiatric patients due to economic and environmental pressures. For smaller hospitals like Porter that don’t have a psychiatric unit this situation puts an enormous level of stress on their staff and patients. 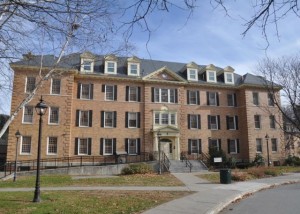 State patients are treated on the fourth floor of the Tyler Building on the Brattleboro Retreat campus. Photo by Randy Holhut/The Commons

“My fear is we are behind the curve already in bed placements and that what the state has organized is not enough to meet the need as we go forward,” he said. “They are addressing it; I just fear we’re not putting enough beds aside.”

Rep. Anne Donahue, who co-chairs the Mental Health Oversight Committee, said the decentralized system was adopted to keep patients closer to their homes, to capitalize on federal Medicaid dollars and for political reasons.

From the beginning, she said, she opposed the plan because of its financial hurdles. She doesn’t think the state has the funds to provide around-the-clock care at all five acute care facilities, and she is particularly concerned about the capacity of the Brattleboro and Rutland hospitals to offer that level of treatment.

“The handwriting has been on the wall since the plan was approved that this was not going to be viable,” she said.

A strain on patients and hospitals

When a psychiatric patient who needs inpatient care does not get placed in one of the state’s roughly 170 beds that are currently in use, medical professionals agree that the patient suffers.

Central Vermont is one of three Vermont hospitals with emergency departments that have psychiatric care units, which does not necessarily mean the hospital has room to treat those patients at the facility. The other hospitals that have inpatient facilities are Fletcher Allen and Rutland. Brattleboro Memorial Hospital works closely with the Brattleboro Retreat and Springfield Hospital collaborates with the nearby 10-bed Windham Center.

Paul Elmore said that dealing with the state’s mental health demand is the leading concern for the Vermont Emergency Nurses Association, comprised of nurse managers from across the state.

“Just with one or two of these psychiatric patients you can really burn out your staff fast because they have a lot of needs,” Elmore said.

One major issue Elmore spotlighted is that these small hospitals don’t have the psychiatric or security resources to support severe mental health patients. In the past month, he said, the longest wait time a psychiatric patient endured in Porter’s ER was roughly four days. But that amount of time presents a major obstacle for the eight-bed department.

“Four days for us ties up 12 percent of our ER for that amount of time,” he said. “So 12 percent of our ER is gone when we’re already overcrowded. It really is a crisis. The small hospitals are just struggling with this issue because we don’t have the bed space, the staff or the security to deal with it.”

Depman said that although his department has help from the psychiatric unit, the situation is draining his staff, too.

“Just with one or two of these psychiatric patients you can really burn out your staff fast because they have a lot of needs,” he said. “Their behavior can be unpredictable and even more so because of this lockdown quality of their life. And that, by necessity, is constantly pulling staff away from their regular duties to help attend to the unpredictable events of this patient. So, it really does create unnerving pressure on the staff.”

One of Elmore’s gravest concerns is that if the state and emergency departments don’t tackle this problem soon, someone could get injured or worse.

“Somebody is going to get hurt here because there’s not a consistent approach to this,” he said. “When people ramp up, you need to have the proper response and a lot of these ERs are woefully underequipped to deal with these patients from a security standpoint. The patient is at risk, the staff is at risk and the general population of patients in the ER is at risk.”

“We can’t continue to look at this as a blip of crisis; we have to say this is an ongoing circumstance,” she said. “We will have more not fewer people in crisis. … If you can create a system for 72 minutes from a heart attack to an open artery then you can create a solution for mental health needs in emergency rooms.”

Dr. Batra told VTDigger this problem wasn’t simply created by the closing of the state hospital — it’s “systemic.” The professor of medicine at the University of Vermont said physicians across the country who aren’t psychiatrists don’t receive enough training to properly treat psychiatric patients.

Thanks for reporting an error with the story, "Medical professionals say ER treatment for psychiatric patients is wo..."