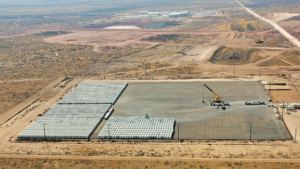 Vermont regulators made a special agreement with Texas more than a decade ago to send all of the state’s low-level radioactive waste from the plant in Vernon. The facility in West Texas will someday entomb the nuclear plant’s dismantled body.

Two years ago questions were raised about the long-term capacity of the facility in West Texas after officials agreed to allow other states to dump radioactive waste at the site.

Vermont officials told the Texas Low-Level Radioactive Waste Compact Commission this week that they expect to have ongoing access to the facility. The commission, which has two representatives from Vermont, met in the Green Mountain State for the first time on Wednesday.

The commission was formed through a compact agreement signed between Texas, Vermont and Maine in 1993 to dispose of the Lone Star State’s nuclear waste and allow the two smaller states to tag along. Congress approved the compact in 1998, but Maine later pulled out as its only nuclear plant Maine Yankee was already decommissioned.

The compact commission was created to oversee and manage the disposal of low-level radioactive waste generated in Vermont and Texas, and it chose the company Waste Control Specialists, LLC (WCS) and its site in Andrews County for the waste storage.

The state of Vermont has paid $25 million to Texas and $2.5 million to Andrews County to ensure that 20 percent of the landfill’s capacity would be left for Vermont-generated waste. WCS began preparing the site in 2008; the commission met for the first time in Feb. 2009; and the landfill received its first concrete barrel of radioactive material in April.

The first shipment of radioactive material from Vermont arrived in Texas earlier this month, but it wasn’t from Yankee. The first container came from Fletcher Allen Health Care in Burlington.

Fletcher Allen spokesman Mike Noble said that the state’s largest medical facility shipped 29 units of cesium-137 in a 55-gallon concrete drum. The radioactive material, which was previously used to treat cancer patients before it was rendered obsolete, had been stored at the facility for roughly 20 years.

Vermont Yankee also sent its first shipment of radioactive resin earlier this month. The nuclear facility’s waste will account for more than 90 percent of all waste coming from Vermont, said Vermont Yankee representatives on Wednesday.

According to those representatives, the nuclear plant shipped a second barrel of waste on Wednesday and a third is scheduled to go out early next week.

In January 2011, the commission voted to allow 36 other states to store radioactive waste at the Andrews landfill. At the same time, the commission also passed an amendment that guaranteed Vermont a 20 percent share of that space.

Richard Saudek, one of Vermont’s two commissioners, said in an interview that the commission spends most of its time ruling on whether the site should allow shipments, called imports. Commissioners are fixated on protecting space for Texas and Vermont generators to store this waste.

“Our main concern is that there be sufficient capacity to handle the in-compact waste,” he said. “We see ourselves as advocates for the compact generators.”

Rod Baltzer, president of WCS, told the commission not to worry.

“There should not be any anxiety from Texas or Vermont,” said Baltzer. “Whoever needs to ship us radioactive waste from Texas and Vermont will not be turned away.”

Vermont officials are worried, however, because they believe the state’s radioactive waste will grow as Vermont Yankee continues to operate and is eventually decommissioned.

“You’re not going to see a great deal of precision at this point,” said Saudek about projecting the state’s future need to store such waste. “When they dismantle Vermont Yankee and start sending the parts, they don’t know when that’s going to happen, and they don’t know how much waste they’ll generate before that point.” 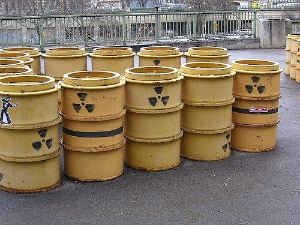 Deputy Commissioner of the Department of Public Service Sarah Hofmann said in a separate interview that Vermont regulators would keep a very close eye on the issue.

“The Texans have been very good about making sure that we have space for our waste, but I want to always be vigilant about keeping our space,” she said. “The people on the commission are very aware of what our concern was.”

‘We call ourselves the Texas solution’

That’s what Baltzer told the commission on Wednesday.  From nuclear to medical to high-level weapons waste, WCS stores some of the world’s most harmful substances.

“We’re the place that you can actually get rid of that material,” he said.

The 15,000-acre site straddles the Texas and New Mexico border and is spread out across arid desert. Of that total landmass, Baltzer said a mere 2 percent is used as a radioactive landfill.

“Only about 300 acres are really where we do most of those activities,” said Baltzer. “The rest of that is what we like to call buffer zone.”

Before the compact’s waste site was dug, or the new federal site next to it, WCS took more than 640 core samples to determine the ground’s geological characteristics. According to Baltzer, no aquifers were identified on the property. Surveyors did, however, find groundwater dating back 16,000 years. In this arid environment, said Baltzer, horizontal groundwater travel is four feet per 1,000 years.

Furthermore, added Baltzer, the water used at the facility is pumped to evaporation tanks, and the hazardous residue that remains is barreled up and dumped in the landfill.

Hazardous materials are stored in large concrete casks within a massive underground chamber, which is enclosed by consecutive layers of clay, plastic and concrete.

By the end of August, said Baltzer, the facility had disposed of 4,365 cubic feet of waste and 20,634 curies, which is a measurement for radioactivity.

While Baltzer said the facility might ask regulators to allow it to expand the size of its landfill in the future, the most limiting factor for the facility at this point is the threshold for radioactivity currently imposed by regulators.

“We haven’t asked for anything yet, but it should come as no surprise that I’d like more curies than I was originally allocated,” he told commissioners.

Thanks for reporting an error with the story, "Vermont sends first shipments of radioactive waste to Texas"