Six protesters demonstrating against Green Mountain Power’s wind energy project on Lowell Mountain were arrested this afternoon for unlawful trespass, following a protest of about 50 people.

The protesters believe the 21 wind turbines will cause needless environmental damage and won’t contribute significantly to combating climate change. They also argue that the regulatory process which cleared the project had flaws.

William Roddy, an Irasburg mason, said that he allowed himself to be arrested because he “wanted to make a statement.”

“It’s frustrating to me,” said Roddy, who added that he feels a “close connection” to Lowell Mountain, partly because he sees it from his home. “There’s no environmental protection in Vermont anymore.” 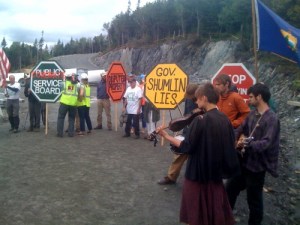 According to protester Will Young, about 25 activists gathered at the protest site from about 6 a.m. Monday until shortly after the 1 p.m. arrests. Young described the atmosphere as friendly and energetic. Activists played music, danced and engaged site construction workers in casual banter.

“I feel like they [GMP] only went through the public process to a point, and the process is flawed,” said Young, a self-employed logger and farmer from Westfield. “Community members don’t have the resources to have a strong voice. It’s complex, expensive, and lawyers don’t want to do it.”

Young explained that construction cranes were not physically blocked by most protesters, but that some construction may have been delayed due to the protest. He added that the protest took place on disputed land, a current subject of litigation between GMP and Don and Shirley Nelson.

“It is regrettable that a small group has once again resorted to illegal actions,” said GMP spokesman Dorothy Schnure, in a statement earlier this morning. She added that the Kingdom Community Wind project enjoyed broad support, including from Lowell residents, and that protesters on the construction site created safety hazards.

Roddy said a mock funeral procession would likely take place on the mountain tomorrow, with participants dressed in black and bearing flowers. Meanwhile, Vermont State Police and the Lamoille County sheriff met with GMP officials to discuss how to manage future protests.

The six protestors arrested today were:

Protesters posted photos and videos from the day to a live website, here.

Correction: The spelling of Keith Ballek’s name was corrected.

Thanks for reporting an error with the story, "Six protesters against Green Mountain Power wind project arrested on ..."