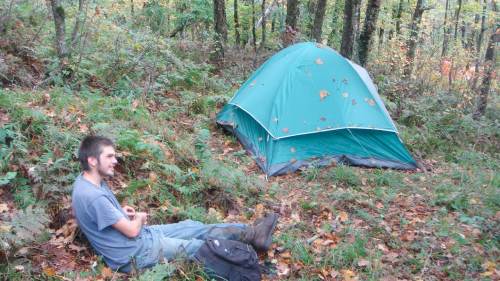 A Sterling College student who chose to identify himself as Bumblebee takes a break after climbing to the campsite. Photo by Chris Braithwaite.

Editor’s note: This story by Chris Braithwaite first appeared in the Barton Chronicle.

LOWELL — The campsite, with its six small tents and a sheltered kitchen area, is a long, difficult hike from the nearest road.

But it’s close to a heavy orange tape that threads through the woods, from tree to tree, marking the edge of the work area of Green Mountain Power’s industrial wind power site.

Close enough to hear the heavy equipment as it works its way up Lowell Mountain from the west. Plenty close to hear the echoing booms of the blasting.

The campsite is there to stop the blasting. Established by students at Sterling College in nearby Craftsbury Common, and supported by a growing list of volunteers, it sits near the western boundary of Don and Shirley Nelson’s farm.

The campers have parked their tents close to the project in the hope that contractors won’t be able to safely detonate the high explosives needed to build a wide crane path along the ridgeline and the turbine sites it would link together.

Early this week the contractors were still working their way up the mountain toward the ridgeline.

As the workers approach, the Nelsons say, they will need to be mindful of the safety of their “guests” on the mountain.

“Our guests will be camping, recreating and hunting in that area for the foreseeable future,” they wrote in a letter to Green Mountain Power President Mary Powell. “We trust you will be respectful of their presence and particularly their safety.

“We would appreciate receiving written confirmation that no fly-rock from you blasting will trespass or intrude on our property and that nobody will be endangered,” the letter concludes.

The Nelsons have fought the wind project for years, ever since turbines were first proposed on Lowell Mountain by a less determined developer who withdrew in the face of local opposition.

So far, their efforts to preserve the mountain have failed. But this time they hope they have found a way to use their close proximity to the project to bring it to a grinding halt.

Nelson says that high explosives require a 750-foot safety zone, free of people, before they can be set off. The campsite is well within that limit, he says.

Green Mountain Power spokesman Dorothy Schnure said in an interview that Nelson’s estimate “could be” right.

If the campsite is in the way of the blasting, the question becomes how the contractor would force people to leave private property so the work could proceed.

Last week Attorney General William Sorrell told the Associated Press that the state’s trespassing law wouldn’t apply in this case. If people are camping or hunting with the landowner’s permission, he said, “there’s no criminal violation that readily comes to mind.”

“We’re not up there yet,” Ms. Schnure said when asked what the utility plans to do. “I think there’s time to address that.”

If a boundary dispute is settled in the Nelsons’ favor, Don Nelson said, his line would move virtually up to the construction side itself. After hiking through some particularly rough terrain, he found a pin set into the base of a small tree by surveyor Paul Hannan.

Hannan, who was hired by the Nelsons to mark the property line, set the pin at what could be the northwestern corner of the Nelson farm. It sits 156 feet west of the current line. The tape marking the Kingdom Community Wind project’s work zone is wound around the tree where Hannan set his stake.

From where the six tents have been set up, Nelson said, his property line should move 181 feet to the west.

Nelson believes that the heavy orange tape, and another that runs parallel to it some distance to the west, mark the limits of the road needed to carry the massive crane that would erect the towers. If he’s right, the boundary marked by Hannan would force Green Mountain Power to re-engineer its project, moving it down the mountain to the west.

The property dispute is with Trip Wileman, who promoted the wind project before Green Mountain Power came into the picture, and has leased the utility land for most of its 21 turbine sites.

In an interview in September 2010, Wileman said he considers the boundary a settled matter, the subject of a signed agreement with the Nelsons.

Thanks for reporting an error with the story, "Protesters camp on Lowell Mountain to halt blasting for turbines"