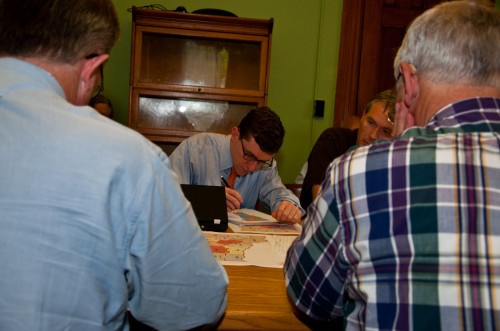 The Apportionment Board at work. VTD/Josh Larkin

The following is a public service.

Scratch that. Life is easy these days, compared, at least, with those days, the ones where you had to feed twigs into the cookstove, discomfit Bossy to get a glass of milk and walk outside to perform some of nature’s necessaries.

But life isn’t tranquil these days. There’s lots to do, and for responsible citizens, that includes keeping oneself informed, which in turn means reading/watching/listening to the news, some of which can be confusing.

Here, then, is some news you don’t have to read/watch/listen to or click over: Anything having to do with the Legislative Apportionment Board.

Ignore it. No need for your eyes to glaze over, as they probably would. Just direct those eyes (or ears) elsewhere, to something that matters to the human race, like when is Derek Jeter getting his 3000th hit.

A brief (if perhaps not brief enough) account of what and why the Board. Every 10 years, after the national Census, the boundaries of all legislative districts have to be changed to reflect population changes, and to keep the district lines in compliance with the “one person-one vote” standard established by the U.S. Supreme Court in 1964.

Like many other states, Vermont uses an Apportionment Board to pore over the U.S. Census statistics and recommend a new apportionment plan. This year the Apportionment Board decided to make some political mischief. Do not interpret that description as an attack, either. Making political mischief can be fun, even useful. Besides, it’s about all that Republicans and Progressives are able to do these days. The Democrats hold 94 of 150 House seats and 22 of 30 senators. So there’s no mystery about why the two Progressive Party members of the Board and two of the three Republicans took that course.

Were this plan to be adopted, it would force many incumbents – meaning, of course, mostly Democratic incumbents – to run against one another.

Hence it will not be adopted.

The Board has no power. In the words of its “secretariat,” the office of Secretary of State, “the Apportionment Board drafts the initial apportionment plan. The General Assembly, drawing from this plan, enacts the apportionment system for the ensuing decade.”

In other words, the Board recommends to the Legislature. The Legislature has the power. It reapportions itself. The Board has recommended that it do so by forcing more than half of the incumbents in both houses either to run against another incumbent or (depending on exactly where each one lives) to run in a new, smaller, district.

To appreciate the absurdity of this recommendation, it is necessary only to ask when any legislative body – absent some compulsion – ever reapportioned itself in a manner so discomfiting to so many incumbents.

Let’s see, there was…uh, no, actually, not that time. Well how about back in….no, not then, either. 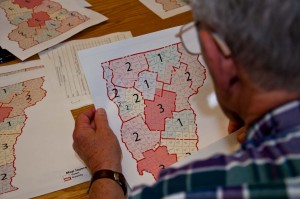 Gerry Gossens looks over the latest apportionment maps during board meetings earlier this week. VTD/Josh Larkin

Leaving the true answer to the question to be: never. Not, at least, in the history of the human race, which is probably as far as we need go in this exercise. It will not happen in Vermont this year, either.

But what about the possibility that “some compulsion” will convince lawmakers to take the Board’s advice?

Not likely. In the past, legislatures reapportioned themselves in ways they did not like only under court order, usually after courts found racial discrimination in the status quo. According to Tim Storey of the National Conference of State Legislatures multi-member districts “used to be far more common, particularly in the Southern states” where they were a handy tool for minimizing the number of African-Americans elected to a legislature. Artfully place a collection of black neighborhoods in a larger, white-majority area, and Poof! Two white lawmakers and no blacks.

Needless to say, that’s not a factor in Vermont, where there are not enough non-whites against whom to discriminate if anybody wanted to, which nobody does.

In theory, Democratic Legislators might feel themselves under some political compulsion – or at least pressure – to follow the Board’s advice. If, for instance, the general public were to rise up and demand a single-member apportionment system, lawmakers could find themselves in a quandary, torn between protecting themselves and pleasing their constituents.

Such an uprising might be what the Board’s Republicans and Progressives hoped to inspire. If so, there is no sign they have succeeded. The general public, it appears, is entirely indifferent to how the Legislature apportions itself, leaving the lawmakers free to do as they please. They will please to do the minimum amount of tinkering to comply with the one person-one vote principle.

None of this means there is not a good case to be made for single-member districts. In fact, they are the norm. Members of Congress and 40 of the 50 State Legislatures are chosen that way. And in most of the other nine, Tim Storey reported, the multi-member districts are “nested,” with two house members chosen from each senate district. With single-member districts, it’s easier for citizens to know who represents them in each house, and it’s cheaper and more convenient for the candidates. Each district would be smaller, more compact.

But in Vermont, those districts might be too small, with about 4,200 people in each House district, some 21,000 per senator. Especially in the House, it would mean dividing some small towns into two separate districts. Vermont law (Section 1906B of Chapter 34A) stipulates that in drawing district lines, officials may take into account “patterns of geography, social interaction, trade, political ties and common interests.” As long as the one person-one vote standard is met, the Federal Courts have no problem with that.

The one place where the Legislature might feel some pressure to make a fundamental change is in Chittenden County, which elects all of its six senators at large. No other legislative district in the country elects that many members at large.

On the other hand, it’s reasonable to assume that the six Chittenden senators – five Democrats and Republican Dianne Snelling – are satisfied with the status quo, and will prevail on their colleagues to maintain it.

An analysis of the Board’s proposal posted on the loyally Democratic “Green Mountain Daily” web site suggested that were it adopted, the Republicans might pick up one or two seats. That analysis, however, was completed before the Board realized that it had miscounted, putting forth a plan for 31 senators, not the 30 which actually exist.

But we all make mistakes in arithmetic. The Apportionment Board need not be derided for its error. It need only be ignored for being irrelevant.

Thanks for reporting an error with the story, "Margolis: Why you shouldn’t care about the Apportionment Board"