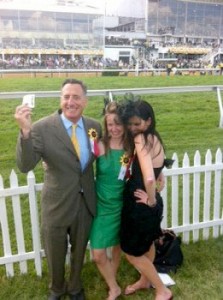 Gov. Peter Shumlin had never placed a wager on a horse before last weekend’s Preakness race, but he wasn’t betting on the buzz around a photo of the governor hugging two young women that went viral after it was published on the Burlington Free Press website.

The image shows the governor with Alex MacLean, his former campaign manager and now the Secretary of Civil and Military Affairs, and Liz Smith, a staffer for the Democratic Governors Association, celebrating his winning ticket. Originally posted on MacLean’s Facebook page, the photo pictured Smith in what one senior administrative official described as an unfortunate pose. The Free Press picked up the image shortly afterward with a short blog post about the Democratic Governors Association fund-raiser held at the Preakness Stakes Triple Crown race in Baltimore.

After the story was published, MacLean took the Facebook picture down. MacLean didn’t return a phone call for comment.

It didn’t take long, however, for the image to be snatched up by Shumlin’s political enemies. Darcie Johnston, a Republican political operative and founder of Vermonters for Health Care Freedom, used the photo to slam the Democratic governor for his single-payer style plan that passed in the House and Senate during the last legislative session. Shumlin will sign the bill tomorrow.

The email was sent out in a blast to Johnston’s LISTSERV on Tuesday. It featured a copy of the photo and several statements, starting with the headline: “Governor, please don’t gamble with Vermont’s health care system.”

“Clearly the governor loves to have a good time and play the ponies, but he is gambling with every Vermonter’s future when he rolls the dice on Green Mountain Care,” Johnston wrote.

In an interview, Johnston said Shumlin’s health care plan is complicated, risky and hard for people to follow.

“I thought it was a good opportunity to make a point,” Johnston said. “The bill the governor is signing on Thursday is going to put Vermonters’ economic future and their health care at great risk.”

Shumlin sees the hoopla over the photo as a distraction, a senior administrative official said. Critics aren’t able to attack the bill on the substance, and so are resorting to making hay from a shot of the governor celebrating his winning ticket, the official said. (The governor’s office hasn’t received any negative calls about the picture, which the official described as an unfortunate photo that shouldn’t have been put up on the Internet.) The groundbreaking bill to be signed tomorrow, H.202, the official said, will give Vermonters an opportunity to address health care costs.

The Chaffetz-Welch amendment gets an airing

An amendment proposed by Rep. Peter Welch, D-Vt., that calls for the withdrawal of troops in Afghanistan is to be debated on the floor of the U.S. House of Representatives this week.

Welch and a bipartisan group of five members of Congress sent a letter to their colleagues urging them to vote for the bill, which would authorize “the continued presence of only those forces directly involved in counter-terrorism operations.” The amendment also removes the power of the president to commit the nation to war without express approval by Congress.

Welch, et al., wrote that the effectiveness of U.S. nation-building strategy in Afghanistan is in question. According to the letter, Gen. David Petraeus has said there are fewer than 100 members of al-Qaida in Afghanistan. Meanwhile, the United States is spending $2 billion a week on the war there, according to Welch.

Lawmakers were expected to take up the amendments this week.

Green Mountain Power isn’t the only utility that has been in negotiations with NextEra for a long-term contract to purchase power from the Seabrook nuclear power plant in southern New Hampshire. David Hallquist, CEO of the co-op, said Vermont Electric Cooperative has been seeking, in separate talks, a deal with NextEra to purchase 10 megawatts of power from Seabrook.

Vermont Electric Co-op recently voted against a deal with Entergy Corp. that would have supplied the same amount of power for a 10th of a cent per kilowatt more.

Hallquist said the co-op had received letters from customers who were upset that the utility had passed up the Entergy deal. Now, Hallquist said, they know why.

Rowe to leave earlier than expected

Terry Rowe, executive director of the Vermont State Hospital, will leave her position May 28 – a few weeks earlier than anticipated in order to learn the ropes at her new job – as head of the child abuse registry. In the meantime, the Department of Mental Health has named Rebecca Hines, currently deputy commissioner for the department, as the interim director of the hospital.

The Institute for Policy Studies released a report this week, “Spent Nuclear Fuel Pools in the U.S.: Reducing the Deadly Risks of Storage,” that cites Vermont Yankee’s spent fuel pool as a significant hazard in the event of a natural disaster. The Vermont Yankee reactor is identical to the type (a Mark 1 General Electric model) used at Fukushima Daiichi in Japan where four of seven reactors partially melted down after an earthquake and  tsunami damaged the containment vessels.

According to the report by Robert Alvarez, a senior scholar for the institute, the Vermont Yankee reactor holds about 7 percent more radioactivity than the combined total in the pools at the four troubled reactors at the Fukushima site.

Storage for the spent fuel at Vermont Yankee and 31 other boiling water reactors around the country is inadequate.

As in Japan, all spent fuel pools at nuclear power plants do not have steel-lined, concrete barriers that cover reactor vessels to prevent the escape of radioactivity. They are not required to have back-up generators to keep used fuel rods cool, if offsite power is lost. The 69 Pressurized Water (PWR) reactors operating in the U.S. do not have elevated pools, and also lack proper containment, and several have large cavities beneath them which could exacerbate leakage.

The New York Times and the Christian Science Monitor both ran stories about the report.