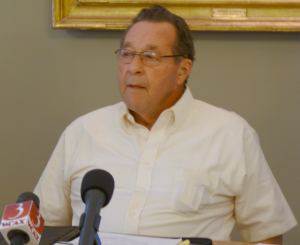 Tom Davis was Vermont's Human Services secretary in the 1970s

Editor’s note: If you have trouble hearing the audio on the youtube videos, try using earphones.

The state is putting dollars ahead of people. That was the message delivered by Public Assets Institute, a nonpartisan think tank that specializes in fiscal analyses of state government.

Budget 2011: Cutting the Commitment to Vermonters

which details how the Vermont Legislature and the Douglas administration have used budget cutting as the primary tool for resolving the state’s fiscal crisis. Vermont’s tax revenues have declined because of the recession, and this year the state faces a $154 million shortfall and an additional $100 million gap next year.

Over the last three years, the Agency of Human Services has been hardest hit, according to Hoffman. He said the House budget bill this year appropriates 16 percent less, nearly $80 million less, for human services than the Legislature did in 2008 (the beginning of the recession).

Meanwhile, demand for assistance programs has gone up. There has been a 20 percent increase, for example, in the number of households receiving aid through Reach Up programs, Hoffman writes.

Hoffman said the Snelling administration raised taxes and used rainy day funds to help bring the state out of a recession 20 years ago. The same tack, he suggested, could be taken now.

The report was unveiled at a press conference at the Vermont Statehouse on Wednesday and included three former Agency of Human Services secretaries: Con Hogan, Tom Davis and Cheryl Mitchell. 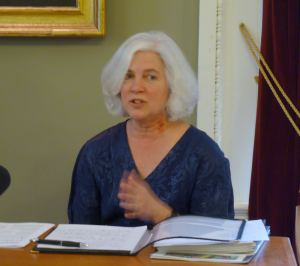 Hogan called the Challenges for Change proposal an “unconsidered, fundamental change in policy.” The Challenges, a government restructuring plan enacted into law in February, was initially a list of targeted outcomes paired with $38 million in savings in key services the state funds -- education, human services, corrections, contracts, economic development and natural resources. The Legislature asked the Douglas administration to come up with plans for executing the Challenges targets. Last week, the Douglas administration released a progress report on the Challenges that included very little detail about its plans to significantly change government programs. The report also came up millions of dollars short of the target number.

Hogan said the Douglas administration is disregarding the state’s obligation to the needy. He predicted that the Challenges mask as much as $200 million in cuts in state and federal funding over the next several fiscal years.

The Challenges proposals are “a rush to the bottom in a blind frenzy to cut budgets,” Hogan said.

The Legislature has given the administration carte blanche to make those cuts, Hogan said, and he deemed this decision “unprecedented and unwise.”

“It seems calculated to avoid responsibility,” he said.

Because policy is set through the budgeting process, Hogan said, he advised the Legislature to make prioritized line item cuts under the $38 million Challenges proposal that would detail the effects of the reductions on programs. At the same time, it should move ahead with the broader scope of the Challenges, and as savings are realized under the restructuring, these monies could offset budget cuts in priority order. This would, he said, put the entire budget on the table.

Full disclosure: Con Hogan is a member of the vtdigger.org board.

Thanks for reporting an error with the story, "On video: Analyst, former AHS secretaries say state's reneging on obl..."