The institution that will combine Vermont’s three residential state colleges into one school has a name: Vermont State University.

Following public comments that ranged from support for the name to condemnation, trustees of the Vermont State Colleges System unanimously voted for its approval during a special meeting Wednesday evening.

“Vermont State University capitalizes on the nationally and internationally known Vermont brand and highlights our connection to the state as a public higher education institution,” Board of Trustees Chair Lynn Dickinson said in a written statement after the vote. “In establishing the identity of the new institution, this is the first step.”

Beginning in the summer of 2023, Vermont State plans to consolidate three of the four schools in the Vermont State Colleges System: Vermont Technical College, Castleton University and Northern Vermont University.

Under the plan, each campus will remain open and the Community College of Vermont will remain as is.

The college system’s leaders have used “Vermont State” as a placeholder to refer to the new combined institution. A marketing firm advised they stick with the name permanently, finding that the name polled well among faculty, alumni and Vermonters.

But some, including a state legislator, questioned the process. More than 1,300 Castleton University alumni signed a letter last week requesting that trustees name the new school after their alma mater. And Rich Clark, a professor of political science at Castleton University and the director of its polling institute, cast doubt on the accuracy of the firm’s polling.

Clark was one of 20 people that offered public comment at the two-hour meeting Wednesday. While every speaker voiced thoughts on the name, nearly all of their comments drifted from the vote at hand to concern about the merger itself.

Meaghan Meachem, an associate professor of journalism at Northern Vermont’s Lyndon campus, said she supported the Vermont State name, but urged trustees to facilitate a smoother transition than the combining of Johnson and Lyndon state colleges, which she said diminished each school’s most acclaimed programs.

“We are depending on you to really do it right this time,” Meachem said.

“VTC is a different school than the other colleges,” Wilkinson said. “We’re a technical school, and losing that part of our name ends up stripping us of who we are.”

State Sen. Cheryl Hooker, D/P-Rutland, suggested placing the names of each campus before the Vermont State label as a way to emphasize each campus’s distinctiveness.

But State Colleges Chancellor Sophie Zdatny shot down the suggestion. “I just don’t know how that would work,” she said.

Andre Fleche, a history professor at Castleton, criticized the move to unify under a single brand, advocating instead for a campus-by-campus incorporation of the Vermont State name, akin to the State University of New York system.

“There is no financial reason to insist on a completely centralized brand,” Fleche said.

But multiple trustees objected to the SUNY comparison, noting that Vermont State will be a single school with one student body, as opposed to a network of colleges with shared administrative oversight.

Despite the differing points of view at the meeting, a number of speakers and trustees stressed the importance of unity as the three colleges prepare to unite.

“As we move forward, we’re in this together. We all need to work together,” said Steve Cormier, a Lyndon State alumnus and member of the former college’s alumni council. “I hope that we can do that, and I hope we get it right this time.

Thanks for reporting an error with the story, "Combined state colleges to be named Vermont State University"

By Liora Engel-Smith and Riley Robinson

Rutland schools estimate $184,000 needed to change from ‘Raiders’ to ‘Ravens’

As city-ordered deadline passes, Sears Lane campers are set to move out 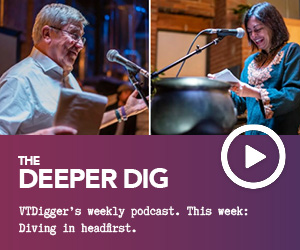 Bob Stannard: They didn’t teach us about Trump at Boys State

Elayne Clift: Whatever happened to equal pay for equal work?

Paul Dragon: Because of the housing safety veto, people are at risk

Brenna Galdenzi: Why I dedicated my life to ending wildlife trapping