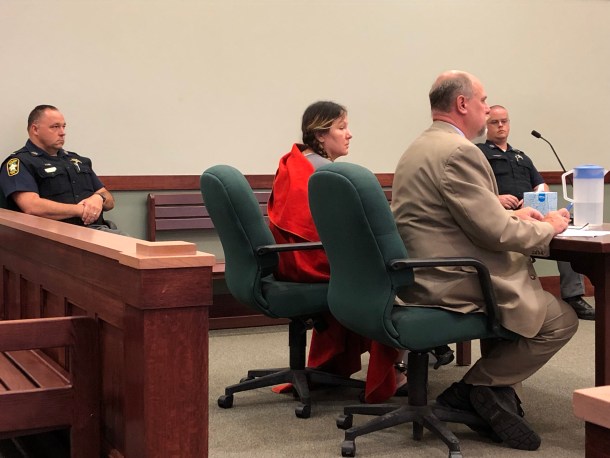 Kristie Buzzeo sits next to her lawyer at her arraignment on charges that she attempted to murder her 3-year-old son, in Rutland on Tuesday afternoon. Photo by Ellie French/VTDigger

This story has been updated.

[R]UTLAND — A Rutland woman pleaded not guilty Tuesday to the attempted murder of her 3-year-old child in an incident that occured more than three months ago.

Kristie Buzzeo, 36, was arrested Monday, having just been discharged after several months of psychiatric treatment at the Brattleboro Retreat, a specialized mental health and addiction treatment hospital, where she told a doctor that she was trying to kill her son to keep his father away from him, according to an affidavit filed in the case.

Buzzeo allegedly barricaded herself and her son inside the bathroom of her apartment on April 23 for 24 hours, slitting her own wrist and those of her child, before police forced entry and brought the child, who had “serious physical injuries” to the hospital for surgery, according to police.

Judge Cortland Corsones ordered that Buzzeo be evaluated for competency and sanity, and held without bail pending a weight of evidence hearing, calling the case “a very serious assault of a very vulnerable child.”

Chris Perkett, the public defender representing Buzzeo at the arraignment, asked for Buzzeo to be released on strict conditions so that she could continue to receive medication and follow-up treatment at Rutland’s Crisis Stabilization and Inpatient Diversion program. There, Perkett said, she would have a place to live at a staff secure facility, and not face any concerns about a gap in her medications, which he said are “significant.”

“At least in the opinions of the doctors at the Retreat, she isn’t a threat to herself or others or they wouldn’t have discharged her,” Perkett said.

But State’s Attorney Travis Weaver argued that the state would like time to investigate the CSID facility. He also said it’s his understanding that Buzzeo would have no problem continuing to receive her medications if she were to be held without bail.

Corsones ruled in the state’s favor, saying that at the weight of evidence hearing he hopes to hear from representatives at CSID and Brattleboro Retreat to understand how secure CSID’s facility is, and how much a threat Buzzeo poses to herself and to the public.

“We simply don’t have that information available on short notice,” Corsones said.

The affidavit in the case notes that when the child was found, he had lacerations on both wrists. On his right wrist, two lacerations, each almost 5 centimeters, long formed an X, while his left wrist had a diagonal laceration 3-4 centimeters long.

He also had 20-30 scratches and abrasions on his stomach and back, according to the affidavit. The nurse who first saw the child told police it looked like someone intentionally scratched him, and said the child was covered in dried blood from “head to toe,” including on his clothes, face, hands and feet.

Buzzeo and her son had been staying at her neighbor’s apartment the night prior because she was afraid to stay at home, according to the affidavit. She reportedly told her neighbor that someone was chasing her with a gun and that she was scared. When Buzzeo ultimately left the neighbor’s apartment, she took a butcher knife from his kitchen cabinet with her. 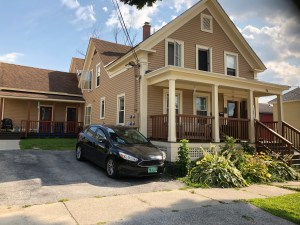 The apartment at 76 Williams St. in Rutland, where Kristie Buzzeo allegedly barricaded herself and her son in the bathroom. Photo by Ellie French/VTDigger

Police asked Buzzeo if she had a knife, which she denied, but said the man in the bathroom had either a knife or a gun. While in the bathroom, she repeatedly asked the male she said was in the bathroom to kill her, saying “shoot me, shoot me,” according to the affidavit. She also said she received a text saying “they were going to kill her and take her son,” which she says could have been from her ex-boyfriend.

Buzzeo, originally from Connecticut, reportedly moved to Vermont to escape an abusive relationship.

A mental health official came to the scene and determined that Buzzeo was suffering from hallucinations, according to the affidavit. At that point, police decided to force entry into the bathroom to check the welfare of the boy.

Once police were inside the bathroom, Buzzeo repeatedly asked the officers to shoot her, and began to talk about her child, saying, “I couldn’t hurt him and make him suffer. Oh my god, that was all for nothing, they are going to get him anyway. Please don’t save him and let me die too.”

The child got stitches for the cuts on his wrists, and was ultimately placed into the custody of the Department for Children and Families. Doctors said the lacerations could have been life threatening if police did not intervene when they did, noting that no major arteries were cut. One doctor said that the child will likely need occupational therapy for his wrist and hand to work correctly after healing.

On Monday, Buzzeo was located by Rutland police and taken to the police station, where she waived her Miranda rights and agreed to speak about the incident. She said she does not remember the events of April 23, or how she got the marks on her wrist. She said a few days before the incident, she saw a stranger looking through the window of her apartment and it triggered a psychotic breakdown, which she was hospitalized for, just days before the incident.

The affidavit says Buzzeo was hospitalized on April 21, but it does not indicate when she was released.

Buzzeo told police she remembers going to her neighbor’s apartment, but only remembered him “yelling a lot and talking about God.” She said she doesn’t remember how her son got the scratch marks, and said she believes they are from him scratching his back and not putting lotion on after a bath.

While at Brattleboro Retreat, Buzzeo told a psychiatrist that if she found out her son’s father was involved in any portion of the family court proceedings and if he had contact with her child, that she would try to find the child and hurt him so the father would not be able to have contact, the affidavit said. She also told the doctor that she was trying to kill her son to keep the father away from him.

Buzzeo was charged with attempted murder, cruelty to a child, and aggravated domestic assault. If found guilty of attempted murder, Buzzeo faces a maximum of life in prison and a mandatory minimum sentence of 20 years.

Thanks for reporting an error with the story, "Rutland woman charged with attempted murder of 3-year-old son"