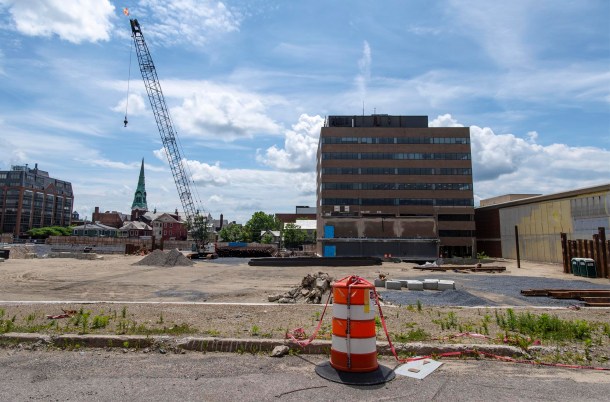 The CityPlace construction site in Burlington in June. Photo by Glenn Russell/VTDigger

BURLINGTON — CityPlace Burlington, the stalled major downtown development project, will be redesigned and likely made smaller.

Brookfield Asset Management announced Friday that the redesign will cause additional delays to the start of construction on the site of the planned $220 million, 14-story development, and Mayor Miro Weinberger said Brookfield was considering a development smaller than the planned 14 stories.

“Over the next several months, we will be working collaboratively with the administration and stakeholders to refine our development plan to ensure we have a design that is consistent with the community’s values and goals,” Chelsea Ziegelbaum, Brookfield’s project manager, said in a statement. “We will take a holistic approach to the development by considering all opportunities from Church Street to the former Macy’s building.”

Burlington Mayor Miro Weinberger said in a statement Friday that Brookfield had also taken full control over the project from developer Don Sinex, and a new design could address community concerns about the project’s size.

“Last week, Brookfield made it clear to us that the options it is considering for overcoming the project’s financial challenges also would address some of the size and scale criticisms of the project,” Weinberger said.

These changes would also address concerns from transportation and climate advocates that the planned parking garage is “far larger” than it should be, Weinberger said.

The announcement comes days after a closed-doors update on the project from consultant Jeff Glassberg to the City Council. Before that update, an architect working on the project said that Brookfield had told Sinex that the design changes would be “extensive.”

The redevelopment project has sat vacant since the demolition of the former mall was completed in August. The $220 million development was planned to feature retail, offices and housing in the heart of Burlington’s downtown, and the city is poised to spend $22 million in tax increment financing on infrastructure improvements alongside the project.

The redesign will delay the start of the construction, Ziegelbaum said.

“We recognize that this process will require additional time before construction can commence and we appreciate the community’s patience as we work toward a conclusion,” she said.

Weinberger said in a statement that he was “frustrated” by the additional delays but believed the city “at least for now” should continue its collaboration with Brookfield.

“Brookfield’s statement today and recent actions demonstrate that there remains potentially a very good path forward with them to transform this long-troubled site into a vibrant, mixed-use neighborhood,” he said.

Weinberger also said that Brookfield had recently taken over “all of the responsibilities of project developer from Don Sinex.”

“Brookfield is an experienced and very well-capitalized company, and the administration has found the Brookfield team to be well-resourced, predictable, and responsive since they took the lead in January,” he said.

Any revised design will also allow the city to reconnect Pine and St. Paul streets, Weinberger said, which the city is using.

Ziegelbaum said that the company has been unable to start construction to date because of the project’s complexities and cost, but reiterated that Brookfield was committed to it.

“We will leverage Brookfield’s extensive operating platform, significant expertise across all product types and ensure we are looking exhaustively at all opportunities to advance the project,” she said.

Weinberger said that while the city considered other options, but believe alternatives would lead to even lengthier delays.

“To understand the City’s positions and postures towards CityPlace it is important to remember that, but for the new public infrastructure that will be built, this project is a private development on private land that requires investment of hundreds of millions of dollars of private capital,” he said. “The City does not own the site or have the right to direct who develops it.”

A spokesman for the University of Vermont Medical Center, the largest CityPlace tenant under the most recent plan, said officials there were “concerned about the delay, but look forward to learning about potential options that may be able to meet our needs within our time constraints.”

The medical center, which had planned to rent 100,000 square feet of office space, “will continue to work with the developer to determine what is possible going forward,” said Michael Carrese.

Late last fall, Brookfield became more involved in the day-to-day management of the project, and at a January City Council meeting a Brookfield representative said the company was completely committed to the project.

While Sinex told VTDigger in March that construction would restart May 6 and Brookfield said it was aiming for a June 1 restart, both of those dates have passed without construction activity. In April, Will Voegele, the senior vice president for development of Brookfield Properties, said he could not provide a construction restart date.

After Brookfield’s increased involvement, many city officials and business leaders were feeling more confident about the project’s future. But their patience has been growing thin as more time has passed without construction activity.

Attorney John Franco, who has been representing project opponents, said that he and his clients saw down-sizing as a positive development.

“If this project is right-sized, I think that’s a win for everybody, that’s what my clients were always interested in,” he said. “At a broader level, people were saying for a long time it was too big for Burlington and it wasn’t going to work, and that turned out to be the case.”

Franco said he expected it to take 18 months to two years for the permit-amendment process for the original plan and the initial permitting of plans for the rest of the property, which includes the old Macy’s building.

He said that if the developers try to get the city to sign off on changes without the full process, they’d find themselves back in court.

“If they try that they’re going to be in court for the next decade,” he said. 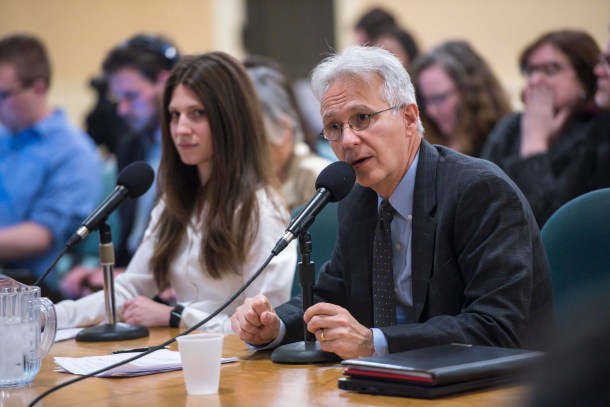 Will Voegele of Brookfield Properties speaks before the Burlington City Council about the status of the CityPlace Burlington project on Monday, April 29, 2019. Photo by Glenn Russell/VTDigger

In his statement, Weinberger also demanded that Brookfield provider a fuller update “as soon as possible” including the illustrations of the project changes the company is pursuing and a general project timeline. The update should also include plans to minimize the impacts on the public during the construction period.

Councilor Karen Paul said that she believes Brookfield is listening to the concerns from the city and public, and has the resources and reputation to get the project done.

“Obviously the financial challenges are significant enough that they have been re-assessing and re-evaluating,” Paul said. “And that’s a good thing for this community, we do not want a project that can not be sustained long-term.”

Paul said she appreciated that Brookfield would be aiming to utilize the full site in its new design and that she believed that approach would be well received by the community.

Councilor Max Tracy said he does not believe that Brookfield provided enough information in its update to change his outlook on the project.

“With this update, I don’t think they necessarily provided us with a degree of specificity that, at least for me, would give me a heightened degree of confidence in the project,” he said.

Tracy said that he wants Brookfield to specify the causes of the delays, how it will address those challenges, how the company will seek public input in the redesign and how Brookfield will mitigate the impacts of the additional delays.

“I still don’t have confidence in their ability to execute based on the past year of non-update updates and failures to meet commitments they’ve made to the public and the city,” Tracy said.

Tracy said he would “welcome” a smaller project since the height of the project has been a concern of his since the start. But he said it was frustrating that the developers had said a project shorter than 14 stories would not be viable when pitching the project.

“It’s positive that they want to scale it down but it’s also frustrating because if they had been more responsive to that feedback from the beginning we may have found ourselves in a very different place than we are now,” Tracy said. 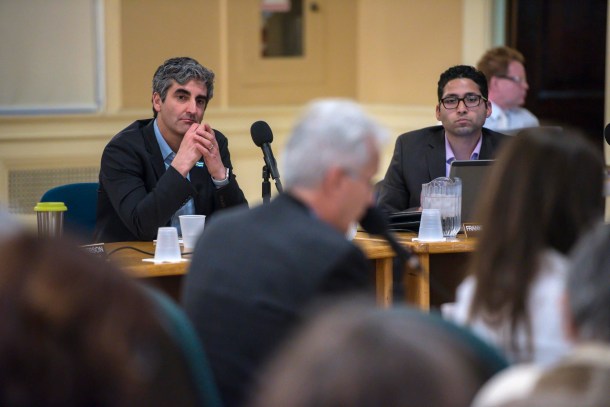 Burlington Mayor Miro Weinberger, left, and City Councilor Franklin Paulino, right, listens to Will Voegele of Brookfield Properties as he briefs the council about the status of the CityPlace Burlington project in April. Photo by Glenn Russell/VTDigger

Councilor Joan Shannon said she thinks a lot of people supported the redevelopment to “get something done” but were not necessarily for the scale.

“I think a smaller project would make a lot of people in Burlington happy,” she said.

Shannon said she sees two possible paths going forward: either Brookfield completes the project, or the land is sold to another developer. But she thinks the likely scenario is that the CityPlace will go forward with Brookfield at the helm.

“Having to take a step backwards, honestly I don’t find that to be a huge surprise,” she said.” In a development of this scale, there are bumps in the road.”

Kurt Wright, R-Ward 4, said he’s concerned the announcement about a redesign could mean going back to “square one.” Wright said he would like more details and wishes Brookfield would have held a press conference to take questions and be more open about the project.

“We can’t continue to spin our wheels endlessly here,” he said. “We’ve got to see some forward movement and they have to be transparent to the public.”

“It’s frustrating that those who were proponents of the project, initially in response to community concerns about the height of the project, from developers we kept hearing over and over that the project wouldn’t work economically without that height,” he said. “Now we’re hearing the opposite, so clearly that wasn’t true.”

Tom Torti, president of the Lake Champlain Regional Chamber of Commerce, said he’s glad Brookfield has come forward with a public update on the project.

“I think many residents and members of the business community have been waiting to hear from them,” he said. “Without a statement, people are left to fill in the blanks themselves.”

Torti said he’s not surprised to hear the project will be redesigned and possibly scaled down. The development market and prices of materials have shifted since CityPlace’s initial approval, he said.

“I think that’s just the natural ebb and flow of how long it has been from conception to today,” Torti said.

He said he believes Brookfield is moving towards honest and transparent community engagement.

Kelly Devine, executive director of the Burlington Business Association, said her reaction to Brookfield’s announcement was one of “relief.”

“It’s better to have some information rather than none,” she said. “I think people have been waiting to hear that.”

Devine said downtown businesses are anxious to see CityPlace move forward, and welcome changes to the project which allow it to advance.

“If Brookfield can come up with something which tries to address some of the citizen concerns, I think that’s a win for the community overall,” she said.

Alexandre Silberman contributed reporting. This story was updated at 1:30, 2:40 and 4:50 p.m. Friday with additional reaction.

Thanks for reporting an error with the story, "Stalled downtown Burlington development to be redesigned and reduced ..."