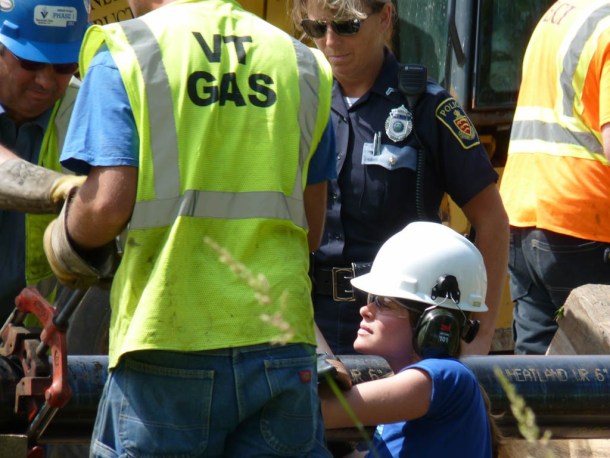 A demonstrator was arrested in a protest in 2015 after locking her arms around a length of pipe at a Vermont Gas worksite. File photo by Sam Heller

[O]pponents of a controversial gas pipeline will be allowed to weigh in on a proposed consolidation involving the pipeline’s owner and the state’s largest electric utility.

Canadian investment holding company Noverco is seeking approval from the Vermont Public Utility Commission for a $1.2 billion buyout of another company — a move that would give it 100% ownership, through a series of subsidiaries, of Green Mountain Power and Vermont Gas.

Earlier this month, a group of GMP and Vermont Gas ratepayers filed a motion to intervene in the review process. They say the corporate reshuffling will increase the influence of Canadian fossil fuel pipeline company Enbridge on the Vermont utilities. Enbridge, through a subsidiary, owns 38.89% of Noverco.

Their fear is that Enbridge, which they refer to as one of “the world’s powerhouses of fossil fuel transmission and distribution,” will leverage its increased ownership to push for more natural gas distribution in Vermont, according to the motion to intervene.

Lars Bang-Jensen, a hearing officer with the state’s Public Utility Commission, issued an order last week granting 19 ratepayers the opportunity to present testimony and ask legal questions in the case.

The move has drawn the ire of environmental activists because Enbridge, a large Canadian natural gas and oil company, is one of the main owners of Noverco. If the PUC signs off on the buy-out, Enbridge’s indirect ownership of GMP and Vermont Gas would increase from 27.61% to 38.89%, according to testimony from Renaud Faucher, president of Noverco.

The acquisition has already been approved by the Federal Energy Regulatory Commission and the Quebec Superior Court.

Faucher said in a PUC filing that the change in ownership is “very remote” and will have “no impact” on either Vermont Gas or Green Mountain Power. Valener and Noverco hope to close the transaction this summer, he wrote.

“This transaction will simplify the corporate structure of Energir, L.P., increasing the ability of the organization to respond more quickly to market opportunities,” wrote Faucher.

The group of ratepayers, however, claim in their motion to intervene that they can show that Vermont Gas’ Canadian owners have exercised “significant involvement and interference” on the company’s management. They say that they already have evidence of parent company’s Energir’s control on Vermont Gas through documents obtained through litigation related to the construction of the controversial pipeline that runs from Colchester to Middlebury. 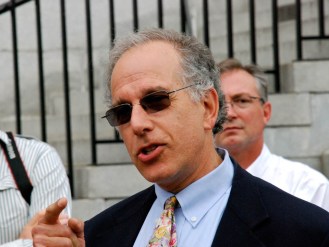 “Intervenors will be harmed if the petition is granted and Enbridge gains greater incentive or ability to place its thumb on the scale of (Vermont Gas’) and GMP’s decision-making — and thereby increase the transmission or distribution of natural gas in or through Vermont,” the group’s attorney James Dumont wrote in the motion to intervene.

“(Vermont Gas) is led by a team of dedicated Vermonters and over 130 caring individuals who work hard every day to deliver a clean and more affordable energy option,” she said.

She added that the utility, which currently operates in Chittenden, Franklin and Addison counties, has “no plans” to expand the Addison County transmission pipeline.

A GMP spokesperson said last month that the changes will have no impact on how the electric utility runs.

The intervenors also claim that the petition raises bigger questions about GMP and Vermont Gas being owned by the same parent company. 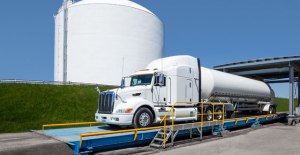 In 2007, the PUC approved the acquisition of Green Mountain Power by Energir, then called Gaz Metro. One of the factors the PUC looked at was whether the acquisition could lead to anti-competitive behavior between GMP and Vermont Gas, according to the PUC’s order approving the transaction.

“However, the evidence suggests that, due to differences in the end uses of electricity and natural gas, the actual effect on competition would be very small,” the commission wrote.

Dumont said that this conclusion should be re-examined with the advancement of cold climate heat pumps — a form of electrical heating.

“Will it make a big difference, I don’t know,” Dumont said of Enbridge’s proposed increased ownership stake. “But we do know the world has changed since the PUC last looked at if the same company should own a gas and electric utility.”

David Farnsworth, principal at the clean energy government advisory organization Regulatory Assistance Project, said the state’s utility regulators should be asking the Canadian parent companies tough questions about their motives behind the acquisition.

“There’s this larger question: what are you guys really planning on doing?” he said. “Are you just going to hunker down and go full throttle with natural gas?”

Farnsworth also said the state should consider reviewing the long-range planning documents the utilities have to file every three years as though they were from one company.

“Exploring this separately with GMP and (Vermont Gas) makes less and less sense,” he said.

He added that the joint ownership of the utilities — and the size of their parent companies — raises questions about how much power the “little fish” of Vermont has to regulate these companies.

“When you have that concentration, you’ve got to ask yourself: what are the political implications of this?” he said. 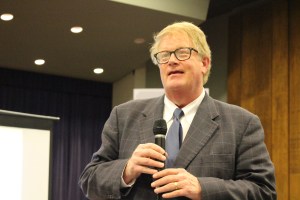 James Porter, director of the Public Advocacy Division of the Department of Public Service. File photo by Mike Polhamus/VTDigger

The Department of Public Service filed an initial round of discovery last Friday, seeking information about the board membership of GMP, Vermont Gas and their parent companies, as well as any guidance they may have provided to the Vermont utilities.

The intervenors also filed a discovery request, seeking years’ worth of corporate communications, particularly around the Addison County pipeline expansion.

Thanks for reporting an error with the story, "Regulator allows activists to weigh in on Canadian power deal"