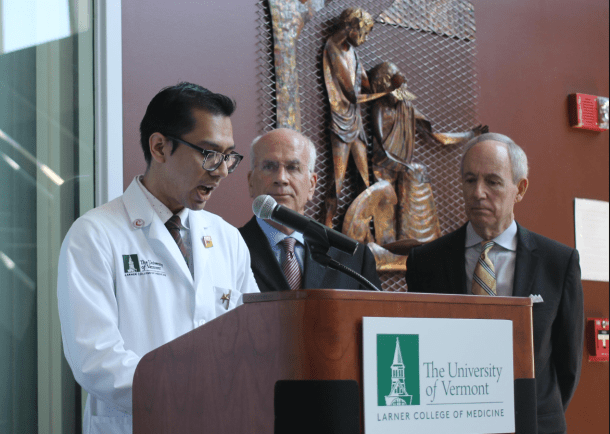 Editor’s note: Luke Zarzecki is a reporter with Community News Service, a project of the University of Vermont’s Program in Reporting & Documentary Storytelling.

[B]URLINGTON — Days after the U.S. House passed legislation to extend protections to undocumented immigrants who arrived as children, Rep. Peter Welch joined University of Vermont officials and a medical student who would be impacted by the bill to tout the measure.

“If a child is brought over by a parent, that child is not responsible for the decision that the parent made. Why do we have a policy that punishes an innocent person?” Welch, D-Vt., said.

Immigration policy regarding young people in that position, known as “Dreamers,” has been under discussion in Washington for years. But creating a path to citizenship has become a more urgent goal for Democrats since President Donald Trump rolled back an Obama-era program in 2018 that extended temporary protection to some young immigrants.

Earlier this week, the House passed the Dream and Promise Act which aims to put undocumented immigrants who came to the U.S. as minor children on a path to U.S. citizenship.

The bill passed, 237-187, with mostly Democrats and seven Republican members in favor. The act now goes to the Senate where Welch told a news conference Friday that he hopes majority leader Sen. Mitch McConnell, R-Ky., will steer it to a vote.

At Welch’s side stood Juan Conde, a “Dreamer” and student at the University of Vermont’s Larner College of Medicine. Two years from becoming a doctor, Conde said he hopes to specialize in oncology and work on a cure for cancer, an interest stemming from his late mother’s battle with cancer.

Conde came to the United States from Mexico with his mother when he was only 9, and against steep odds, earned a Ph.D. in biochemistry. That paved the way for him to be accepted into medical school.

One of the main reasons that Conde said he chose UVM was because he felt as if Vermont was a safe and welcoming place.

“I feel like this school really embraces DACA students,” Conde said, using the acronym for the Obama-era Deferred Action for Childhood Arrivals program.

Although Conde said he does feel safe, the obstacles that DACA residents and students face are still prevalent in his life. For Conde and many other students, one of the biggest struggles is paying for college.

According to Marie Johnson, UVM’s director of student financial services, DACA students do not qualify for federal or state financial aid, unless they have a Social Security number. They do qualify for university grants and scholarships, she said.

Conde explained that making ends meet is difficult with little access to private loans and navigating a medical school schedule that leaves little time for a job.

UVM President Tom Sullivan also addressed Friday’s news conference. When asked whether DACA students qualify for financial aid, Sullivan referred to it as an “open question.” However, he added that the university can help students in those circumstances in other formal ways.

The university does not disclose any information about students unless directed so by a subpoena issued by a federal court, Sullivan added.

Although there are no programs tailored for “Dreamers” in particular, Sullivan said DACA students have access to all of the services that other students have. “All the way from legal advice to counseling, anything we can do to contribute to their success and safety is our obligation,” Sullivan said.

Welch said he does not know whether McConnell will bring the legislation up for a Senate vote.

“America wants it, our citizens want it, Republicans — when I talk to them privately — want it, so it is up to Sen. McConnell if he will let us have it,” Welch said.

Welch said he believes that the issue of DACA is separate from other immigration issues. He said he disagrees with policy that punishes children for actions their parents took.

The lawmaker’s visit to Burlington Friday also included a luncheon address to the Vermont Association for Justice and a visit to electronics manufacturer Dynapower, both in South Burlington.

Thanks for reporting an error with the story, "Welch touts House-passed Dreamer bill"