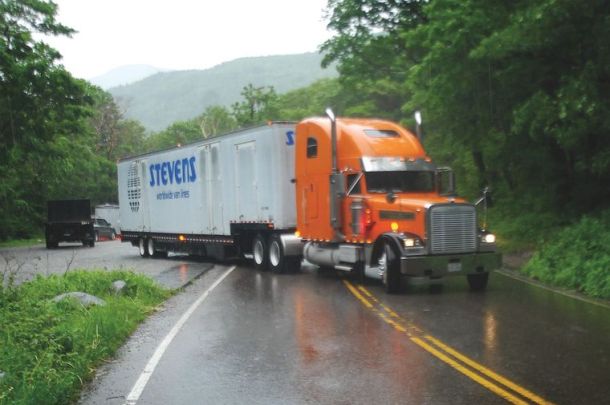 A tractor-trailer backs into the parking area at the top of Smugglers Notch on a June morning in 2015 after the driver realized that the Notch Road is too narrow and winding for trucks like his. It managed to reverse course and head back to Jeffersonville. File photo by Glenn Callahan/Stowe Reporter

This story by Caleigh Cross was published by the Stowe Reporter on May 30.

[S]mugglers Notch hasn’t been open for a month yet, and already two tractor-trailer trucks have gotten stuck on the narrow, winding road.

Route 108 through Smugglers Notch is closed every winter because it’s impossible to deal with the rugged weather at 2,160 feet above sea level. The Notch road reopens once the ice is gone; this year, it opened May 15.

On average, seven tractor-trailer trucks get stuck in Smugglers Notch every year, said Ernie Patnoe, maintenance transportation administrator for the Vermont Agency of Transportation, which oversees Route 108, which connects Stowe and Cambridge.

Rescuing those vehicles takes hours away from the other things that Vermont State Police and Stowe police could be doing, and it’s a huge inconvenience when an oversized vehicle clogs the notch. Drivers of regular vehicles not only can’t get through the Notch, but they have to get out of the way while a tractor-trailer truck tries to back down the mountain.

Fines can be up to $2,000 for truckers who venture into the Notch despite signs warning them the route isn’t passable for vehicles that large.

Two years ago, VTrans discussed putting in a chicane — a maze-like structure that cars and pickup trucks can get through, but nothing larger — in an attempt to keep trucks from attempting the Notch, but Patnoe says those discussions stalled because the area is too small to install one.

“The chicane was a good idea until we start realizing the amount of property it would take to put in a chicane. You would have to put in a chicane and then a go-around,” Patnoe said, and there just isn’t room, particularly on the Cambridge side of Smugglers Notch, which is where Stowe Police Chief Don Hull says most trucks get stuck.

Only about a quarter-mile of Smugglers Notch is in Stowe. 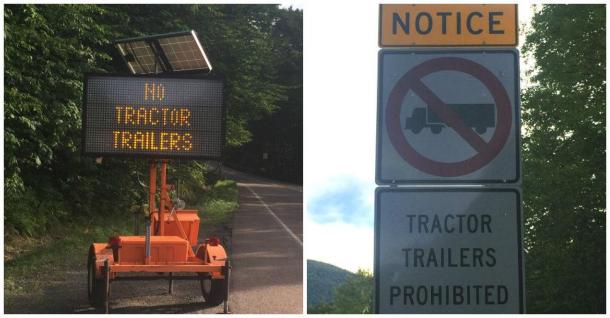 Patnoe says this year, attempts to keep tractor-trailer trucks out of Smugglers Notch will be “status quo.”

That means three metal signs — one at the bottom of Mountain Road, one near Weeks Hill Road and one at Barnes Camp — will warn tractor-trailer drivers not to attempt the Notch, and two flashing message boards on each side of the Notch will remind them.

And last fall, “No Tractor Trailers” was painted directly onto Route 108 on both sides of the Notch, Patnoe said.

“At this point in time, we just can’t drive for these folks. The signage is there; there’s just no way they can say they didn’t see it,” he said.

He thinks tractor-trailer truck drivers try the Notch because it is much shorter than the alternatives for traveling between Stowe and Cambridge.

“The only thing I can say is we can’t hold the steering wheel for these folks,” Patnoe said.

Thanks for reporting an error with the story, "Stuck trucks botch Notch despite VTrans bans, fines and signs"