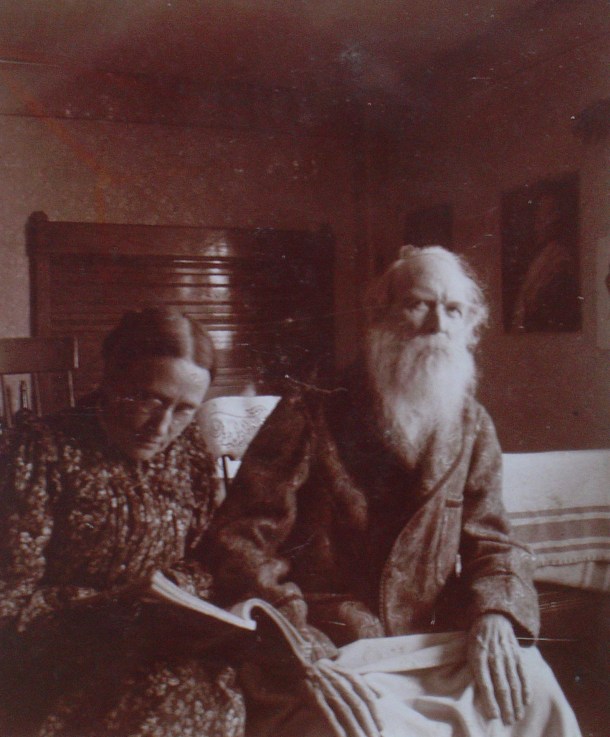 Rowland and Ann Robinson sit together in a room at the Rokeby farm in Ferrisburgh. The farm is now a museum. Rowland, who during his lifetime was the most famous Vermont writer, was born in the room in 1833 and died there in 1900. Photo courtesy of Rokeby Museum.

[R]eading a well-written history can be exhilarating. At its best, history gives the reader a giddy experience akin to time travel. Truth be told, however, it is novelists who often manage this time-traveling trick best. Novelists might not relate all the facts exactly as they occurred, but many of them are remarkably adept at reproducing the feel of an era. That’s why if you want to experience old Vermont – say, the 19th century – your best guide might be Rowland Robinson, who was once the state’s most famous writer.

Today, Robinson is largely unknown, even in his home state. If you want to get to know him better, read a collection of his stories called “Danvis Tales,” which was edited by the late David Budbill, the famed Vermont poet, and published in 1995.

Budbill argued in his preface to the book that Robinson has been ignored because he was a common man writing about other common people. “Had Robinson lived in Paris or New York and written about Vermont, or lived in Vermont and written about Paris or New York, he might have gotten on better with the literary snoots,” he wrote. “Also, the popularity Robinson’s books enjoyed with ordinary folks both during his lifetime and shortly after no doubt convinced many of the elite that he could not have been, by virtue of his popularity with the commoners, a really serious writer.”

For years, Robinson had no intention of being a serious writer, or any kind of writer at all, for that matter. Born into the town of Ferrisburgh in 1833, Robinson lived on the family farm and only occasionally attended school, where he was apparently uninterested in his studies. He was, however, passionate about the natural world, which he captured in sketches.

His drawings proved promising enough that a draftsman in New York City agreed to teach him drafting and engraving. But Robinson never sold enough illustrations to make a go of it, not that he didn’t try. Until he was 40, Robinson kept leaving his family’s prosperous farm and giving the city another shot.

Once he returned to Vermont for good, his wife, Anna, urged him to try a new art form: writing. Robinson had worked with words before. Fifteen years earlier, he had written an essay about the early history of Ferrisburgh for Abby Hemenway’s Vermont Historical Magazine.

Soon after he began writing in earnest, publishers who had rejected his etchings suddenly began accepting them when they came accompanied by his prose. Robinson’s work appeared in national magazines including The Atlantic, Scribner’s and Forest and Stream, which would later became part of Field and Stream. He never made much money from his work–the farm subsidized his career–but his stories of everyday life developed a wide following.

As he approached 50, Robinson’s interest turned to fiction, and he began to write about events in the fictitious Vermont town of Danvis. Many of the events are described by the town’s residents themselves as they gather in the evening at a local store or around a campfire and swap hunting and fishing tales. Robinson doesn’t offer a sentimental vision of Vermont; instead, he lays the tensions bare, showing strains between sexes, races and even nationalities. For example, Robinson has a character explain that in some ways French Canadians–whom he calls “Canucks”–do things “like white folk.”

In addition to 19th century racial attitudes, Robinson looks at regional differences in pre-Civil War America. When a Southerner ventures into Danvis in search of a missing slave, one Vermonter criticizes others for helping: “I don’t lay it up so much ag’in that other feller, for that’s the way he was brought up; but you – V’monters – hunting n…..s! Damn ye!”

Robinson was apparently sympathetic to the plight of blacks. He grew up in a strongly abolitionist Quaker family. The family farm, called Rokeby, was a stop on the Underground Railroad for runaway slaves heading north, and is today a museum.

His stories show readers the ways Native Americans contributed to the lives of early Vermonters, teaching them how to make things like traps, toboggans, snowshoes and canoes.

You can also see that even then people were affecting, and often harming, the environment. Robinson describes how people would shoot incredible numbers of fish in Lake Champlain. “There were too many pickerel, and always would be. There could be no exhaustion of the supply of them nor of any other fish. Any proposition to protect fish and game of any kind, to prescribe any method of taking, to limit the season of killing, would have been althought an attempt to introduce hated Old World laws and customs. Hunting and fishing were the privileges of every freeborn American, to use or abuse whenever, wherever, and however he was disposed. And he could not live long enough to see the end of it, for why should there not always be fish and game as innumerable in all these acres of water and marsh and woods? Alas! why not?”

In another scene, Robinson tells how some sadistic Vermonters took pleasure in slaughtering deer. When the snow crusted over, they would strap on snowshoes, walk into a deeryard and kill the animals as they clumsily tried to escape. Robinson has a character describe the scene: “critters ’at went on tew legs an’ called themselves men … useter go aout in Febwary an’ March an’ murder the poor creeturs in their yards with clubs, twenty on ’em in a day, when they wa’n’t with skinnin’ fur their skins.”

That kind of dialogue – depicting his characters’ accents – can be a bit much to wade through at first. But once you get the hang of it, you might appreciate the way Robinson renders dialogue phonetically. After a few pages, you start hearing the distinctive pronunciation of these long-gone Vermonters, and will perhaps recognize muted versions of the sounds you hear from people you speak to every day.

You’ll also encounter expressions you’ve probably never heard, like the exclamations “by the Lord Harry,” “good airth an’ sea,” or “gosh all fishhooks.” Or the stingy person described as “tighter ’n the bark tu a tree.” Or the older version of our expression “different strokes for different folks,” which Robinson wrote as “everybody tu their notion, ’s the ol’ woman said when she kissed her kyow.”

That Robinson was able to switch from an art form that relied on his eyes to one that required a good ear is remarkable and fortuitous. His eyesight began to fail when he was 54, probably due to glaucoma, and it was gone by the time he reached 60.

But he devised a way to keep writing. He would lay his paper on a grooved board that helped him write in a straight line and prevent him from writing over words. His wife, Anna, would read the draft for Robinson to edit, then she would copy it over and send it to a publisher. Her duties didn’t end there. When Robinson was hired by the Houghton Mifflin Company to write a history of the state, Anna conducted the research.

Robinson was stricken with cancer in 1899. During his last year, he lay in his room, doing what he liked best, writing. When he died, the Vermont Legislature passed a resolution stating that “we feel that Vermont hath lost an eminent citizen whose literary work has added to its wealth and renown.” Lawmakers praised his “genial disposition, high character, and genuine worth … which will forever preserve his memory in the hearts of the sons and daughters of the Green Mountain State.”

Thanks for reporting an error with the story, "Then Again: The life and legacy of Rowland Robinson"