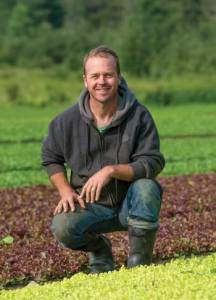 [T]he owner of a large Vermont organic vegetable farm said he’s been “sick to my stomach” since learning plants he thought were hemp had tested positive as high-grade marijuana.

Pete Johnson said Friday he was “blown away” when he was shown that one of the 230 plants he grew at his Craftsbury farm last summer and fall had a 21 percent level of THC, 70 times higher than what would be allowed in hemp production.

“That’s when I realized this was a big deal,” said Johnson. He learned of the test results earlier this week from a representative of Heady Vermont, a pro-cannabis website that first reported the story.

Johnson owns Pete’s Greens, a certified organic, four-season vegetable farm. He said he is concerned vendors and the public will think he grew the pot on purpose.

The plants were provided by Champlain Valley Dispensary, a medical marijuana supplier that also offers CBD products that do not contain high levels of THC, the psychoactive drug that is in marijuana. The legal limit for THC in hemp plants is 0.3 percent.

Johnson would not speculate whether Champlain Valley Dispensary officials intentionally duped him and knew the plants they provided him were high-grade marijuana and not hemp. He said he has been unable to get an explanation from the dispensary.

“I have no idea. I don't want to speculate, but it’s put me in a very tenuous position for sure,” Johnson said. “I didn’t know, but it still happened.”

Shayne Lynn, executive director of Champlain Valley Dispensary, released a one-sentence statement on Friday, saying the company was aware of the Vermont Agency of Agriculture, Food and Markets test results and had “fully cooperated with our state regulators.” He did not explain how and whether a mixup had occurred or whether the company had faced any enforcement action or sanctions. Lynn could not be reached by phone or email for additional comment.

Champlain Valley Dispensaries received the first medical marijuana license in the state in 2012 for a facility in Burlington and received a second license for a facility in Brattleboro the following year. It reports having thousands of patients and “we feel this is just the beginning,” according to its website. 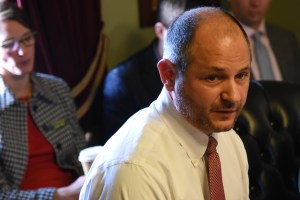 Lawmakers had been considering giving medical marijuana dispensaries the first opportunity to sell marijuana to the public if a tax and regulate system is approved, but have dropped those plans.

According to documents, the Vermont Agency of Agriculture tested remnants of two plants they found during an inspection that occurred in early October, two days after the agency received an anonymous tip that marijuana was growing on the site. The day before the unannounced inspection, Champlain Valley Dispensary workers harvested the 4-foot tall plants, according to Johnson. Inspectors found a 17-inch tall piece of a plant on a road at the farm during the inspection. Two samples were tested -- one had a THC level of 21%, another was 2.7%. A state report said the levels of CBD were not detectable in either sample. A cannabis “stump” was also found. 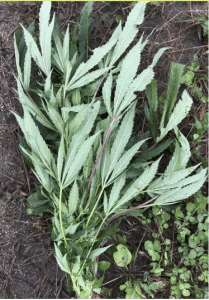 A portion of a marijuana plant found at Pete's Greens in Craftsbury by officials with the Agency of Agriculture.

According to Adam Silverman, a DPS spokesperson, the department received the agriculture agency results and “reviewed the matter” for compliance with the rules of the Vermont Marijuana Registry, but declined further comment Friday, including whether enforcement action was taken.

Johnson said in retrospect he appears naive, but said he didn’t have any reason to suspect the plants were not hemp, which look just like marijuana plants. He said the plants had been tested once or twice during the growing season and that he had been assured by CVD officials that there were no problems.

“I’m a neophyte and didn’t have any experience or any reason to be concerned,” Johnson said.

The effort was the first time he had grown hemp, Johnson said, and his longer-range goal had been to grow medicinal marijuana for Champlain Valley Dispensary after the trial run. He had a valid hemp license from the state.

Johnson said the seedlings were provided for free and that he received no money when CVD workers harvested the plants.

Thanks for reporting an error with the story, "Plants provided to Pete's Greens by dispensary were pot"

Swanton man gets 20 years in prison for 2020 fatal shooting