Three brothers have filed a lawsuit and another man has also brought a case against the Burlington Police Department alleging police brutality.

The lawsuits were filed in federal court Thursday, and the Burlington Police Department released the footage of the incidents Friday. One officer involved, Sgt. Jason Bellavance, was suspended without pay for an undisclosed period of time. The other officer, Joe Corrow, was not disciplined.

Del Pozo would not specify how long Bellavance’s suspension was, but said it was the second-longest he had given out during his time as chief. The officer is now back on duty.

The longest suspension del Pozo has issued is three weeks. In December 2018, two officers who drank beer they confiscated from minors were suspended for three weeks.

Charges related to the incidents have been dropped against the plaintiffs, all of whom are black, in the two cases.

Brothers Jeremie, Charlie and Albin Meli filed one of the cases, and Mabior Jok filed the other.

Attorney Evan Chadwick brought the case for the Meli brothers, while his firm’s partner, Robb Spensley, filed the Jok case.

Police responded to What Ale’s You around midnight on Sept. 9, 2018, after bar owner Sinan Eren called police. The lawsuit states that Jeremie Meli had a “verbal altercation” with unidentified males at the bar.

Bellavance’s body camera shows him arriving outside of What Ale’s You on Main Street. A bar staffer points him to Jeremie Meli, who is speaking with Eren.

Eren is pointing his hand into Jeremie Meli’s chest, and Meli says, “You guys started the fight.”

Bellavance then shoves Meli, who falls over and slams his head against the external wall of the building. The loud thump of Meli’s head hitting the side of the building can be heard in the video, and his eyes can be seen apparently rolling back in his head.

Albin Meli can then be heard saying, “Sir, he’s not responsive, are you fucking kidding me?” as his brother lies motionless on the ground.

Bellavance tells Albin Meli to “back the fuck up, now,” and Albin Meli is heard in the background saying, “That’s my brother! He didn’t do anything!”

As officers attempt to handcuff Jeremie Meli, who had regained consciousness, they tell him to stop resisting, and Bellavance explains to the other officers that he pushed Jeremie Meli and he hit his head.

Later, Albin Meli puts his hand on Officer Cory Campbell’s shoulder and asks, “I’m sorry to say this, but can you please tell them to stop?”

Bellavance tells medics that arrive on scene that Jeremie Meli had lost consciousness.

“He fell back, hit the back of his head against the wall, and then he was awake and fighting
heavily,” Bellavance says.

Campbell is currently on administrative duty as Vermont State Police investigate an incident in which Campbell punched a man, Douglas Kilburn, who had allegedly punched him first. Kilburn died days later and his death has been ruled a homicide.

All three brothers were charged in connection with the incident at the bar, but the cases were later dismissed. Jeremie Meli was charged with assault after a bartender at What Ale’s You said that Meli punched him in the face four times as he tried to escort him from the bar for being disorderly, Police Chief Brandon del Pozo said.

Charges were dropped after the bartender declined to cooperate with prosecutors as the case moved toward trial, del Pozo said.

In his lawsuit, Jok accuses officers of causing physical and mental damage and violating his rights, the evening of Sept. 8, 2018.

Body camera footage shows Corrow walking up to Jok outside of Manhattan’s on Main Street. Corrow later in the video says he saw Jok punch another man before approaching; the lawsuit states that a “conversation had become heated.”

Jok doesn’t see Corrow approaching until seconds before being tackled, when he turned to face Corrow. The officer’s tackle rendered him unconscious, the lawsuit stated.

A bystander asks, “Is he breathing?” and Corrow responds “Yeah, he’s fine” as Jok lies motionless on the ground.

“That’s messed up, you didn’t have to do that bro,” one other bystander says. “That was not necessary.”

“Is he out?” one officer responding to the scene shortly thereafter says. “He’s out,” Corrow replies. “He’s breathing.”

A puddle of blood is seen near Jok as exacerbated bystanders express dismay at the officer’s actions.

Jok then seems to regain consciousness and says, “You slammed me” to Corrow.

Jok is then loaded onto a stretcher and taken to the hospital.

Del Pozo said the charges against Jok — resisting arrest and disorderly conduct — were dropped because he is facing more serious charges in another case related to aggravated domestic assault.

Del Pozo said Corrow was using force to break up a fight and was not punished for his behavior. But the department advised officers to call for backup and use verbal warnings when breaking up future fights. 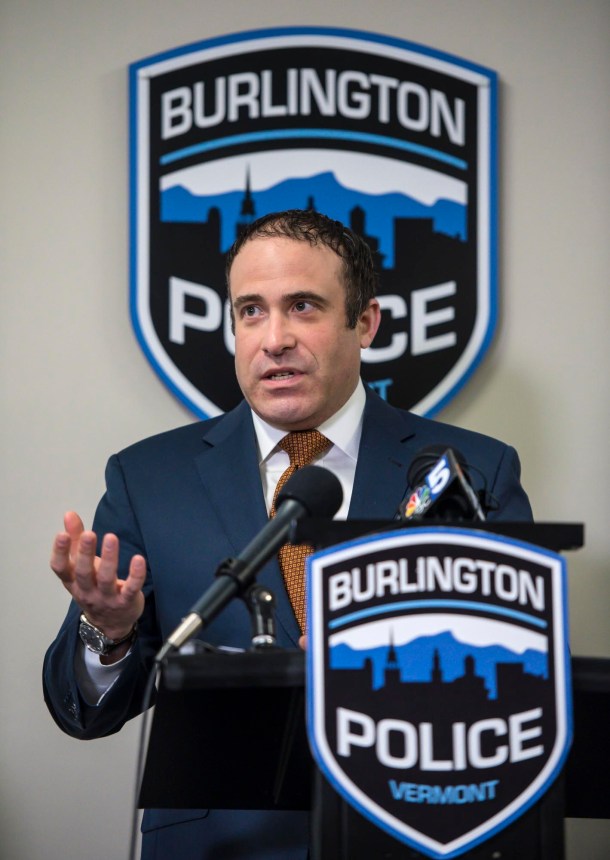 Burlington Police Chief Brandon del Pozo speaks during a press conference in Burlington on April 10, answering questions after the death of Douglas Kilburn was determined to be a homicide. Kilburn was found dead at home several days after being injured by Burlington Police Officer Cory Campbell during an altercation. Photo by Glenn Russell/VTDigger

Del Pozo held a press conference Friday to discuss the incidents, which were investigated internally by the Burlington Police Department and reviewed by the citizen police commission.

Shireen Hart, vice chair of the police commission, spoke at the press conference and said it was “deeply upsetting” to see anyone get injured at the hands of police.

“It is admittedly excruciating to watch the body camera footage due to the nature of the injures,” she said.

Hart said the commission spent a significant amount of time reviewing the incidents and providing feedback to the department, including appropriate discipline.

Bellavance’s use of force was found to be “either unnecessary or departed from training,” while Corrow was found to have “created an unnecessary risk by failing to radio in his location and ask for assistance before engaging the suspect.”

But Corrow was not suspended as he did not violate any specific directives.

Chittenden County State’s Attorney Sarah George reviewed the cases and determined that criminal charges against the officers were not justified, del Pozo said.

For example, the police chief said his officers didn’t use deadly force on a man who was wielding a meat cleaver he had allegedly used to kill his wife with or on Rashad Nashid as who was carrying a gun when he fled the scene in the direction of an officer after a shooting outside Nectar’s.

But del Pozo said in the Meli case, Bellavance’s use of force was unnecessary. He said Bellavance was put on notice for demotion or termination if anything resembling that type of conduct happened again.

Del Pozo said a majority of the department’s use of force happens downtown from 11 p.m. to 2:30 a.m., around when bars close.

“Officers at bar closing are facing a lot of bar fights, they are facing a lot of rapidly developing situations,” he said. “If our commitments are tested at any one time and place, it’s probably on the busy bar nights where there is a lot going on and officers have to act quickly.”

Del Pozo said it didn’t appear to him that racial bias played a role in the incidents, but he understood why people would have that concern.

All three of the Meli brothers were pursuing higher education this year, and Chadwick said they were planning to wait until the summer before filing the lawsuit.

The brothers were hoping the Burlington Police Department would reveal the incident on its own and take steps to address the concerns raised, Chadwick said. But after the death of Kilburn, Chadwick said the brothers decided telling their story could not wait.

“They said, ‘We need to get this story out now, we can’t sit on this any longer, people need to know,” Chadwick said. “It’s time for us to have this discussion.”

Correction, May 7, 2019, 1:08 a.m.: The original version of this story incorrectly attributed actions by Albin Meli to his brother Charlie Meli. The verbal and physical interactions with police in the video were with Albin Meli.

Thanks for reporting an error with the story, "Burlington officers named in lawsuit shown pushing, tackling in body ..."