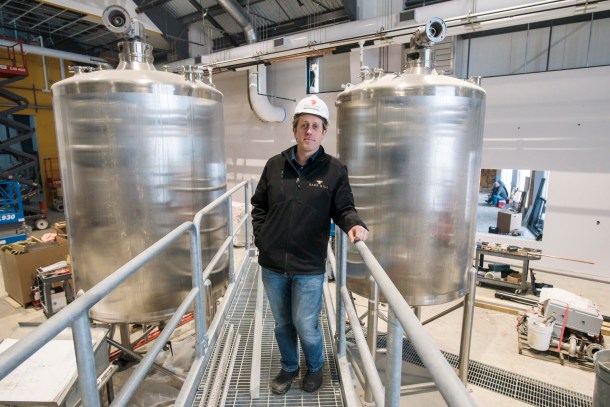 Ryan Christiansen of Caledonia Spirits at the company’s new production and retail facility under construction in Montpelier. Photo by Glenn Russell/VTDigger

[A] perfect day for Ryan Christiansen this summer would have tourists visiting Montpelier, finding their way to the bike path, and biking to Caledonia Spirits, the $10 million distillery Christiansen is opening in June.

There, they’d have a drink and maybe something to eat, buy a bottle of the company’s Barr Hill gin and Barr Hill vodka, and head out again, ready to spread the word about the product that is the center of the business.

Christiansen, 34, sees these tourists — and others who visit the distillery and restaurant — as a vital supplement to the company’s small national sales force. With store shelves dominated by billion-dollar liquor companies, the only way Barr Hill can compete is by sending its fans out to evangelize.

“It’s customers walking through the store saying, ‘Do you have Barr Hill? I want to buy it,’” Christiansen said.

The story of the 27,000-square-foot distillery — Montpelier’s largest new commercial building in decades — has been unfolding for years, since Christiansen started working with beekeeper Todd Hardie in Hardwick in 2011 to distill spirits from honey.

Over the years, the two scaled up, creating a brand that sold well regionally. Christiansen was drawn to Hardie’s passion for supporting bees and pollinators and educating people on the importance of raw honey.

“The whole idea was a new challenge for me,” said Christiansen, who earlier did two years of business training at Champlain College, worked in his parents’ popular hardware store in Plainfield, and had run a beer brewing business. “I’m kind of a lifetime student and want to be learning and be challenged, and this seemed like next step.”

In 2015, with a 300-gallon still at work in Hardwick, Hardie decided to return to his original farming, and Christiansen – with his business partner, Minty Conant – bought out Hardie’s share of the business. The two got help from friends and family and from Northern Community Investment Corp., a public/private lender, and from Community National Bank.

Then Christiansen and Conant started looking for somewhere in central Vermont to build a distillery that customers could visit.

“Stowe, Waterbury, it’s a fantastic place to be,” Christiansen said. “Commerce is already happening. But I think Waterbury is doing a great job with beer, and we don’t really want to be the gin company that is trying to tap into a vibrant beer market.” 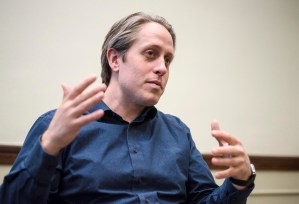 Christiansen also wanted a place where a lot of customers could visit.

“We’re in a three-tier system where we sell to a distributor who sells to the retail store who sells to the customer,” he said. “I never get to speak to people who like our products the best.”

Around the same time Christiansen was looking for a site, the Montpelier City Council was looking for ways to make the city more hospitable to development. The city hadn’t seen significant new construction for decades.

“Politically there had been a push for economic development,” said City Manager Bill Fraser. “There was a lot of demand; people wanted to do things here.”

The Montpelier City Council put out an economic development strategic plan in 2016 that prompted some developers to propose projects, including a hotel and then a public/private 348-space parking garage for which voters approved a $10.5 million bond last fall. The garage is now being appealed, which has stalled plans for the new downtown hotel.

Fraser credits zoning and other changes for the construction of a new Timber Homes headquarters just outside of town, and for construction of 18 units of housing on the second floor of a downtown building that had been vacant for 78 years. There’s also new affordable housing and a transit center going up downtown, and a new bicycle trail bridge and park being installed.

The City Council’s strategic plan specifically addressed ways to ease the path for projects like Caledonia Spirits. For Christiansen, that meant the city paying most of the cost of moving a 90-year-old water pipe that ran under the site he’d chosen, a former granite dump on the Winooski River. The water pipe was nearing replacement age; the city moved up the timeline for that work in order to help make the site available, said Fraser. In all, the city allocated around $465,000 for road, water line and sewer work, on the principle that tax revenues from the Caledonia Spirits building will eventually repay that amount. Caledonia Spirits is expected to pay $536,000 in municipal taxes and water and sewer revenues in that first 10 years. 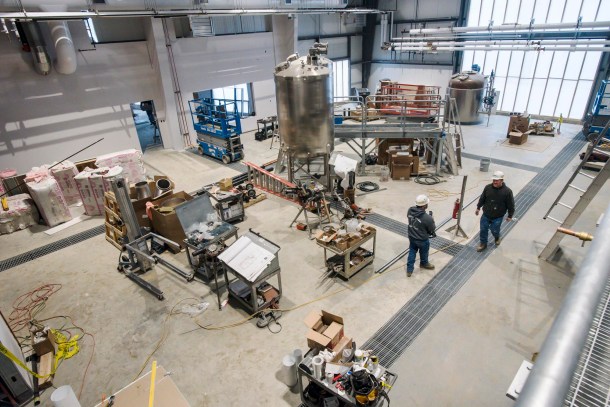 The new Caledonia Spirits production and retail facility under construction in Montpelier. Photo by Glenn Russell/VTDigger

“We fronted costs for public infrastructure that we’re going to get back from private investment,” Fraser said. He also sees less tangible awards to the city for that investment.

“Nothing was happening in Montpelier, and now a lot is happening,” he said. “They were a leader in that. It sent a message to a lot of people that the city is willing to work with you; that you can get stuff done in Montpelier.”

Some of the changes – like the transit center – were well in the works before Montpelier’s 2016 strategic plan, noted Betsy Bishop, CEO of the Vermont Chamber of Commerce. She said part of the reason for all the changes in Montpelier are state and federal policies and grants that promote downtown development all over Vermont.

“We’ve seen a policy across the state to inject new energy and economic development into our downtowns as economic hubs, through several administrations, over decades,” she said. “We’re starting to see the effect in various downtowns: Barre, St. Albans, Brattleboro, Bristol, Bennington.”

To pay for the new distillery and its two buildings, Christiansen and Conant borrowed money from Mascoma Savings Bank and also received assistance from Granite State Development Corp. of Portsmouth, New Hampshire, which helps small businesses in New England obtain Small Business Administration loans. They needed creative financing because the distillery building is highly specialized, making it a poor risk for lenders.

“From the bankers’ and appraisers’ point of view, what else would live there?” Christiansen said. “We are not going to get a finished appraisal even close to what we have borrowed to build the project.”

The city also supported the project by providing 10 years of tax stabilization – meaning the company will pay 50 percent of municipal taxes for a decade – and paying for a road over the railroad tracks, and it’s working on completing the bike path to the site.

“Montpelier carries kind of a stigma for being bad for business, but Montpelier has been great for us,” Christiansen said. “Without the support Montpelier put into the project, we would not be able to relocate to Montpelier.”

As May began, the property was still a construction site, but Christiansen expects to turn on the stills in early June. The company will have 47 employees on the site. 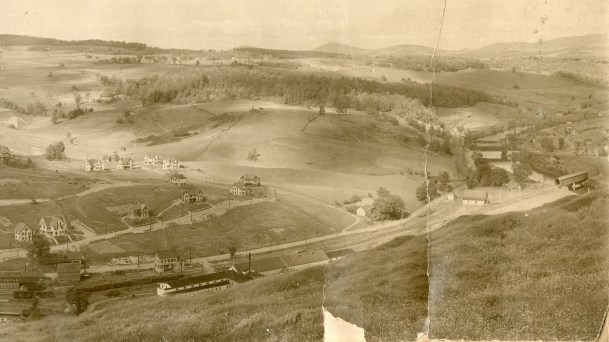 This photo from around 1900 shows where the Caledonia Spirits distillery is being built in Montpelier. Courtesy Vermont Historical Society

Caledonia Spirits will make 40,000 cases of spirits this year and bring in between $5 million and $6 million in annual revenues. Barr Hill spirits are sold around the country and internationally.

Christiansen sees the distillery as a visitors center that will extend the reach of the downtown. For now, he’s focused on selling his products, getting his building finished, and talking to lawmakers about changing a handful of laws to make it easier for distilleries to sell directly to consumers, something now limited by state tax policy. They are asking for the same rules applied to winemakers and brewers.

“This kind of home place that we’re building allows people to come in and understand the story so they can go to their home market and walk into Wegman’s in Worcester, Mass., and say, ‘You should carry Barr Hill,’” he said. “Otherwise we’d have to carry a 50-person sales team and we could never support that.”

Fraser thinks the bike path and distillery will spur renewal for the riverside area, now home to several vacant buildings.

“We’re hoping that will lead to those old granite sheds being developed, and creating excitement about that part of town for other taxpaying entities and jobs,” he said.

Thanks for reporting an error with the story, "Making it in Vermont: Montpelier hopes new distillery will signal a w..."