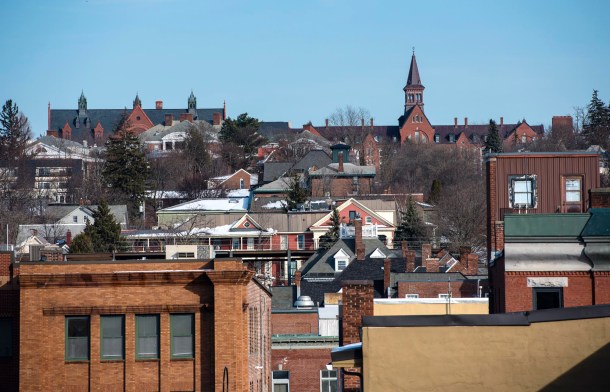 The University of Vermont’s Williams Hall, left, and Old Mill and downtown Burlington on Saturday, Feb. 19, 2019. Photo by Glenn Russell/VTDigger

[Y]oung professionals in the Burlington area say they want to stay in Vermont, but low pay and high costs are pushing them out.

The Lake Champlain Regional Chamber of Commerce and the Burlington Young Professionals group surveyed more than 500 young workers between Jan. 21 and Mar. 1 to come up with a report it released earlier this month. The age range for the survey was 21 to 45, with most of the participants between 22 and 34, said Erin Bombard, director of BYP.

The survey respondents reported an average annual individual income of $57,000 and an average monthly student loan payment of $424. Sixty-four percent of the respondents were female, 35% were male, and 1% were listed as “other.”

While many respondents emphasized that they enjoy living in Burlington and in Vermont, more than 40% overall said they intend to leave anyway within the next 10 years. They cited low pay and high housing costs.

“It’s been amazing and I want to put down roots here,” wrote one respondent in the open-ended section. “I would love to be able to stay here and raise children, but it would be a financial nightmare.”

Asked to rank the most important areas that need improvement in order to attract young workers, 45% of the survey respondents put “greater employment opportunities” in the top spot.

The report summarized that “those that felt the luckiest to have their current position were fearful that if they ever lost their job, needed more money or wanted to advance their career, they would have to look elsewhere — and likely out of state.”

Local and state lawmakers, nonprofits and private businesses are aware housing costs are harming the state’s economic growth and have been trying to tackle Vermont’s lack of affordable housing for the past several years.

“I don’t think focusing on driving housing costs down will be good for Vermont’s economy,” wrote one respondent. “The focus needs to be increasing the number of good paying jobs and getting companies to pay market value for employees (they are getting away with paying people too little because there is little competition in many industries).”

Lexi Wisnowski, a graduate student earning a master’s degree in school counseling, said she and fellow students due to graduate this fall are having trouble finding full-time jobs in their field. She thinks she’d have better luck in an area with a larger population.

“I’ve been applying and my fellow classmates have been applying too, and we’re all kind of having issues running up against school counselors in the area having a lot of experience,” said Wisnowski, 30. “They’re getting the jobs.”

Vermont’s extremely low unemployment rate — reported at 2.3% in March — is misleading, said Alex Farrell, 26, who works at the insurance company Union Mutual in Montpelier. Farrell, who ran for the Senate in Chittenden County last fall as a Republican, said the small overall size of the job market makes it difficult for young people to move around or change professions, something millennials, he said, are known for doing.

“If you’re in Vermont you’re not going to have the luxury of those in Boston who can move around every six to nine months until they find a job they really like,” he said. “In Vermont you’re going to be there for a while, unless your buddy has an opening at his company.”

Sixty-two percent of the survey respondents reported they had a bachelor’s degree. Asked to rank their job search methods, the respondents put company websites at number one. Close behind was “word of mouth,” and ranking third was “family and friends.” Employment professionals have said in recent years that social media and job boards have lost ground to the more traditional methods of searching and applying.

In their open-ended responses, survey respondents also had unfavorable things to say about traffic and road conditions.

“The public transit infrastructure is depressing,” one said.

The Scott administration has made attracting new workers a priority, citing research that shows Vermont is losing population. The U.S. Census reported in December that the fastest-growing states last year were Idaho and Nevada, which both increased by about 2.1% in 2018. Others at the top of the list were Utah, Arizona, Florida, and Washington.

Thanks for reporting an error with the story, "Survey: Job opportunities, housing market push young workers out of V..."