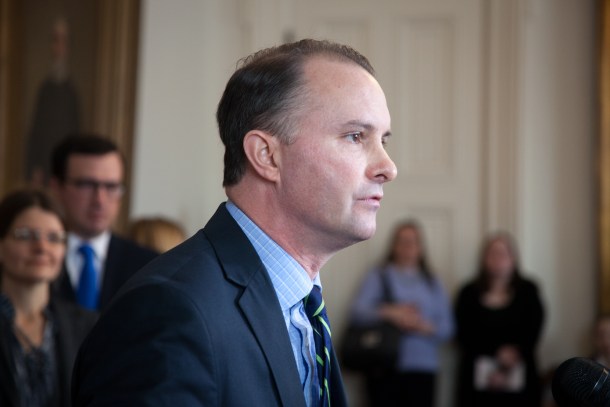 Attorney General TJ Donovan warned Burlington's police chief over his comments about an investigation into his own department. Photo by Mike Dougherty/VTDigger

[B]URLINGTON -- Attorney General T.J. Donovan called Burlington Mayor Miro Weinberger to express his concerns about Burlington Police Chief Brandon del Pozo’s public statements about the investigation of the death of a Burlington man days after a violent encounter with a city police officer.

Donovan spoke with Weinberger shortly after Vermont State Police announced that the state’s medical examiner had ruled the man’s death a homicide, after watching a press conference in which del Pozo addressed the situation, according to emails acquired by VTDigger and conversations with the officials involved.

Douglas Kilburn, 54, was found dead on March 14, days after an altercation with Officer Cory Campbell in the ambulance bay of the University of Vermont Medical Center. Police say Kilburn punched Campbell in the face during a March 11 confrontation, which lead Campbell to punch Kilburn before subduing him.

Kilburn was treated at UVM Medical Center and released the next day, but was found dead in his home later that week. Vermont State Police has since opened an investigation into the matter.

Donovan told VTDigger that he raised concerns to Weinberger about comments being made about the investigation, but declined to specify what those concerns were.

“As a general rule during a criminal investigation, it is best practice not to comment on the case or the state of the evidence, and I think that rule applies to all parties,” Donovan said.

Donovan will make the final decision on whether or not Campbell will be charged after the Vermont State Police conclude their investigation. The governor’s office also told Burlington officials in emails that the city’s behind-the-scenes efforts to push back on the medical examiner’s findings could be seen as attempted interference in the investigation.

Del Pozo said he held the press conference to ensure the department was remaining transparent and accountable to the people of Burlington.

“People in Burlington are very suspicious of silence, and it’s often hard to undo that suspicion,” he said. “A democracy owes an accounting of what it has done to the people, and we feel that need acutely.”

Del Pozo said he did his best to provide as much information as possible without doing a disservice to the investigation. For example, he said he felt it was important to provide context to the medical examiner’s finding and clarify that there were no weapons involved in the incident.

Donovan called Weinberger around 3 p.m., hours after the Vermont State Police publicly announced the homicide finding in a press release at 11 a.m. Del Pozo held a press conference at 2:30 p.m., in which he answered questions about the homicide ruling.

Weinberger sent an email to del Pozo just after 3 p.m. saying Donovan called him and asking del Pozo to call him when he could. 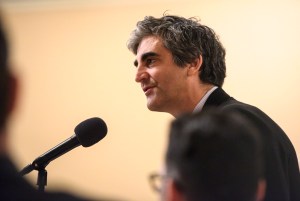 “I had some questions and concerns and articulated those to the mayor, had a productive conversation with the mayor,” he said. “There was a press conference, we were watching it, there were some questions, I called.”

Donovan said while he understood it was a very emotionally charged situation, it was important for all parties to let the investigation run its natural course.

“I took the conference call from T.J. as a forward-looking conversation, wanting to ensure we are on the same page going forward,” Weinberger said. “I think the chief worked hard in that press conference to be as responsive as he could while limiting to his remarks virtually exclusively to the content that had already been released in the state police investigation.”

Weinberger said he has tried to honor what he and Donovan agreed to on that call and believed he and del Pozo had been disciplined in what they have shared with the public about the case.

“I think we have confined our public comments to what was released in the state police’s investigation,” he said. “We’re going to continue to do that.”

Del Pozo said Weinberger told him Donovan was calling to ensure the city was careful on what it said publicly about the case.

“It was just a conversation to say, listen, we are conducting this investigation and we want to be sure it’s conducted fairly, so be careful about commenting about things like evidence,” Del Pozo said. 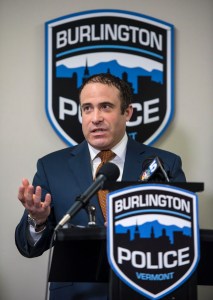 Burlington Police Chief Brandon del Pozo speaks during a press conference in Burlington on April 10, 2019, answering questions after the death of Douglas Kilburn was determined to be a homicide. Photo by Glenn Russell/VTDigger

If the state police hadn’t announced the results of the medical examiner’s findings in a statewide press release as the investigation was still ongoing, del Pozo said he would not have said anything. He even suggested that the impact of the press release, without any additional information, could have influenced the investigation.

“Was there a worry [by the state police] that those facts unaccompanied by anything else would harm the investigation?” del Pozo said.

Weinberger and del Pozo [had reached out] to Health Department Commissioner Mark Levine saying they believed the medical examiner’s finding was wrong and asking for an explanation “if the ruling of a manner of death is not to be amended.”

The mayor’s office also had reached out to Governor Phil Scott’s office in what Scott’s Chief of Staff, Jason Gibbs, believed to be an attempt to delay the release of the results.

Weinberger’s chief of staff, Jordan Redell, reached out to Gibbs before the state police released the homicide ruling. Gibbs told other state officials that Redell was “energetically reaching out trying to have us intervene to pause the release,” which Gibbs said “did not feel right.”

Gibbs responded to Redell around noon, writing that the mayor should work through the appropriate law enforcement and public health channels.

“I would also suggest the city be very careful not to do anything that could be misconstrued as interfering in, or trying to influence, the investigation,” Gibbs wrote to Redell. “I’m certain that’s not the intent, but the risk of misperception is something your team should consider.”

The city never replied to Gibbs, though the records show that Redell drafted a response and had sought input from del Pozo and Weinberger.

“We did consider responding to Gibbs’ email, but ultimately decided it didn’t make sense to get involved in a back-and-forth with the governor’s office, and moved on,” Weinberger said.

Del Pozo and Weinberger are set to address the situation at Monday’s City Council meeting. However, the conversation will likely be behind closed doors, as the agenda notes an executive session is expected.

Weinberger and del Pozo were confident they were doing the right thing, text messages between the two show on the night after the press conference.

“I think we were doing the right thing on a few levels, but in a different way than is normally done in Vermont, and so it causes a ripple,” del Pozo texted Weinberger.

Thanks for reporting an error with the story, "Attorney general warned Burlington's police chief after press confere..."