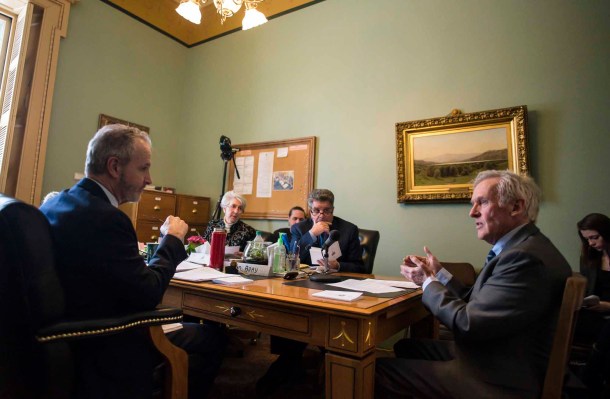 [T]he Senate Government Operations Committee unanimously approved a proposition Friday that would amend the Vermont Constitution to state that slavery and indentured servitude are “in any form, prohibited.”

Slavery was already illegal under the document, but the new language makes clear that it is prohibited regardless of a person’s age, not just for those over 21, and that indentured servitude is always illegal, with a person’s debts or consent having no bearing on the practice.

“We know that slavery happened,” said Sen. Jeanette White, D-Windham. “The Constitution expresses our ideals, not necessarily our behavior. We know that there are many things in here that we regularly misbehave about.”

The lawmakers heard testimony from many staunch advocates of the change, both at committee meetings and at a public hearing on the amendment.

“The thing that I hear from my friends of color is that it is so painful that this language has been there,” said Sasha Thayer, a resident of Plainfield. “My concern is that especially with what happened to Kiah Morris last year, not getting this done — and done right — is just so painful.”

Sally May, a pastor in Colchester, said her passion on the issue stemmed from listening to her black husband and black children speak about their experience of being people of color in Vermont and the racism they’ve been confronted with.

“What needs to be done by you who hold the power in 2019 is very clear, and frankly should be easy — dare I say simple: to denounce, to reject, to prohibit slavery and the verbiage in the Constitution so as to promote attitudes and actions that are positive,” May said.

Rep. Dick McCormack, D-Windsor, gave testimony in opposition to the change, saying it put a “smiley face” on history. Sen. Brian Collamore, R-Rutland, said he found McCormick’s testimony to be the most moving, though he ultimately voted in favor of the amendment.

Collamore was not the only one to change his mind on the issue. White said her gut reaction when the idea was first proposed was that the language should probably be left alone, but said she found herself very moved by the testimony she heard, especially from people of color, in favor of the change.

The committee considered an additional change later in the document, about the “qualifications of freemen and freewomen,” to instead read the “qualifications of voters” — but decided they had not heard enough testimony on the matter to make the change. The idea behind the alteration is that “freemen” has a historical connotation of “not slaves, with “freewomen” only added when the Constitution was amended to be gender-neutral. Sen. Alison Clarkson, D-Windsor, said they could always make the change in a separate amendment later this biennium.

Several committee members mused on how much more complicated the issue was than they expected it to be, especially with regard to semantics. Clarkson said at the end of the day, they clarified something which was not clear, and that was their goal.

“I think this is our most historic act of the year so far,” Clarkson said. “And we’ve done some pretty good bills so far this year. But I think this represents good work.”

In order for the Constitution to be amended, the proposition will need to pass the Senate and House once this biennium and again in the next biennium. If it passes, then it will go directly to voters.

Thanks for reporting an error with the story, "Constitutional amendment prohibiting slavery clears committee"