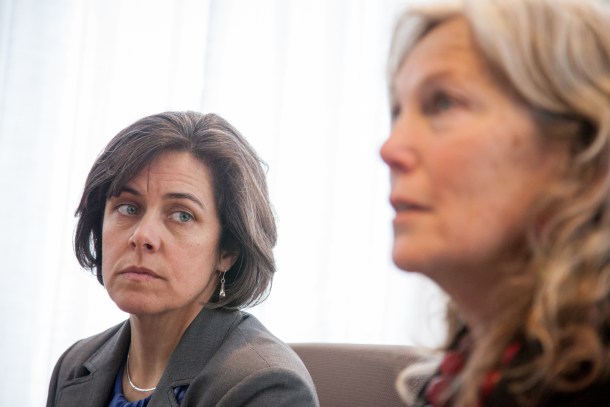 [L]awmakers opposing a bill that would protect abortion as a fundamental right under Vermont law, without qualification, are pushing a litany of amendments that would limit the legislation that is expected to advance in the Vermont House Wednesday.

The amendments include provisions that would only allow women to seek abortions until 24 weeks into pregnancy and another that would require minors to receive parental consent before receiving abortions.

But the Democrats and Progressives leading the legislative charge haven’t been interested in making the changes.

As of Wednesday afternoon, 10 amendments had been voted out of committees unfavorably. More were being drafted minutes before lawmakers took their seats in the House chamber.

Supporters of the abortion bill, H.57, which has overwhelming Democratic support, have said enshrining a woman’s right to abortion into state law is critical in the event the 1973 Supreme Court decision Roe v. Wade is overturned.

The bill is expected to receive preliminary approval Wednesday afternoon, but not before critics of the legislation challenge it on the House floor.

Critics of the abortion bill argue that the legislation's protections are too broad, and could allow women to have an abortion right up until the time of birth. While the law does not explicitly ban abortions in the third trimester, they are exceedingly rare nationwide and no physicians in Vermont perform the procedures.

Proponents say the legislation simply codifies what has been practice in Vermont for the past five decades. Amid federal uncertainty over abortion rights, they say, it’s imperative to protect a woman’s right to choose on the state level.

“We want to make sure that future women in Vermont have the same options and protections that women have had for the last 46 years here,” House Speaker Mitzi Johnson, D-South Hero, said Wednesday.

Amendments to the measure were discussed in the House Judiciary Committee and the House Committee on Human Services — both of which are chaired by lead sponsors of the abortion bill.

One amendment, proposed by Reps. Carl Rosenquist, R-St. Albans, and Robert Bancroft, R-Westford, would only allow abortions to be carried out until 24 weeks into pregnancy.

It would only make exceptions for women with medical complications who require abortions to avoid death or serious injury. Otherwise, however, the amendment would make the procedure a crime in Vermont after six months of pregnancy.

Rosenquist said his hope in this amendment was to find middle ground between advocates for and against abortion, and drafted the language so that it closely resembles the Roe v. Wade decision.

“I put this together as a compromise between the pro-life and the pro-choice people,” Rosenquist said during testimony given in committee.

But proponents of H.57 oppose the amendment because it would make abortion a crime. It was voted out of the House Judiciary Committee with 10 against and none in favor of the measure and in Human Services it was voted unfavorably 8-3.

Another proposal from Bancroft would require minors seeking abortions to obtain parental consent. That bill was also voted out of the judiciary committee with 10 against, and zero in favor.

Rep. Vicki Strong, R-Irasburg, introduced two amendments to the legislation. Strong was the only woman to have amendments read in committee before lawmakers took to the floor.

One would require pregnant women seeking an abortion receive an ultrasound 24 hours before the procedure, and the other amendment would require medical facilities that perform abortions to be inspected and regulated by the state.

“My intention is to make sure facilities are kept to a high standard of care,” Strong said. “I want to make sure women are protected.”

Both were voted out of committee unfavorably.

Debate in the House chamber is expected to continue into Wednesday evening, as lawmakers discuss the myriad amendments to the original legislation.

Chair of the House Committee on Human Services, Rep. Ann Pugh, D-South Burlington, said she expects more amendments to be introduced Thursday, when the bill moves to final reading.

Thanks for reporting an error with the story, "Abortion bill critics offer litany of amendments. Democrats aren't in..."

When a new family in Taftsville tried to reopen a country store, things went awry