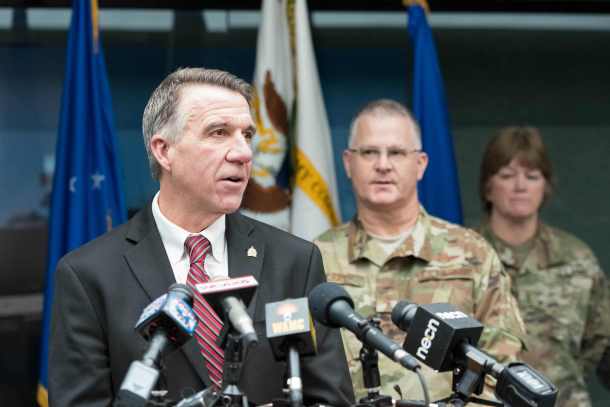 Gov. Phil Scott makes an opening statement at a press conference regarding the culture at the Vermont National Guard. Photo by Bob LoCicero/VTDigger

[G]ov. Phil Scott has requested that the Vermont’s next adjutant general conduct a top-to-bottom review of the Vermont National Guard’s policies and procedures.

The call comes in the wake of a seven-part series by VTDigger that outlined sexual misconduct and other improper behavior. The reporting found that Guard members with close ties to leadership often received lighter punishments while others were retaliated against for bringing serious issues to light.

Lawmakers will pick a new leader Thursday to replace Adjutant General Steven Cray, who decided not to seek another two-year term after serving as the Guard’s leader for six years. Vermont is the only state in the country where the Legislature elects the head of the state militia.

In December, Scott stood side-by-side with Cray at Camp Johnson to defend the Guard. He said the allegations in the VTDigger series were committed by “an occasional bad apple.” The governor said he believed Guard leadership hadn’t mishandled any investigations and had followed proper procedures.

“I’m convinced that all the procedures and protocols were adhered to,” Scott said. Those comments spurred frustration among lawmakers and some Guard members who felt Scott wasn’t taking the allegations seriously.

One month later, however, Scott quietly sent a three-page letter to lawmakers in which he not only repeated his calls for changes to how the adjutant general is selected but also requested Cray’s replacement conduct a full review of the organization’s policies and procedures.

In the letter, obtained by VTDigger, the governor calls for the new adjutant general to review all human resource policies and procedures and submit a report to the Legislature by May 1.

“Special attention should be given to the systems in place to prevent, report and respond to sexual harassment, assault, and professional misconduct or preferential treatment in the National Guard,” Scott wrote. “This review should begin immediately upon election and include an evaluation of the quality of healthcare and other physical, mental and emotional support services available to members of the Vermont National Guard.”

Furthermore, Scott called for a reexamination of specific cases where “there may have been bias, preferential treatment or unfair adjudication of any kind” and demanded actions to remediate any institutional deficiencies.

That could include a review for Lieutenant Colonel Jeffrey Rector, a Vermont National Guard whistleblower who says he faced retaliation and an other-than-honorable discharge after bringing organizational malfeasance to light. Last week, Rector requested Scott place a freeze on his case until the organization’s next leader is sworn in.

“All I am asking is for a fair and impartial review,” he wrote. 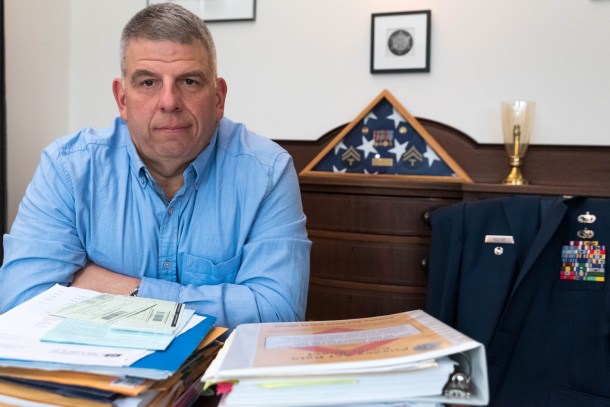 Jeff Rector sits at his dining room table at his house in Jericho with documents relating to his case. Behind are his uniform and his father’s honors as a World War II veteran. Photo Bob LoCicero/VTDigger

In a letter delivered to the governor’s office on Tuesday, Rector disagreed with Scott’s belief that the Guard had followed proper procedures. “I can provide evidence to the contrary, if you would only afford me the opportunity to meet with you,” he wrote.

In his response to Rector, Scott’s Chief of Staff, Jason Gibbs, pledged to look into whether the governor can place such a hold, but made no concrete promises. (He did not acknowledge Rector’s request for a meeting.)

“We do not want you to have unrealistic expectations,” Gibbs wrote, suggesting that federal law and military regulations govern much of the National Guard’s operations. “While we are making the necessary inquiries, the remaining administrative step in the ongoing military disciplinary proceeding is an area where the governor may have no authority to effect a change.”

Rector’s case has been in limbo since September 2017, when Major General Cray made the final determination to remove Rector from his civil service position. On January 16, 2018, a military discharge board recommended he receive a “General Under Honorable” discharge. The recommendation, while not as severe as an Other Than Honorable discharge, still places some of Rector’s benefits into question. More than a year after that hearing, Rector said Cray has yet to concur with this board’s decision in writing, which would send Rector’s case to the Secretary of the Air Force for further review.

In response to a press inquiry, Guard spokesman Lt. Mikel Arcovitch said he could not comment on the case unless Rector signed a release form giving the Guard permission to share to any of his “human resources and/or personnel and/or medical and/or family medical leave act files or records.”

Rector said signing such a form would open him up to selective disclosures from the Guard that could unfairly tarnish his case. “Due to the ongoing legal action and my hope that at some point in the future I will be able to put forth his case to the Merit Systems Protection Board, I cannot sign the consent document at this time,” Rector said in a statement.

VTDigger reported in December that Rector was forced out of the organization after bringing malfeasance to light, including a romantic rendezvous in Washington involving the Air Guard’s popular former Wing Commander, Col. (Ret.) Thomas Jackman. Rector said he was promised federal whistleblower protections by two officials — Brig. Gen. Joel Clark and now retired Col. Ellen Abbott, the former state judge advocate general. Due to Rector’s dual status as both a federal and state employee, however, he was denied federal whistleblower protections. (This loophole was closed in the 2017 National Defense Authorization Act; dual status technicians are now guaranteed whistleblower protections.)

Shortly after Rector brought Jackman’s behavior to light, Col. Michael “Torch” Ahmann asked now-retired Chief Master Sgt. Mark Parish to testify against Rector in exchange for a lighter sentence for his own alleged sexual misconduct. The deal allowed Parish to retire with full benefits, according to a notarized statement.

Parish’s statement lay the groundwork for an investigation into Rector that led to his dismissal.

Cray, who has been adjutant general since 2013 and oversaw Rector’s termination, has not acknowledged any missteps in the handling of the case. While Guard leaders are prevented from discussing personnel issues with the public, Lt. Arcovitch released a statement in December in which he said allegations that Rector was retaliated against were simply “false.” The top two candidates to replace Cray — Colonel Greg Knight and Retired Brigadier General David Baczewski — have pledged to re-examine Rector’s case if elected.

Rector previously approached Scott’s office for help with his case in February 2017. Jaye Pershing Johnson, Scott’s legal counsel, listened to Rector’s story at the time, and touched base with both Vermont Guard and Department of Defense officials to ensure that the proper processes were being followed in Rector’s case. Johnson said everything appeared above board at the time, adding that the governor’s office decided not to intervene because, “we felt that it was a personnel matter, and not appropriate.”

Rector says his efforts at vindication have been slow-walked by Guard leadership, and that various regulations may have been violated in the adjudication of his case.

Moreover, while the Guard has said it is ready to publicly discuss Rector’s case should he sign a disclosure form, leadership squelched Rector’s efforts to have a public hearing on his technician case in 2017. At one point, the Guard offered a settlement that included Rector signing a non-disclosure agreement and receiving a $10,000 settlement.

After Rector refused a settlement, he alleged Guard leaders raised various motions in order to escalate his legal bills.

Rector and his lawyer believe the Guard violated various rights enumerated in the Technician Personnel Regulations, which govern Rector’s position inside the Guard. Specifically, they argue that the Guard improperly blocked Rector from accessing exculpatory evidence, including his email account and the ability to interview witnesses, and improperly declined to give Rector a public discharge hearing.

In addition to fighting through Guard channels for vindication, Rector has also been working to get a hearing before the Merit Systems Protection Board (MSPB), a small federal agency that hears and adjudicates claims of retaliation by government employees. (The 2017 National Defense Authorization Act also granted dual status technicians like Rector access to this form of redress.) However the Trump administration has left key seats on the MSPB vacant, all but gutting the body’s ability to hear cases, according to the Washington Post.

Rector and his lawyer contend that Cray has taken the legal position that because Rector’s initial recommendation for dismissal came before the Defense Authorization Act, he has no right to an MSPB hearing. Other states, like Missouri, have interpreted the law more loosely in way that grants technicians the ability to appeal cases that were initiated before the law was ratified.

A dozen or so state lawmakers have consulted with Rector as they decide who to elect as adjutant general and how to reform Guard policies to be more equitable. The chair of the House committee with oversight of the Guard, Rep. Tom Stevens, D-Waterbury, has been especially interested in how the next adjutant general can impose new whistleblower protections.

While the governor’s office has taken the position that it will be hard for the state to intervene in Rector’s case, Rector said it has been the state case concerning his technician role that has caused him the most hardship, subjected him to inequitable treatment, and racked up all his legal bills. (In his federal military case, Rector was provided a lawyer for free.)

“This is an example of the quagmire I’m in,” Rector said. “The feds say it’s a state issue covered by state laws, the governor has the position it’s a federal issue, and we are left with the Guard making the rules and the decisions. There’s no oversight.”

Thanks for reporting an error with the story, "Scott requests full review of Guard policies"