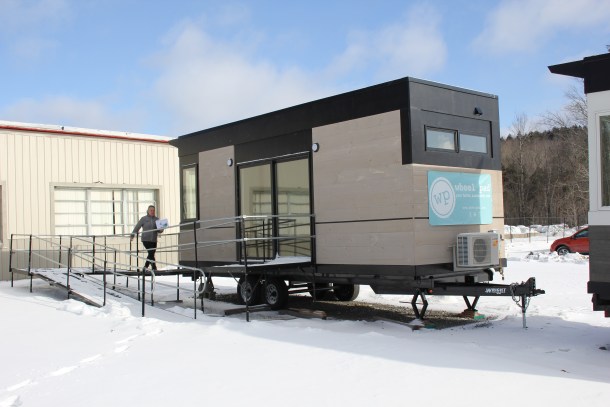 Julie Lineberger, the co-founder of Wheel Pad, with a Wheel Pad trailer near LineSync's offices in Wilmington. Photo by Anne Wallace Allen/VTDigger

Making it in Vermont is an ongoing series by VTDigger’s business reporter Anne Wallace Allen looking at companies and industries driving innovation in the state. If you have ideas about inspiring entrepreneurs or companies, send them to Anne at [email protected]

[F]or Jodee Burns, living with multiple sclerosis in her Anchorage apartment sometimes means waiting until her husband gets home before she can get up to use the bathroom.

Burns and her husband Scott Burns are hoping a Vermont company’s manufactured housing will bring her the freedom she needs to move around.

Scott and Jodee Burns found Wheel Pad, a new Wilmington company, online. They’re now working with Wheel Pad’s owners, Joseph Cincotta and Julie Lineberger, on plans for a house that is wheelchair-accessible and equipped with a ceiling-mounted lift that helps patients with mobility problems.

“Right now, I am stuck in a recliner,” said Jodee Burns. “I only have four hours of aide time (each day), so if I want to go to the bathroom or anything I have to wait until my husband gets home or the aide gets here.”

A Wheel Pad is a 200-square-foot house on wheels that can be annexed to a home as an accessory dwelling. The company sold its first one in February 2018 to a young man without the use of his legs in Beacon, N.Y. It has since delivered another one to a woman in Putney, and another, slightly larger 260-square-foot unit in Jericho. 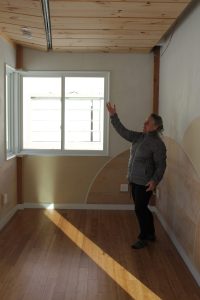 Julie Lineberger, the co-founder of Wheel Pad, shows where the lift will go inside a Wheel Pad trailer in Wilmington. Photo by Anne Wallace Allen/VTDigger

Cincotta designed the first Wheel Pad after the couple’s 26-year-old godson was injured in a swimming pool accident, Lineberger said. He was unable to find an accessible apartment near his work in Portland, Oregon, so Cincotta designed a unit he could attach to his mother’s house.

Until then, “he was completely isolated,” Lineberger said. The small square trailer contains a bedroom and bathroom. It was designed as a temporary addition.

“It’s about keeping families together so that they can roll in for dinner, or whatever, and come out to their own accessible space with bathroom,” she said. The addition also allows caregivers to help without disrupting the family.

Cincotta said he talked with several health care professionals while designing the units, which are made from non-toxic materials.

“The idea of a hoist came from talking with a person who actually takes care of people,” he said. “I talked with veterans at the VA about what their frustrations are, and this seemed like an unanswered need.”

All the outlet and light switches in the unit are designed for use by someone in a wheelchair, and the roll-in shower is sloped so that water doesn’t flood the floor. The connection with the home has been standardized for fast connection to the house.

“To make a home accessible for a loved one within five to seven days is really what makes it revolutionary,” Lineberger said. “And you don’t have to go through the planning and mess of construction in your home.”

She added that the addition can help veterans and others get out of care facilities they’re confined to because they can’t find a handicapped-accessible place to live.

“I have met people whose bedroom is the living room,” she said. “With a Wheel Pad, people have their space, their dignity and their privacy but they can still be with family.” 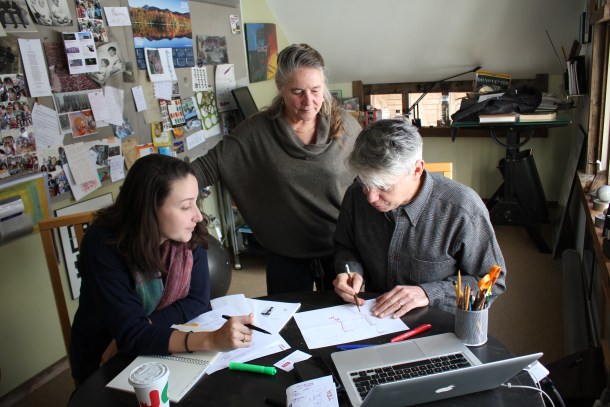 Cincotta made the unit as small as he could, within the strictures of the international building code, to cut back on the cost. It’s small enough to be towed by a heavy-duty pickup truck.

Lineberger does the marketing for the couple’s business, LineSync Architecture, which carries out residential and commercial projects in Vermont and elsewhere. The company recently designed the Carinthia base lodge, which opened this year at Mount Snow.

The first few Wheel Pad units were made with help from cadets at Norwich University who are learning about architecture and project management. Three others were made by Vermod Homes, a White River Junction company that builds very energy-efficient modular housing. The next five have been ordered from a company in North Adams, Massachusetts for a social service organization that plans to buy three or four at $60,000 each, Lineberger said.

The company’s goal is to sell 19 of the units in 2019. Lineberger would like to see Wilmington serve as the hub of Wheel Pad’s Northeast market. She said she hears the most interest from potential customers in the Northwest, and would like to create a Pacific Northwest manufacturing hub as well.

The units are on wheels because often zoning laws don’t apply to wheeled dwellings, Lineberger said. She had expected that they would be leased by people using them as temporary housing, but said so far all the units have been sold.

“I can’t wait until someone heals or whatever and we can take them back,” she said. “I get probably one call a week, ‘Do you have used ones that would be less expensive?’ So eventually we’ll have a secondary market.”

Meanwhile, Cincotta is designing an 800-square-foot conventional, not wheeled, handicapped-accessible home for Scott and Jodee Burns. Scott Burns said he hadn’t found a mobile home builder willing to ship an accessible home up to Alaska, and that having an architect custom-design a stick-built house for him there would cost too much. Scott Burns has rheumatoid arthritis.

He plans to find a builder in Anchorage for the home Cincotta designs.

“We’ve had so many requests for a stand-alone home,” Cincotta said. His goal is to design one small enough to be towed on the highway. “We get calls every week.” 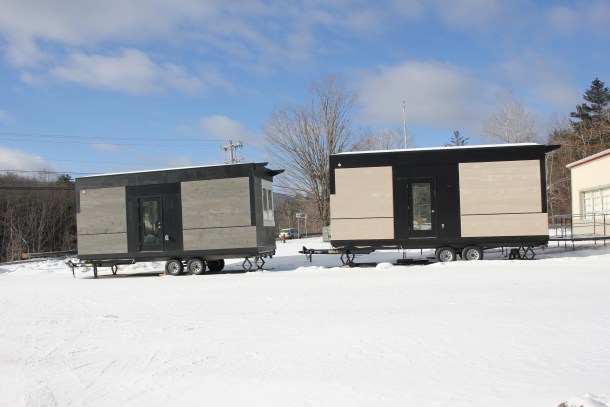 Thanks for reporting an error with the story, "Making it in Vermont: Wilmington company designs accessible tiny home..."