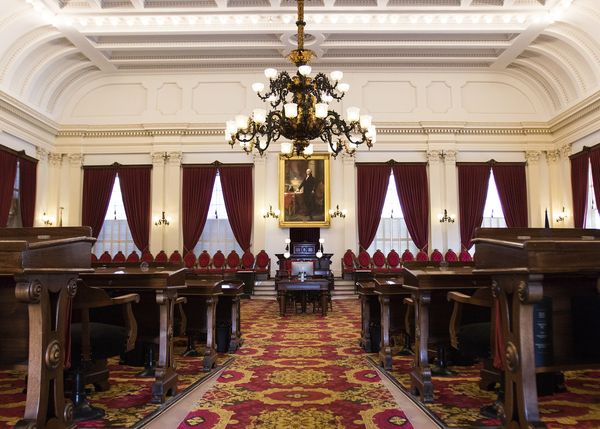 [M]ore freshman lawmakers than Vermont has seen in decades will be filing into the House of Representatives next month to begin their legislative careers.

Forty new members were elected to the House in November—a number which hasn’t been matched since 1992, according to a VTDigger analysis of data from the Vermont House clerk and secretary of state’s office.

Typically the number of new members at the beginning of a biennium is closer to 30, according to Bill MaGill, the clerk of the Vermont House of Representatives.

But House Speaker Mitzi Johnson said that she doesn’t think the boost of new members will have much of an impact on policymaking. Welcoming and training new legislators is something that happens at the beginning of every legislative biennium, she said.

“It’s a lot of new members and it’s more than last year, but it’s not absurdly more,” she said.

In 2017, at the beginning of the last legislative biennium, 31 new members were entering the Legislature.

However, Johnson noted that the going into the next session nearly half of all House members will be in either their first or second terms as legislators.

“That’s a little bit of a bigger deal in terms of management on the caucus end of things,” Johnson said, noting that a large portion of the chamber will have less institutional knowledge and policy experience than last session.

Johnson is also working to appoint leaders of House committees. Five House panels have vacant chairs that need to be filled before the beginning of the session.

There haven’t been so many vacant chairs at the outset of a legislative biennium since 2005, Johnson said. To address the turnover, House leaders set up specific trainings for the new panel leaders. House chair members will be finalized by the first week of the legislative session Johnson said.

Of the 40 new members, 30 are Democrats — two of whom previously served in the Legislature. Democrats’ gains in November secured the caucus a veto-proof supermajority in the House.

House Majority Leader Jill Krowinski, D-Burlington, said the particularly large class of new Democrats in the House were likely galvanized to run for office by discontent for President Donald Trump and politics in Washington, D.C.

“This is one way that they can stand up and they can take action and serve their communities and be able to take that energy that they have and work on policies that they care about that are very different than what’s going on in Washington,” Krowinski said.

The newly-elected House legislators include a crop of younger members. Krowinski said that during the last legislative session, she and outgoing Rep. Rachael Fields, D-Bennington, were tied as the youngest female lawmakers in the chamber: both are 38 years old. But soon, Krowinksi will no longer hold this distinction.

The last election has brought in six new members under the age of 25, including women like Felisha Leffler, an incoming Republican representative from Enosburg Falls.

Leffler and her 39 newly-elected colleagues attended a three-day orientation at the end of November, during which senior lawmakers and members of the Joint Fiscal Office and Legislative Council ran them through basic policy issues and legislative procedures.

“I think that there’s a lot that they prepare us for and that you prepare yourself for before you run for office, but nobody really knows what it’s like until they’re there,” Leffler said of the legislative session.

Leffler said that she hopes to find new sources of state revenue that don’t involve tax increases, and work on ways to bolster the state’s education initiatives surrounding the opioid addiction crisis.

Although she’s a Republican joining a chamber dominated by Democrats, she said she isn’t daunted by the party’s incoming supermajority.

“It just really emphasizes finding policies that are important and finding allies that are willing to help get it to the finish line,” she said.

Only nine of the newly-elected House members are Republicans. The incoming House minority leader, Patty McCoy, said the GOP’s priority in the House —to pressure lawmakers to exert fiscal responsibility — will not change, despite the party’s losses in November.

“I’m a fiscal conservative, as I’m sure most of the Republicans that serve are,” she said. “So within that context, that framework, we try to moderate what comes out and I don’t see that changing with the less numbers.”

Former House Speaker, Shap Smith, a Democrat, said that he doesn’t think it’s possible to predict whether a windfall of new, inexperienced legislators, will make it harder or easier to get things done.

But he believes the new members will be particularly quick to take up Democratic priorities including minimum wage, paid family leave, and legislation to protect the environment.

“My general impression is that you’re going to see a lot of action,” he said.

“I think we’re all going to come in at different points,” Kornheiser said of members’ varying levels of experience. “But we’re all coming in with the stories of our communities and that’s what we’re there to share and discuss with each other.”

Thanks for reporting an error with the story, "Influx of freshman lawmakers reshapes makeup of House"