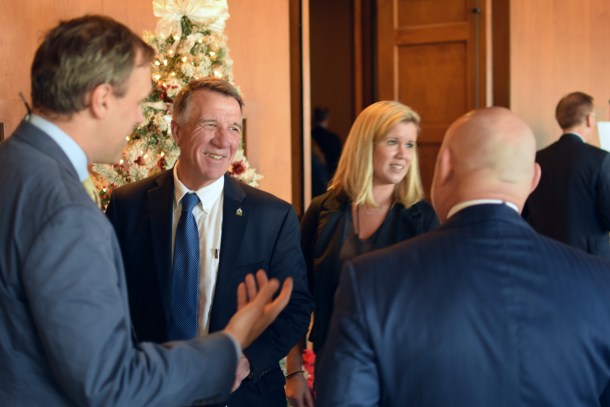 SCOTTSDALE, Ariz. — The world of Washington politics was 2,300 miles away at the 2018 Republican Governors Association conference this week in Scottsdale, Arizona, and that suited Gov. Phil Scott just fine.

The event served as an opportunity for victorious Republican governors to cleanse themselves of the mud they’d slung at Democratic opponents in the midterms, and for the RGA, which is more than happy to do the dirty work through PACs supporting the candidates, to do the same.

The animosity of campaign season, the developing Mueller investigation, a supposed border migrant crisis and the fact that the blue wave hit six Republican-held governor’s mansions all seemed like distant memories or far-away events.

The glitzy Fairmont Scottsdale Princess resort that played host to the conference was also home to the resort’s annual Christmas celebration — including workers setting up an artificial ice rink, employees in elf costumes, forests of electrified Christmas trees and unassuming families who came to take it in over mugs of hot chocolate.

The holiday cheer extended to the governors’ conference. It didn’t feel like the annual gathering of what critics have called the Republican Party’s “dark-money moving machine” — known backers include the Koch brothers, Blue Cross Blue Shield, AT&T, and Pfizer. Texas Gov. Greg Abbott, who led a keynote panel on the first day, lauded the success of the RGA, which he called the country’s eminent political organization.

In a video that played before one of the panels, a folksy voice proffered tax cuts, deregulation, welfare reforms, job training and manufacturing as pillars of conservative philosophy that have supported the country and its red-hot economy.

There were even undertones of unity and diversity — one clip showed outgoing New Mexico governor and former RGA chair Susana Martinez. “En America, todo es posible,” she said. In America, anything is possible.

The sentiments could have come straight out of a Phil Scott stump speech. In office and on the campaign trail, the governor has touted his work reining in government spending, holding the line on taxes and creating a more friendly investment environment in the state.

But he’s also aligned himself with Democrats on non-economic issues, signing a package of gun control bills, a transgender bathroom bill and partial marijuana legalization all in the past year. He said on Wednesday that he embraces refugees as a means to balance out an aging population and beef up the labor pool. So would the RGA, like some conservatives in his home state, hold it against him?

“I don’t feel as though (the RGA) stereotypes — maybe they do, but not that I’m aware of — because they understand that you’re representing your state, and that every state is different,” Scott said in an interview Wednesday. “They just want you to succeed.” 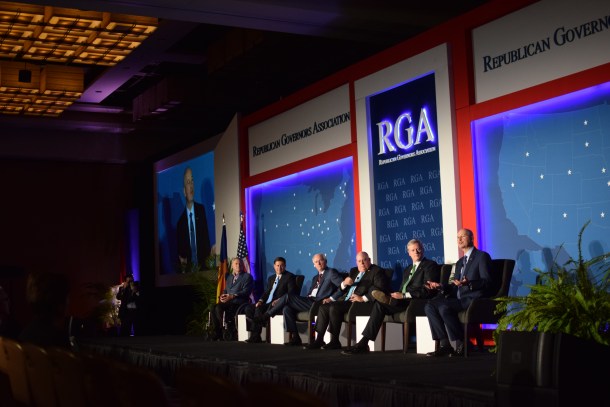 A panel discussion during day one of the Republican Governors Association conference in Scottsdale, Arizona, on Wednesday. Photo by Arren Kimbel-Sannit/VTDigger

Scott said that inflammatory rhetoric was at a minimum during the conference, and that even behind closed doors, governors only mentioned President Donald Trump in the context of endorsements.

“I think (the economy) is the right topic” for the conference, said former Vermont Gov. Jim Douglas, also a Republican. “Most Americans are principally concerned with how their families are faring. I think many voters look to leaders at the state level for more specific leadership on those issues than in Washington.”

That’s especially true for Scott and other GOP governors who lead states where the president and his policies are widely despised. The organization indirectly spent $826,000 in the midterms to support Scott and attack Democratic challenger Christine Hallquist, a political newcomer, for what they said was her willingness to raise taxes.

The association also spent about $8 million on fellow moderate Gov. Charlie Baker of Massachusetts and another $4 million or so on Gov. Larry Hogan in Maryland. In all three cases, most of the money went to sophisticated media campaigns boosting the candidates’ messaging or dirtying their opponents.

But partisan rancor was not on the conference agenda. The association gave plenty of speaking time this week to Hogan and Baker, who not only touched on growing economies in their state but also made passing calls for civility — an approach Scott said the party needs more of.

“We need to have a conversation — no fight, no battle – all of us are good at recognizing that success … is a team sport,” Baker said during his speech.

Scott has done some coalition building among this centrist group “in terms of pushing back against Trump (and) Washington.” He said he’s worked with several other governors who have kept the president at arm’s length, including Baker, Hogan, Arizona Gov. Doug Ducey, New Hampshire Gov. Chris Sununu, Ohio Gov. John Kasich and Nevada Gov. Brian Sandoval.

“I believe that there are going to be more opportunities and that we’ll find more newly elects who share the same thoughts … to show that there are moderates (in the party),” he said.

But it’s unlikely that the influence of that mindset will spread far beyond Scott’s circle, said Eric Davis, a professor emeritus of political science at Middlebury College.

“I think Trump is the dominant figure in the Republican Party and it doesn’t matter what (the RGA says),” Davis said.

And though Scott said he wasn’t at RGA to drum up fundraising for a re-election in 2020, he will have to confront that reality if he decides to go for a third term — when he’d most likely be running with Trump at the top of the ticket. And he and the other incumbent governors may not have the benefit of an upward economic trajectory in the years ahead.

“Again, I think the economy is the right topic, but though it’s good now, it goes in cycles,” Douglas said. “This has been a long uptick and there will come a day in the not-too-distant future where the economy will soften.”

In the governor’s mind, though, now is the ideal time for governors to take on some of the big issues facing Vermont and rural areas across the country — declining populations, stagnant job growth, increasing cost of living and even the Trump factor.

“A common theme here,” Scott said, “is that there is so much dysfunction in D.C. that there’s an opportunity for others to lead.” Thanks for reporting an error with the story, "Scott and fellow GOP governors trade campaign rancor for holiday chee..."