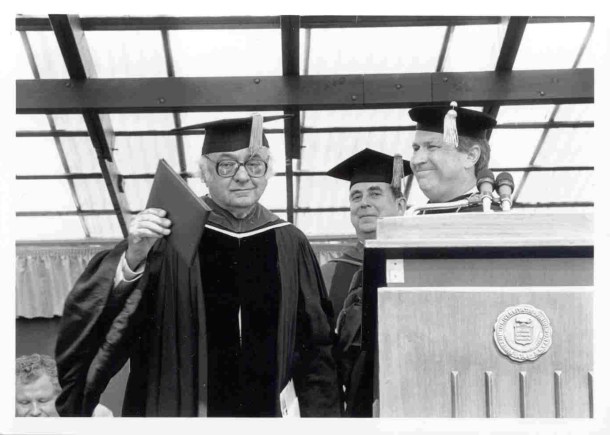 Alex Novikoff holds up an honorary degree given to him by the University of Vermont in 1983, 30 years after the school fired him. Photo courtesy of UVM Special Collections, Bailey-Howe Library

His days at the University of Vermont were numbered: Professor Alex Novikoff knew that much. He had worked hard to get there and was now, in 1953, a highly respected cancer researcher. But the school’s board of trustees had given him an ultimatum: either name former colleagues who had communist sympathies, or pack his things. Talk or walk. Novikoff knew what his answer had to be.

In 1935, while a graduate student at Columbia University and an instructor at Brooklyn College, Novikoff had joined the Communist Party. Like many leftists of the day, he was drawn by idealism to the movement. He had supported many progressive causes on campus, including fighting for faculty members’ right to form a union. Disillusioned with the Soviet Union, and fearful of what involvement with the party might do to his career, Novikoff had eventually ended his involvement with Communism.

Now, years later, with Sen. Joseph McCarthy leading the Cold War effort to ferret out “Reds” in America, Novikoff’s past began to take on a more sinister air. He wasn’t helped much by the fact he had been born in Russia and had been brought his parents as an infant when they emigrated to the United States. In 1953, the U.S. Senate’s Internal Security Subcommittee subpoenaed Novikoff to testify. Searching for communists, the committee wanted to know the names of colleagues he had associated with during his graduate school years.

Novikoff was no stranger to anti-communist inquests, having been a subject in intelligence and security investigations as early as 1938. He presumably wanted to spare former colleagues similar aggravation. So when he testified before the Senate twice in 1953, Novikoff said he would speak freely of his days since joining the UVM faculty in 1948 and taking the school’s required loyalty oath. “I am not a Communist,” he told the committee, which was chaired by Sen. William Jenner of Indiana. But when senators asked questions relating to events before that date, Novikoff declined to answer, exercising his Fifth Amendment right to remain silent.

His testimony before the committee made the newspapers in Vermont. The Burlington Free Press ran a story under the tabloid-ish headline: “UVM Professor Balks At Jenner Red Quiz.”

The only Vermont newspaper to take Novikoff’s side seems to have been the weekly Swanton Courier, whose editor Bernard O’Shea wrote: “Senator Jenner has no right to inquire into your beliefs or ours; into anyone’s politics.” 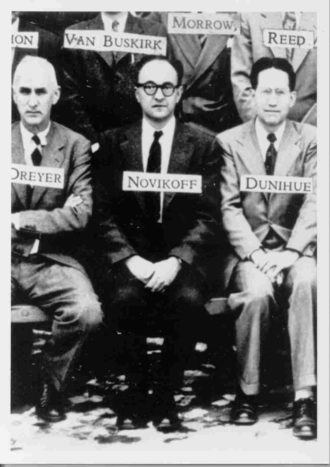 UVM President Carl Borgmann came under intense pressure to review Novikoff’s employment, including from Gov. Lee Emerson, who by virtue of his office was an ex-officio member of the university’s board of trustees. UVM had granted Novikoff tenure – a lifetime appointment that is supposed to encourage academic freedom – but the school’s administration claimed the right to revoke it.

Borgmann appointed a six-member committee to review Novikoff’s actions and make a recommendation. A joint faculty-trustee committee, chaired by the Rev. Robert Joyce, a UVM graduate and future bishop of the Roman Catholic Diocese of Burlington, found that the professor was no longer a communist, had never actually been a “real” one, and noted that he had taken the school’s loyalty oath and registered for the military draft. The committee voted 5-1 to retain Novikoff.

The decision didn’t sit well with Emerson, or apparently with many of the other trustees. At their next meeting, they reviewed the committee’s report. Emerson was there that day in June, the first board meeting he had ever attended, and made a motion that Novikoff be suspended without pay until the professor agreed to answer all of the Senate committee’s questions. The trustees proved much less understanding than the Joyce committee, approving Emerson’s motion by a vote of 11-5. They gave Novikoff until July 15 to agree to speak.

The Burlington Daily News was ecstatic about the decisions. In an editorial headlined “Congratulations UVM,” the Daily News’ arch-conservative publisher William Loeb wrote: “This forthright and American type of action is in contrast to the disgusting vacillations and chicken-heartedness of the administration of Harvard University which allowed various members of its faculty to remain at Harvard after they had refused to answer reasonable questions propounded to them by various Congressional committees.”

“… Congress and the public have a right to know whether he (Novikoff) is attempting to influence those (students’) minds in favor of the Communist conspiracy to destroy this nation.”

Novikoff received hate mail, including at least one death threat. One person wrote him, “You have no ‘constitutional liberty’ in trying to undermine a nation that allows rats like you to really amount to something. … If you do not get out – you may rest assured your light will go out one of these days and you will be one good Communist—not a live one—you bastard!”

Others were more sympathetic. A group of 18 Burlington clergy members wrote an open letter to the trustees, urging them to retain Novikoff. The letter also called on trustees to reveal that they had reversed the decision of the Joyce committee, whose recommendation had been kept secret.

Novikoff knew there was little hope. He said years later that he never considered changing his mind, and he must have doubted that trustees would change theirs. So he did what any sensible person would do: He dusted off his resume. On June 29, he wrote a letter to one of the world’s most famous men, seeking help. At the time, a new medical school was being formed in New York City that would bear the name of Albert Einstein.

Novikoff told the famed scientist that he was writing to him “because of your deep concern over anti-intellectual activities of Congressional investigating committees.” He had reason to believe Einstein would be sympathetic. Just two weeks earlier, Einstein had criticized these types of investigations for instilling “suspicion of all intellectual efforts into the public by dangling before their eyes a danger from without.” McCarthy had responded by labeling Einstein an “enemy of America.” Novikoff asked Einstein to put in a good word for him at UVM.

The professor’s other supporters pushed for a public hearing for Novikoff, as required under UVM’s bylaws. The trustees quickly relented, arranging a meeting of a board of review, which would also include faculty members.

Novikoff would have one last chance, but not much of one. The university’s lawyer set the tone of the hearing in his rambling accusation against the professor. “He is being discharged because, having knowledge, particular knowledge, knowledge not available to the ordinary Communist, even of activities inimical to the security of this country, nevertheless refuses in an investigation of the subversive influence in the educational process to give to a Congressional Committee the benefit of his knowledge.”

The professor’s lawyer responded in exasperation that “Dr. Novikoff is charged with the Fifth Amendment.”

The argument went nowhere, and the board of review voted 14-8 to recommend that Novikoff be fired.

At their meeting a week later, the trustees made it official, voting almost unanimously to remove Novikoff. The sole dissenter was Rev. Joyce. Years later, Joyce blamed the decision on misguided patriotism. “(Gov. Emerson) waved the flag, as was the custom at that time,” he recalled. “These people in public life went along pretty much with the sentiment of the time.”

Novikoff packed his things and left Vermont. Two years later, he landed a job at the Albert Einstein Medical School, continued his distinguished work as a cancer researcher and was eventually named to the prestigious American Academy of Sciences.

In 1983, three decades after dismissing him, UVM did its best to make amends, honoring Novikoff for his work and presenting him an honorary degree at the graduation ceremony that year.

Novikoff had already moved past the incident. Several years before receiving the honor from UVM, Novikoff had told a reporter: “What I’m asked most of all is do I feel any bitterness, and I don’t. I feel that I gained more than I lost. I learned about the understanding and courage of the people who supported me.”

Thanks for reporting an error with the story, "Then Again: UVM’s very own victim of McCarthyism"