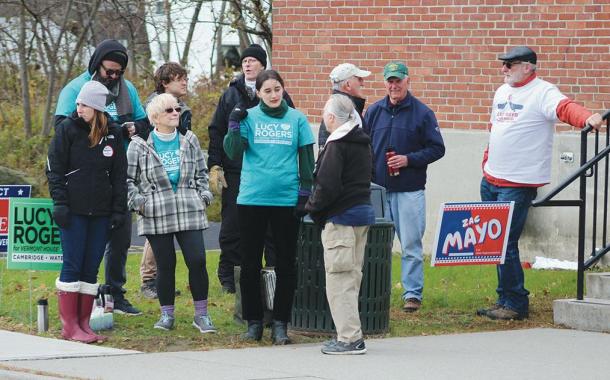 The campaign between Lucy Rogers and Zac Mayo for an open seat in the Vermont House of Representatives in Lamoille County made national headlines when the two played a duet following a debate at a local library. CBS News even called it a “landslide victory for civility.”

But the race was also ultimately a landslide win for Rogers, a Democrat, who won nearly 60 percent of the vote share on Tuesday in the one-seat district representing Cambridge and Waterville.

“I focused my campaign entirely on going door-to-door and speaking with people face-to-face,” she said. “It was special to be able to run a campaign in a way that felt true to the community.”

State Sen. Richard Westman, a Republican from Cambridge who represented the area for nearly three decades in the House, also credited Rogers for tirelessly campaigning in person.

“Many doors in the district – she knocked on twice,” he said. (Westman’s included.) But he also said the district was flooded with mailings from left-leaning groups who supported Rogers.

The district was one of 12 that flipped from red to blue on Tuesday, handing Democrats and Progressives a combined veto-proof supermajority in the House. The seat was held by Republican Rep. Bernie Juskiewicz since 2013.

Eric Davis, a professor emeritus of political science at Middlebury College, said that Rogers was almost certainly helped by the wider political climate, which, in reaction to President Donald Trump, saw a record number of voters cast their ballots in a midterm year. In open seat, a lot of voters looked at party identifications and voted accordingly, Davis said.

“I think it was a big Democratic wave and it swept a lot of new members into the House,” he said.

Just 23, Rogers will be among the youngest sitting members of the Legislature (the youngest appears to be Patrick Seymour, 21, a Republican from Caledonia County.)

But she said the issues she cares about – namely, rural education and health care – are far more important than her age. Still, she thinks there’s value in having a Legislature that looks a little bit more like the citizenry at large.

“I’m excited to bring a female perspective as well. My town, Waterville, has never had a female representative,” she said.

The University of Vermont graduate hopes to be appointed to either the health or the education committee. She’s concerned about how strictly Act 46, the school district consolidation law, is being implemented, as well as equity between low-income students and their more affluent peers, especially in the context of school choice. And she also wants to see the Legislature do more to address health care access in rural areas.

As for the duet, and the national attention it got, Rogers said she was grateful Mayo was the one running against her.

“I think we were both really lucky to be running against each other. It’s one thing to want to run a civil campaign but you need an opponent who is also on board,” she said.

She also added that civility is “not an end in and of itself.” It’s something that can happen when there’s already common ground – like “believing in science” and “believing in human rights.”

“For me civility is something that arises out of having two candidates who value humanity,” Rogers said.

Thanks for reporting an error with the story, "Famed for campaign duet, Lamoille House seat is one of 12 Democratic ..."