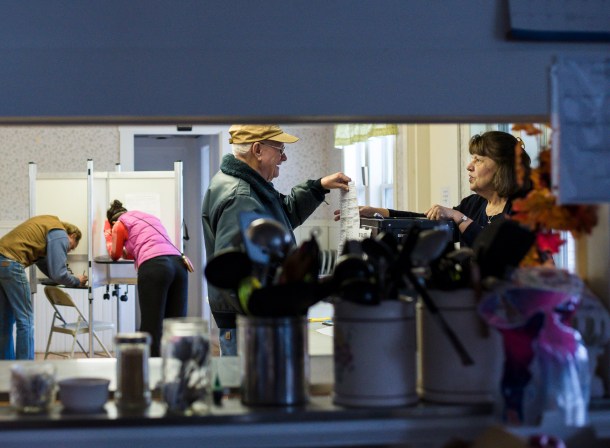 Ballot Clerk Sandra Bador, right, helps a voter with his ballot in Worcester on Election Day, Tuesday. Bador said that this is the 30th year she has volunteered at the polls. Photo by Glenn Russell/VTDigger

[S]tate Labor Council AFL-CIO President Jill Charboneau supports her members’ calls for lower taxes and a higher minimum wage. But ask what newly elected Vermont lawmakers should do first and she points to another pocketbook priority.

“I want them to work on universal access to primary care,” the Middlebury resident said after voting Tuesday. “That’s the most important economic thing we can do that would benefit all.”

She’s not alone in her thinking. Election Day interviews with Vermont voters from Burlington to Brattleboro unearthed a variety of concerns ranging from education to the environment. But the one issue mentioned by more people than anything else: The economic cost of living.

“The taxes in Vermont are so high, they’re pushing seniors out,” the 69-year-old said.

Randolph resident Andrew Terry, for his part, wants leaders to start with the high price of medical coverage.

“It’s crazy when you talk about trying to save money by cutting taxes, but our health care system is the most expensive in the world,” the 49-year-old said.

A majority of Vermonters who cast ballots Tuesday said they were motivated by how President Donald Trump was polarizing the nation’s politics.

That said, a surprisingly large number couldn’t specify anything when asked about state concerns.

“I’ve been so focused on the federal government,” Corse said, “I don’t know what’s going on in Vermont.”

“None of the other issues are going to matter if we don’t have a livable Earth,” Werner said.

Even so, the collective costs of living topped the list of state concerns. A VTDigger survey of voters in more than a dozen cities and towns mirrored an AP VoteCast poll of 700 Vermonters who ranked health care (at 27 percent) and the economy (at 19 percent) as the issues most on their minds. 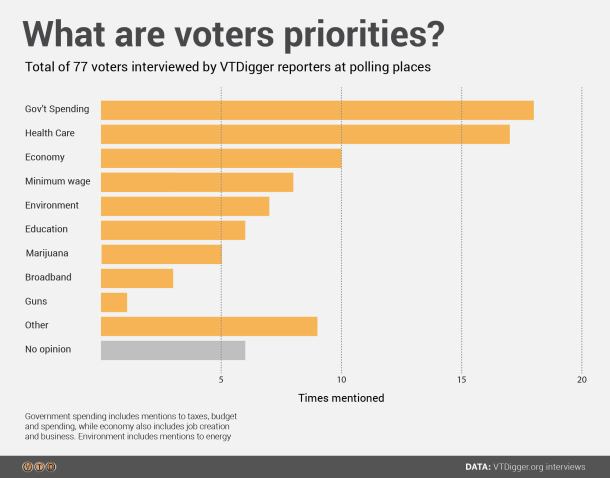 While most people calling for lower government spending and taxes spoke in general terms, many seeking changes in health care elaborated with personal stories.

Rutland resident Ronald Fairbanks said the insulin he required to treat his diabetes had spiked from $50 to $600 for a three-month supply, all while the 72-year-old retiree’s Social Security remained stagnant.

“Drug costs are skyrocketing,” he said. “I was only taking half my medicine for a while because I couldn’t afford all of it.”

Randolph farmer Brent Beidler, for his part, said paying for medical coverage could be challenging for peers who work for themselves.

“It’s not easy to get affordable health care if you’re a self-employed entrepreneur,” he said.

But what state government can or will do in response has yet to be determined. Republican Gov. Phil Scott has spent the past two years promising to veto legislation that raises taxes. But Tuesday’s election gave Democrats enough members to override him in both the House and Senate.

As for health care, the Legislature drafted a bill this past session calling for the creation of a publicly financed primary care system with no patient cost-sharing, only to see the proposal stall in committee.

Lawmakers did approve a mandate that Vermonters purchase health insurance as of 2020, although officials still have to figure out how to enforce the rule.

As vice chair of the House Health Care Committee, Rep. Anne Donahue, R-Northfield, said while she understood public concerns, Vermont couldn’t easily solve its health care problems single-handedly. Rather than set up a universal system, she suggested “laser targeting” help for people uninsured or underinsured and pressuring current providers to work on their own fixes.

“I don’t think we can do a bigger, splashier transformation,” Donahue said. “We’re too small a state.”

The newly elected Democratic U.S. House of Representatives has pledged to stop further efforts to roll back the federal Affordable Care Act or overhaul Medicaid and Medicare, but what else they might do to tackle health care costs is unclear in the immediate wake of the election.

Back in Middlebury, Charboneau said whether at the state or federal level, all the talk about the soaring cost of medical care needed to turn into action.

“It’s been percolating,” she said, “and now we should be doing something about it.”

Thanks for reporting an error with the story, "Cost of living tops Vermont voters’ concerns"