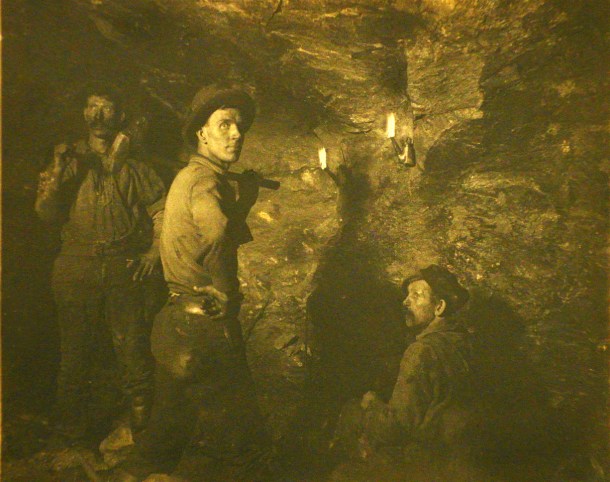 Laborers work underground at the Ely Copper Mines in Vershire in this undated photograph. Photo courtesy of the Vermont Historical Society

[A]mmunition was handed out to the troops: 20 rounds per man. The state militia planned to bring order to the town of Vershire.

Before dawn on the morning of Saturday, July 7, 1883, roughly 200 militia members climbed into wagons that would transport them to the outskirts of town. A group of striking miners had controlled Vershire since Monday. Word had spread that the miners had seized explosives and were threatening to start blowing things up if their demands weren’t met. One rumor had it that the miners were holding company executives, town officials and others hostage.

Their complaint was simple: they weren’t getting paid. Miners hadn’t seen a paycheck in months. Company officials claimed the mine was nearly bankrupt, but workers believed, or in desperation at least hoped, they were lying.

That the Vermont Copper Mining Co. would cry poor would have seemed impossible just a few years earlier when the copper business was booming. The price of copper was high and Vermont mines were yielding 60 percent of U.S. production.

The Vershire mine opened in 1854. By the mid-1860s, in the midst of the Civil War, the price of copper had risen sharply, but so too had wages. Money was tight at the mine, but the company president convinced board members to pay investors a series of five lavish dividends that the company could ill afford.

At this point, Smith Ely, heir to a New Jersey leather manufacturing company and an original shareholder, took action. The 64-year-old Ely won a heated election to become company president. He would eventually own as much as 90 percent of the mine. The battle Ely waged foreshadowed the internal struggles that lay ahead.

Ely poured his fortune into the mine and was reward during the 1870s, when production and prices, and therefore profits, soared. The company expanded its smelting plant, which soon stretched to 700 feet in length and contained 24 furnaces. Sections of the mine were extended to a depth of 1,000 feet. 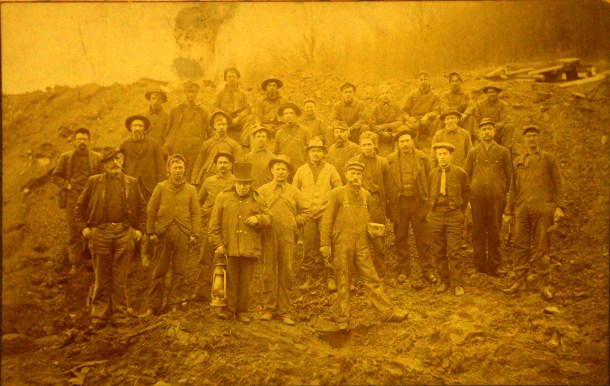 Workers at the Ely Copper Mines in Vershire pose in this undated photograph. Photo courtesy of the Vermont Historical Society

The workforce, made up of many recent arrivals from England and Ireland, as well as native-born Vermonters, swelled to nearly 700. The town’s population reached 1,875 in 1880, more than half living in company housing. Churches and schoolhouses sprang up, along with a post office, general store, barbershop, meeting hall, and even a women’s hat shop.

Smith Ely, now in his late 70s, wanted a successor. In 1876, he brought in his grandson, the awkwardly named Ely Ely-Goddard. Ely-Goddard’s actions and appearance did nothing to win him friends among the hard-laboring miners. Among the dozens of common workers’ houses and the massive smelter at the center of town, he chose to build a large, elegant mansion, which he named Elysium.

Ely-Goddard sported a wide mustache waxed to pointed perfection, and favored fancy parties, ornate uniforms (he had gotten himself appointed colonel in the state militia) and handsome horses and coaches. He was also, it was whispered and later alleged in court, involved with a married woman.

What qualified Ely-Goddard to run a copper mine was unclear. But he was willing to do almost anything to gain his grandfather’s favor. He was even willing to change his name. Born Ely Goddard, he apparently decided that having his grandfather’s surname as his first name wasn’t enough, so he also appended it with a hyphen to his last.

Ely-Goddard went a step further in 1879, after he had managed to get himself elected to the Legislature. He successfully orchestrated a petition, asking the Legislature to change the town’s name to Ely.

It was a measure of the failing fortunes of the mine, and the Ely family, that townspeople successfully petitioned to have the name changed back to Vershire in 1882. The company was in a downward spiral. The mine was producing less copper, which due to falling prices netted diminished returns. Unable to meet payroll, mine operators started firing workers. Fewer workers on the job meant that less copper was mined, and so on.

Mine executives decided to invest $50,000 (the equivalent of more than $1 million today) in new hoisting equipment in the belief that richer ore could be found at greater depths. The company fell $200,000 in debt. Ely-Goddard, who was now running operations, searched for a partner to invigorate the operation. He found Francis Michael Frederick Cazin, a German mining engineer.

For all Cazin’s experience — he had worked at Western and Midwestern mines — he was a disastrous choice. His personality was as caustic as the mine’s tailings. He badgered and berated people to get his way. Cazin argued that the mine, which may already have been doomed, needed massive investment, including new blast furnaces and pneumatic drills. The company issued new stock, which raised money that Cazin put into improvements. Cazin’s enemies, whose number seemed to grow daily, claimed he was losing money. He argued that, on the contrary, he was making it.

Ely-Goddard soon tired of his partner and fired him. But he wasn’t rid of Cazin, who charged that Ely-Goddard had committed fraud. Ely-Goddard sued Cazin for libel and the German was briefly jailed. It wasn’t exactly a good working relationship.

A series of photographs, which were digitally stitched together, show the Ely copper mining operation and worker housing in the town of Vershire as it appeared circa 1880. Photo courtesy of the Vermont Historical Society

Given the financial and personal turmoil surrounding the company, it is plausible that the company couldn’t make payroll in July 1883. But the miners, who saw the luxury of Ely-Goddard’s lifestyle, found the claim hard to swallow.

The labor strife, since dubbed the “Ely War,” erupted in July 1883 after the company posted a notice that the mine would close unless the laborers took a pay cut. Company officials said they could only pay the laborers’ back wages if furnace workers agreed to smelt the supply of copper ore on hand.

The roughly 300 workers still employed at the mine demanded their back wages be paid immediately. Some threatened to ransack the town, even dynamite company property, if they weren’t paid. Sunday night, company officials spirited away important papers for safekeeping.

Monday, the workers took action. When the company store opened that morning, 150 men, women and children stormed in and emptied the place. Since they hadn’t been paid, workers and their families had run low on essentials. Then a mob descended on Ely-Goddard’s mansion. He wasn’t home, but his assistant, Charley McCarthy, persuaded the crowd to leave the house unharmed.

Next, the mob marched on nearby West Fairlee, where the elderly Smith Ely was staying. Ely’s friend, Civil War Gen. Stephen Thomas, met them at the door, pistol in hand. The crowd backed off, but soon returned. This time, McCarthy, who had since arrived on the scene, persuaded the miners to form a committee and meet with Ely, who was sick in bed.

One newspaper reported that Ely said he understood the miners’ plight. “This mine belongs to the working man,” he was quoted as saying. He pinned the blame for their troubles on Cazin. “I own the house in which Cazin lives and you may take and unroof it as far as I am concerned.”

The company treasurer telegraphed executives, informing them of the situation. The sheriff and a posse traveled to Vershire, but retreated under a torrent of jeers. Company lawyer, and former governor, Roswell Farnham wrote to Gov. John Barstow, requesting the militia be called out.

As militia members prepared to enter the town, many feared that bloodshed was inevitable. At about 7 a.m., troops crested a hill and looked down into the heart of Vershire. They saw no one. As they walked into the apparently sleepy town, they noticed people peeking from windows. Soon men, women and children began to wander out of their homes to meet them. The miners offered no resistance. Twelve men identified as the leaders were arrested and taken off to jail in Chelsea. (They would be released two days later by the state’s attorney.)

Seeing that the crazed mob they had been called upon to contain was actually a group of hungry miners and their families, the militia members took pity. They began passing out their rations to the crowd. Several hours later, with the town peaceful, the militia departed without firing a shot.

Like the miners themselves, the Ely mine was on its last legs. Company officials succumbed to the inevitable five years later and declared bankruptcy. The miners never did receive their back wages.

Thanks for reporting an error with the story, "Then Again: The rise and fall of the Ely Copper Mines"