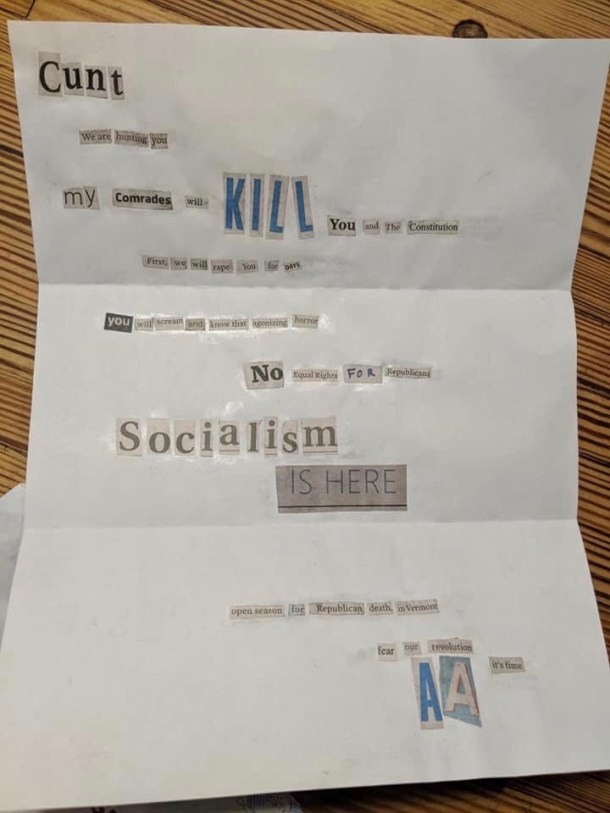 [V]ermont State Police are investigating a threatening letter to a Republican candidate for the Vermont House of Representatives.

Colchester House candidate Deserae Morin, who is running for office for the first time, received an anonymous letter in the mail to her home address on Friday.

A photo of the letter sent out with the statement shows a message constructed out of cut-out letters fixed to a piece of paper.

“We are hunting you. My comrades will kill you and the Constitution,” it states.

The letter threatens her with sexual violence. “You will scream and know that agonizing horror,” it reads.

“No equal rights for Republicans. Socialism is here. Open season for Republican death in Vermont. Fear our revolution,” the letter says. It appears to be signed “AA.”

Morin first opened the letter when she was drinking her Saturday morning coffee.

“Really I just wanted to throw it in the trash and forget about it,” she said in an interview Sunday evening. “But I couldn’t, because it wasn’t just talking about me. It was talking about all Republicans and all Vermont Republicans.”

Some of the letter was pieced together from clippings from campaign material Morin has handed out in her community.

“I knew on some level I’ve made contact with this person. They’re somewhere in the vicinity, geographically speaking. And that’s unsettling,” she said.

Morin shared a photograph of the letter on social media. At first, she said, the response from the local community was supportive. But the post has gained steam, and increasingly garnered negative attention.

Morin, who works at UPS, decided to run for office on a platform of smaller government. She wants to reduce health care costs and create a healthy business environment in Vermont.

“I knew it was going to be hard, and I knew there was going to be pushback, especially being Republican in Vermont,” she said. “I just never expected something this extreme.”

She does not know who may be behind the letter, though she said she has found that there's a "small minority" of people who "get absolutely livid” with her when she is campaigning.

“It’s because I’m a young woman who is Republican, that’s the thing that sets them off,” she said. “It really sets me back. They act like I have personally hurt them just by choosing to be Republican.”

Jace Laquerre, a Colchester resident who said he has been consulting with Morin on her campaign, sent out a press release about the letter. Laquerre was a Vermont delegate to the national GOP convention in 2016, as a 17-year-old student at Colchester High School. 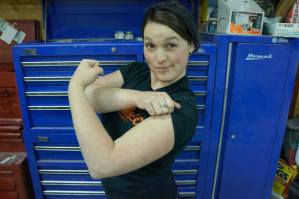 “I think it’s a reflection of the state of politics in America,” Laquerre said Sunday. “It’s turned ugly and divisive and partisan and personal.”

According to Laquerre, someone claimed responsibility for the letter in a post on Facebook, but it was not clear how credible the claim was. Morin passed that information on to police, he said.

The Vermont State Police announced Saturday that they were investigating the threat against Morin. They asked anyone with information about the letter to contact the Williston barracks, at (802) 878-7111.

Morin said her family has taken security measures. She has two young daughters.

Jack Moulton, executive director of the Vermont Republican Party, said the party is “thankful” that police are investigating the threat made against Morin.

Moulton said the party is not aware of similar threats made against other GOP candidates.

Speaking before an audience of hundreds at a campaign event at a Williston farm Sunday afternoon, Lt. Governor David Zukerman, a progressive Democrat, condemned the letter.

"It doesn't matter whether it's extreme right, or extreme left, that is not who we are in Vermont," he said.

"We cannot take the energy that's coming out of our president in Washington and allow it taint our water, our spirit and our souls,” Zuckerman said. “We are better than that."

Christopher Di Mezzo, communications director for the Vermont Democratic Party, said in an email the party has faith law enforcement will adequately investigate and prosecute individuals responsible for the threat.

“Threats of political violence fly in the face of our shared values as Vermonters and have no place in our public discourse,” he said.

Di Mezzo said the threat is “not tolerable,” and likened it to the threats against former Bennington Rep. Kiah Morris, a Democrat. Morris resigned her seat last month, in part citing racially motivated harassment and threats.

“I don’t want to see this happening to anybody,” Morin said. “People need to understand how to disagree with someone without threatening and intimidating them.”

Thanks for reporting an error with the story, "UPDATED: Police investigate threatening letter to Colchester House ca..."

Vermont experts offer guidance for bringing birds, not bears, to the feeder

For Vermonters with disabilities, the search for housing is even harder

Haviland Smith: Will there be political violence in America’s future?

Jim Andrews: The myth of perpetual growth ignores that our planet is finite

Emerson Wheeler: We are failing the many people struggling with long Covid

Where do historic Election Day losses leave the Vermont GOP?