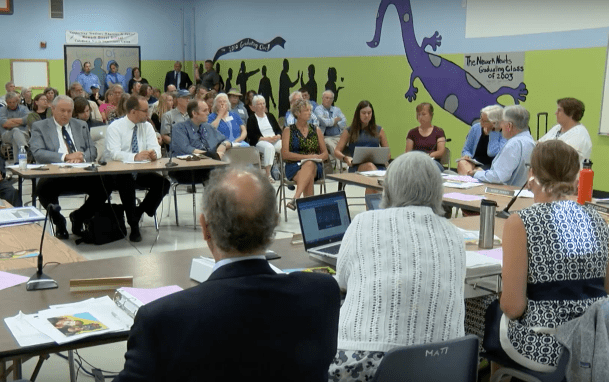 Members of the State Board listen to local school officials and resident who turned out for an Act 46 meeting in Newark in July.

[T]o block forced mergers under Act 46, some districts are threatening to close their schools. But now the Vermont Agency of Education says that strategy won't fly.

Because the state can’t compel two districts with different operating structures to consolidate, certain communities had hoped that tuitioning out certain grades could block a merger with their neighbors. But those districts had planned to actually postpone closing their doors until, at the earliest, next fall.

Now, in a memo compiled last week, Vermont Agency of Education officials argue that unless districts actually shutter their schools before the State Board of Education issues their plan under Act 46 – which could come as soon as next month – that scheme to forestall mergers won’t work.

“A vote taken so precipitously to close a school could just as precipitously be taken to overturn the closure decision as soon as the possibility of a State Board-required merger had passed,” the memo states. “There is no authority for the Board to base its order on inchoate intentions or possibly ephemeral actions.”

The law is in the last phase of its implementation, and the state must decide what to do with the roughly 90 districts that haven’t voluntarily merged. The state board, which has the final say on consolidations under the law, has until Nov. 30 to release its plan. But the body is expected to release its decisions earlier.

The agency has already made its recommendations to the state board about which districts should be merged against their will. Many of those communities are now mulling different strategies for blocking such consolidations, including closing a school and tuitioning out their kids, or closing and later reopening as a private school.

Proponents of the strategy argue that consolidated, regional boards would close small schools anyway. Better to close now, they say, and at least keep their school boards.

“I’m a little bit in disbelief right now because until I saw your email, I hadn’t seen this,” said North Country Supervisory Union Superintendent John Castle on Monday. Holland, which is in the NCSU, has a vote scheduled for Tuesday on whether to close their elementary school next fall and tuition their students out to Derby.

Castle said the new directive from the agency was a surprise – prior conversations with state officials had given him “no indication that we could not move forward with this process,” he said.

“As far as I know the vote will go forward, and the question will be whether it means anything,” he said.

In Franklin, the school board has warned a vote for Oct. 2, in response to a citizen petition, to close the Franklin Central School beginning in the fall of 2020. Franklin school board Chairman Robert Berger said the board was already planning to ask its legal counsel about how solid the plan was ahead of an informational meeting on Sept. 25.

“The beautiful thing about the law and legal opinions is that there’s usually different sides to that and they usually get settled in court,” Berger said.

The state board is on a listening tour to get feedback from local communities facing the possibility of imposed mergers. Their next, and final such meeting is scheduled for Sept. 19 in Chester.

Thanks for reporting an error with the story, "Education agency says school closures won’t block mergers"