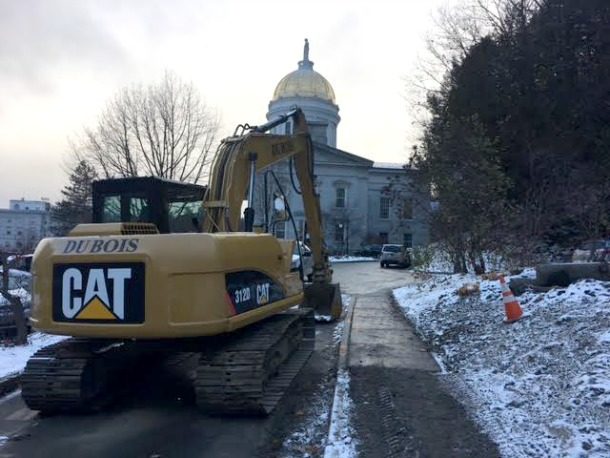 A piece of DuBois Construction equipment sat outside the Statehouse in Montpelier in 2016. VTDigger photo

The construction company Gov. Phil Scott sold his share of after taking office — and which still owes him $2.5 million — has undergone more ownership changes, including the addition of a close friend of Scott’s, and taken on more debt.

The governor said he believed the company was strong enough to absorb any additional debt and did not feel the money he is owed was at any increased risk.

“It’s been profitable, it’s got a good foundation,” Scott said Thursday. He added “they’re working real hard and seem to be, from the outside looking in, appear to be growing.”

Wayne Lamberton, DuBois vice president and a close friend of Scott’s, said Sunday the company was financially strong and had grown in the more than 18 months since Scott left.

Lamberton said he and Jeff Newton — the company’s president who became a partner when Scott left last year — picked up Don DuBois’ share this year. Lamberton would not discuss financial details or investments but said he held a minority position and Newton owned the majority share.

Lamberton downplayed any concern about his friendship with Scott and said his involvement with DuBois “was no different than any other business transaction” he’d done over decades.

“I’ve bought and sold businesses for the last 35 years,” said Lamberton, a developer who owns Maplewood Ltd., which operates a mega convenience store in Berlin that is promoted by the state in a controversial public-private partnership struck during the Shumlin administration.

Under political pressure because the company does contract work for the state, Scott reluctantly sold his half of DuBois Construction back to the company for $2.5 million at the beginning of last year. Scott self-financed the deal and agreed to be paid over 15 years. Under the terms, Scott is paid interest only for the first five years, he said, at a rate of 3 percent. Last year, he earned $75,000. After the first five years, Scott said he will receive principal and interest.

Taking out a loan to pay him the full $2.5 million would have required the company to liquidate or put its bonding capacity in jeopardy, Scott said.

The governor had been a part owner for 30 years with Don DuBois. Scott first started working for the Middlesex-based construction company when he was in high school.

Critics said Scott self-financing the deal gave him a continued stake in the company’s success and did not remove the conflict of interest. Scott said the sale divorced him from day-to-day operations and that the state had an open, transparent bidding process. A state website shows DuBois won a two-year contact in 2017 on site and earthwork with the state Department of Buildings and General Services. The contract is worth a reported $250,000.

DuBois had contracts worth $3.7 million while Scott, then a part-owner in the company, served as a state senator and then lieutenant governor.

Last week, the Vermont Public Interest Research Group filed a request with the new State Ethics Commission to issue an opinion on whether Scott’s deal violates ethics rules, according to Paul Burns, VPIRG executive director. The ethics commission has no enforcement powers. The commission recently released a set of guidelines requiring state officials and employees to avoid actions that create a “potential or actual” conflict of interest.

“I have literally no idea what they’re doing. I just see the trucks and equipment around and I got enough to do without getting involved with anything else,” said the first-term Republican governor, who is running for re-election this November against Democrat Christine Hallquist.

In an interview, the governor said he was not familiar with the terms of Don DuBois’ deal with the company. The governor said he trusted his cousin would not strike a deal more lucrative than Scott did. (Scott said he determined his half share was worth $2.5 million last year based on an assessment of the company he did himself.)

“Knowing all the players, I know it wasn’t, they wouldn’t have done it for more than that. They just wouldn’t have. It wouldn’t have happened. And knowing Donny, my cousin, like I do, it being his namesake, he wants the thing to survive as well. I know it was a fair deal, I’m sure it’s on sound footing. It’s a bit of a leap of faith with anything you do,” Scott said. “It’s no different for me now than it was then” before DuBois sold back his share.

“I think it’s fine with what’s happening and I’m comfortable with it,” the governor said.

Newton said the company’s financial health is “better than it has ever been and the future looks to be as good, or even better.”

“I would not be a good businessman if I took on debt I could not pay,” Newton said.

Don DuBois could not be reached. He is now listed on the company website as an “underground utilities manager.” 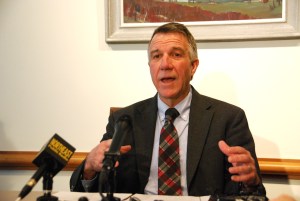 Gov. Phil Scott speaks about the sale of his stake in  DuBois Construction in 2017. File photo by Elizabeth Hewitt/VTDigger

When Scott sold his half back to the company, Don DuBois became the sole owner, according to Scott. Newton was hired as general manager for DuBois Construction and became an owner with Don DuBois when Newton put an unspecified amount of money into the company “six or eight months or so after I sold,” Scott said.

Scott insisted he has no plans to return to the business after he leaves office.

“Things change. Jeff runs the business different. Everyone has their own style and he’s younger. It’s hard to believe, but I just turned 60 this year, so I’m not looking exactly for a new adventure. I can’t imagine going through what I went through for three decades and having to do that again,” Scott said.

The governor said he hadn’t spoken with Don DuBois in eight or nine months.

Referring to Lamberton, the governor said Newton “leans on him a lot for advice.”

Scott insisted his own ties with DuBois are completely severed. (The governor rents a storage site for his motorcycles and other vehicles from DuBois for $250 a month.)

“My relationship is just receiving my check from DuBois every month,” Scott said. He also maintained he doesn’t care if he gets paid back completely, even though his interest in the business comprised the bulk of his net worth.

“I went into that business with nothing and I know people don’t believe it, but if something happens, it still gave me a good living and I’m fine. It’s just the way it is in business and I’ll be fine,” Scott said.

DuBois was founded in 1946 by three brothers. Scott said after the death of his father, his mother married one of the DuBois brothers. The brothers ran the business for about 40 years. Scott worked for DuBois during summers in high school and college. After the brothers retired, Scott bought half of the business along with Don DuBois, the son of one of the original owners.

Thanks for reporting an error with the story, "Scott’s former company undergoes more ownership changes"

Corrections department to fund 15 agencies for ‘scattered’ and congregate housing

Sex case against ex-NY cop pending over 30 years set for trial, though not until next year

Becca Balint: Understanding the crock pot and the conflict entrepreneur

Tim Kane: Seeing through the smoke of abortion rights alarmism

Bob Stannard: Why all those parents hated Ruby Bridges