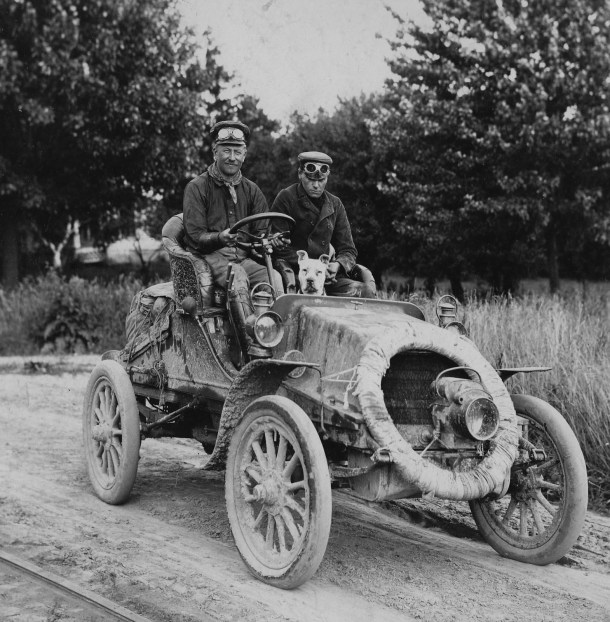 In 1903, Horatio Nelson Jackson, left, and his mechanic and sometimes chauffeur Sewell Crocker became the first to drive an automobile across the United States. With them is Bud, a dog they adopted along the way. Photo courtesy of UVM Special Collections/Bailey-Howe Library

It is some of the hardest work I’ve done sitting down. Hurtling along highways from Boston to Denver, stopping only for food and gas, a friend and I made it in a little over 30 hours. Aside from mild claustrophobia and a bout of exhaustion-induced double vision, the trip was uneventful – just the sort of slightly dangerous adventure young people will take on.

But Horatio Nelson Jackson should have known better. The Vermonter was 31 years old when he decided to drive cross country. And when he went, he wasn’t just one of the thousands of people tearing across the United States at the time, like I’d been. He was trying to become the first.

Jackson started his trip farther west than I made it. He began in San Francisco. In fact, the journey sort of started at the University Club in that city when Jackson was part of a discussion over whether anyone could even make it coast to coast by car. No one else seemed to think so.

The year was 1903. The first car had been sold in America a scant seven years before. The country did have 2.3 million miles of roads, though only 150 of them were actually paved. Another 150,000 were considered “improved,” meaning in some cases that little more than a thin layer of gravel had been scattered over them. America’s roads were “inferior to those of any civilized country,” one social critic said at the time. 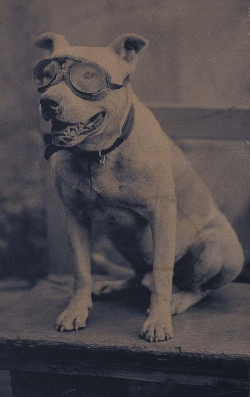 Horatio Nelson Jackson purchased a pair of goggles to keep the dust out of the eyes of his dog, Bud. Soon, Bud supposedly refused to ride in the automobile without his goggles. Photo courtesy of UVM Special Collections/Bailey-Howe Library

Still, Jackson was sure it could be done. Legend has it he bet someone at the club $50 he’d complete the trip in less than three months.

Jackson, a Burlington physician who married well, had been visiting California all winter with his wife, Bertha Richardson Wells, and needed to travel home anyway to resume his practice. He saw Bertha off on an eastbound train and promised to see her within three months.

Then he set off on his adventure. With him was Sewell Crocker, a mechanic-chauffeur, who several months earlier had taught Jackson how to drive a motorcar.

At Crocker’s suggestion, Jackson had purchased a 20-horsepower, two-cylinder 1903 Winton Touring Car. The vehicle was the product of the Winton Motor Carriage Company, which until recently had been the Winton Bicycle Company of Cleveland. Jackson named his car “The Vermont.”

Vehicles were rare enough in those days – fewer than 33,000 were on American roads – that Jackson had to buy his car secondhand from a Wells Fargo banker who charged him $3,000 for the car, or $500 more than the banker himself had paid. Incidentally, that $500 was equivalent to the average annual income for an industrial worker at the time.

Jackson didn’t get much for his money. The Winton was a stunted, barebones affair. In photographs, it looks like a vehicle you would cobble together if all you had was a soapbox derby car, four beefy bicycle tires and a leather loveseat. The Winton didn’t even have a roof or windshield, those accessories were just being added to new automobiles that year.

If Jackson’s car was stripped down, his packing list was not. He wrote that it included “sleeping bags, rubber mackintoshes, for the car and ourselves, leather coats, sweaters, canvas water bag, canteen, a cooking outfit, shot gun, rifle, pistols, ammunition, fishing tackle, a block-and-tackle with 150 feet of rope, a fireman’s axe, a spade, two jacks, a vise, a set of tools, and two telescope valises for clothing.” They also found room for “a medicine chest, a few books, and – most useful of all – pneumatic mattresses of rubber.”

Jackson and Crocker set out on May 23, just four days after the discussion at the University Club. They planned to start by traveling east along the right of way of the Southern Pacific Railroad, but upon reaching Sacramento they learned that the Sierra Mountain passes were still blocked by snow. So they decided to travel via Oregon instead, tacking another 1,000 miles or so onto the trip.

The going was rough. They drove along stretches of the Oregon Trail, a road rutted by the wheels of Conestoga wagons that had headed west 60 years earlier. When they crossed mountain passes, they used trails meant for wagons not a car with a mere 10 inches of clearance. So rocks in the roadbed inevitably got in their way, forcing Jackson and Crocker to remove the small boulders or jack the Winton over them.

At first I thought that Jackson and Crocker viewed these obstacles as “normal.” I changed my mind while leafing through an album at the University of Vermont’s Bailey-Howe Library of photos that Jackson took along the way. In addition to the obligatory pictures of each man taking his turn to pose behind the steering wheel, there are many photos taken from the passenger seat of the road ahead. The shaky blur in the photos suggests they were taken while the car was moving. It is as if Jackson wanted us to know the dangers and hardships he faced.

In one shot, it looks like the car is heading down a road that is little more than a cleared path through a rockslide. The road ahead in another photo is just a pair of parallel tracks skirting the edge of a ravine. In an often reproduced image, Jackson leans against the Winton as he tries to push it out of one of the watery “buffalo wallows” they encountered along the route.

Water was perhaps a greater obstacle than the mountains. At large rivers, the men would cross by driving up or downriver to the next railroad bridge, then rattle across the elevated ties. They would attempt to ford smaller streams. If they got stuck, which they managed to do 17 times in one memorable day, they would rig the block and tackle around the brake drum on the rear wheel and use the engine to drag the car out. 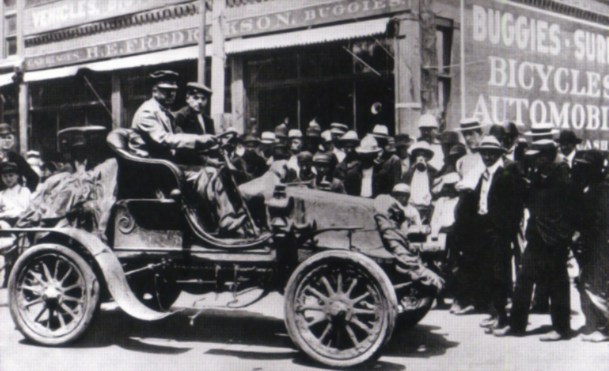 Since there were no service stations to help, Jackson – or more accurately Crocker – had to fend for himself. When the Winton broke its front axle, Crocker rigged a makeshift repair with spare parts obtained from a nearby farmer. The repair held for the 20 miles they gingerly traveled before finding a blacksmith to fix the axle.

Three times they had to wire for parts. They bought replacement tires from Goodrich when the originals sprang unfixable leaks despite the men’s efforts to protect them with burlap. And twice they had to telegraph the Winton Motor Carriage Company for parts when a connecting rod studbolt broke and pierced the crankcase cover. Each time, the parts for the Winton took five days to arrive by rail.

The car burned the same fuel that was then used in heating stoves, so the men could buy it at hardware stores. The tank held 10 gallons and they strapped another 12 beneath the car, which managed an estimated seven miles per gallon. Once, in Medicine Bow, Wyoming, a sharp storekeeper noticed that they were almost out of fuel and had nowhere else to turn, so he charged them $1.05 a gallon, three times the going rate. Being gouged was especially painful, Jackson said later, when he learned that the man was a transplanted Vermonter.

The other time Jackson reported someone doing him a bad turn had been in Idaho, when a woman had given him directions that took him 60 miles out of his way just so some of her relatives could see a motorcar.

Along the way, Jackson and Crocker picked up a four-legged hitchhiker by the name of Bud. Described variously as a bulldog or a terrier, Bud quickly took to driving, and the men quickly took to him. When the dusty roads bothered Bud’s eyes, Jackson bought him a pair of goggles and soon Bud refused to get in the car without them.

The men also got news of two other driving teams trying to be the first across the continent, but Jackson and Crocker had a solid head start.

On July 26, they rolled into Manhattan, 63 days after they had departed. Their cross-country escapade, which rarely hit the car’s top speed of 20 miles an hour, was over. After several days of celebrations and tributes, Jackson had had enough. He wanted to go home.

So he drove north in the Vermont, which today resides at the Smithsonian Institution.

Perhaps he was thinking of his place in history as he headed home. Or maybe he was tallying what the trip had cost him. Even if he collected the $50 from the bet, the trip still set him back about $8,000 when you calculate the price of car, Crocker’s salary, 800 gallons of gas, etc.

Something must have been on his mind as he cruised back into Burlington, because he ignored the local 6 mph speed limit. And that cost him another $5.

We are halfway through our Spring Drive. Will you support local journalism and help us send brand new books to 3,000 Vermont children by April 30? We will send one book for every donation we receive through our partnership with the Children's Literacy Foundation.

Thanks for reporting an error with the story, "Then Again: Speeding cross-country … at 20 mph (tops)"

Charles Martin: Act 250 and the stifling of economic opportunity in Vermont

Karl Meyer: Why renew a federal license to continue killing a river?