[P]ublic safety officials and meteorologists are encouraging Vermonters to take precaution as a looming heat wave moves in over the weekend.

Potentially record-breaking temperatures, possibly as warm as 100, are expected to hit all parts of the state starting on Saturday, and last for an extended time period.

Scott Whittier, a National Weather Service meteorologist in Burlington, said the length and temperature of the heat wave is something northern New England rarely experiences – only once around every 15 years. 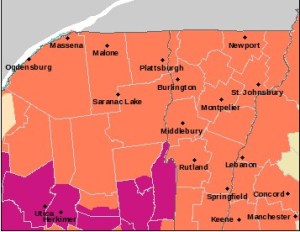 Temperatures are expected to first climb up into the 90s on Saturday and continue to rise into Sunday and Monday before gradually beginning to cool off during the middle of the week.

Whittier said early forecasts projected that Burlington would hit 100, but recent rainfall will likely push the temperature down just below that figure to around 98 or 99. Precipitation reduces heat by prompting the sun to use energy to evaporate water, rather than increase temperatures.

To determine a “feels like” temperature, meteorologists use a measurement known as “heat index,” which takes into account humidity.

During the predicted peak of the heatwave, on Sunday and Monday, the heat index is expected to be around 105 or higher in the Burlington area, Whittier said.

Worcester-based meteorologist Roger Hill, who reports weather for Radio Vermont, said the Champlain and Connecticut River valleys will see the hottest temperatures, while higher elevations, such as the Northeast Kingdom, will be slightly cooler.

“Up in our northern climate a lot of us don’t have air conditioning, we don’t see heat like very often,” he said. “It’s certainly going to be a hardship.”

Hill said this heat wave is the result of a large ridge of higher pressure that originated in northern Mexico and has worked its way northeast.

The hot temperatures are also paired with the phenomenon of a “heat dome,” which is created by air stagnation and can reduce air quality each day. Pollution from industrial areas, such as Montreal, will become trapped in Vermont’s system.

Hill said the scorching temps will be “dangerous,” could last in the 90s possibly as far as the Fourth of July, and will remain in the high 80s into next Friday or Saturday. He said Independence Day will be a “firecracker.”

“For us in Northern New England it’s just intolerable,” Hill said. “We’re not accustomed to that sort of weather.”

How to beat the heat and stay safe

Vermont Emergency Management Director Erica Bornemann said her department is encouraging people to practice safe activities for extreme heat, including staying hydrated, and limiting activity during the most time of day when the temperatures are most extreme.

People also need to make sure they don’t leave pets or kids in a car for any length of time.

She said Vermonters should make a plan now for finding a place to cool off, whether it be visiting an air-conditioned library, mall or grocery or taking a swim.

Green Mountain Power sent out a news release Thursday reminding Vermonters to be careful around waterways with hydroelectric dams when looking to cool off.

“Vermonters need to be aware that water conditions in and around rivers and reservoirs associated with hydroelectric facilities may change rapidly,” the release said. “Pay attention to warning signs and markers as some spots are off limits to the public for safety reasons.”

Bornemann said her department has been working closely with the National Weather Service and the Department of Health to relay safety information, as well as working with local directors to see if support is needed in opening local cooling facilities.

Burlington plans to open three public cooling stations during the peak hours of heat, to ensure access to air conditioning for those who need it. Other cooling centers can be found by calling 211, and Vermonters can sign up for alerts at vtalert.gov.

“This is certainly concerning, especially with the duration,” Bornemann said. “We’re really asking folks to be aware of that, and make decisions with the weather in mind and their family’s health in mind.”

“I ask all Vermonters to take extra caution with children and pets who cannot care for themselves, and to check on the elderly and those who may otherwise need special assistance to make sure they are okay,” Scott said.

Hill said people should think of this heatwave as a 30-inch snowstorm. People should check on neighbors, particularly those who are elderly.

Whittier and Bornemann both said the duration of the heat will have the biggest impact. But the good news is that the human body will gradually become accustomed to the change.

“It wears you down, there’s a cumulative effect, especially if you can’t find any coolness,” said Whittier, of the National Weather Service.

One for the record books?

Forecasters say there is a possibility that the heat wave could break individual temperature records in the region, particularly on Sunday and Monday.

Hill predicts Montpelier will break its record high of 90 degrees for Monday, which was recorded in 1985, and the capital city could also be on track to tie its record of 91 degrees for Tuesday.

In other parts of the state, White River Junction and pockets of lower elevation river valleys could potentially crack 100 degrees.

Burlington last hit 100 degrees on July 14, 1995. The Queen City’s all-time record high is 101 degrees, set in 1944, according to Whittier. However, experts predict that to remain unbroken this heat wave.

“This is going to be five to six days of pretty good heat that people in our region really just aren’t accustomed to,” Hill said.

Homeowners urged to cut back electricity

High temperatures are expected to be followed by high electricity use.

The Vermont Electric Cooperative is asking members to minimize energy use on Monday and Tuesday, as the demand for electricity is anticipated to spike throughout the region. People can help reduce rates long term by turning off unnecessary lights and delaying the use of major appliances to outside peak hours.

The Burlington Electric Department is also asking for residents to reduce electricity use during the period of high demand. That effort is part of the city’s plan to evolve into a net-zero city.

Thanks for reporting an error with the story, "Scorching temps to reach ‘dangerous’ levels"