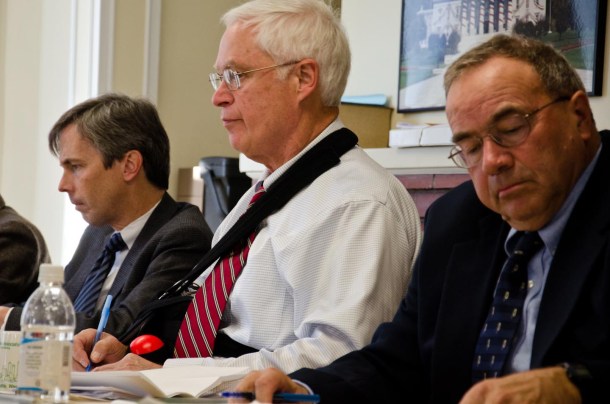 The Vermont Labor Relations Board, from left, Gary Karnedy, Chairman Richard Park and James Kiehle, in 2011. Karnedy is no longer on the board. Photo by Josh Larkin/VTDigger

[V]ermont’s Labor Review Board has written to Gov. Phil Scott’s administration questioning the legitimacy of the selection process for new members. However, an attorney for the administration says there are no plans to make changes.

Richard Park, chair of the board, and Edward Clark, a member, wrote to Scott on June 19 raising their concern that the administration had not made changes to the Labor Board Review Panel, which selects VLRB members, since a dispute over the attempted appointment of attorney Karen O’Neill.

O’Neill’s appointment was protested by labor unions and ultimately blocked by the Senate. Their main grievance was that she was appointed to a neutral position despite a career spent in management positions.

Unions also complained that the review panel that selected candidates for the position was assembled without the required involvement of labor organizations. Park and Clark agreed with this conclusion, and said future candidates — including three currently under review — might lack legitimacy if changes were not made.

“We are concerned that the legitimacy of any future appointments made to the Labor Relations Board may be questioned under this present arrangement because the Labor Representative has not been appointed to the Review Panel from names provided by ‘labor organizations’ as required by 3 V.S.A. § 921 (a)(1),” the letter says, referring to the statute on the labor board.

Labor Commissioner Lindsay Kurrle selected Jeff Wimette, a leader of the International Brotherhood of Electrical Workers, Local Union 300, for the single seat on the Labor Review Panel, without soliciting names from multiple labor organizations, in violation of the statute, according to the letter.

“The statutory language is in the plural, explicitly requiring input from more than one labor organization before appointing the Labor Representative to the Review Panel,” Park and Clark write. “We raise this concern now so that a correction consistent with statutory direction may be made prior to any further Board appointments.”

The letter says the change is necessary to ensure the legitimacy of three incoming candidates currently in the process of being selected, and so that there are not appeals of future decisions made by the labor board.

Dirk Andersen, general counsel for the Vermont Department of Labor, said there were no plans to change the review panel composition for the current selection process.

“At this time we are not planning on changing the process,” he said, adding that he “believes the panel was properly selected.”

Andersen said the department was well aware of the issues raised by labor unions and had seen the VLRB letter, but said that the changes they are suggesting for “would not have mandated any different appointment.”

“Yes, the language is plural, but the commissioner did consult with labor and management” before making appointments to the Labor Review Panel, he said.

Andersen noted that the labor unions that had contested the selection of O’Neill had withdrawn a lawsuit against the department.

Steve Howard, executive director of the Vermont State Employees Association, said the lawsuit was withdrawn because it revolved around the appointment of O’Neill, who was blocked.

The VSEA is still seeking a review of the VLRB decision in March to select the administration’s offer after a prolonged contract dispute between state employees and the governor, he said.

O’Neill was among a majority of the members who chose the administration’s offer, despite a fact-finder making a recommendation in favor of the union. Howard says Scott intentionally “stacked the deck” for that decision because it was the only way to prevail.

“If the governor continues to stack the deck, we will go back to court again,” he said.

“I think it’s the height of arrogance to suggest that they can ignore the law,” Howard said of the selection process for Wimette, adding that the administration appeared to be avoiding its legal obligation to engage unions in a process that already marginalized labor voices.

“They don’t have to agree with the labor movement, but if they want to have a non-antagonistic relationship than they would consult with us and have us submit names,” Howard said. “It’s very clear what the law is.”

Thanks for reporting an error with the story, "Facing legal questions, Scott standing firm on labor board process"