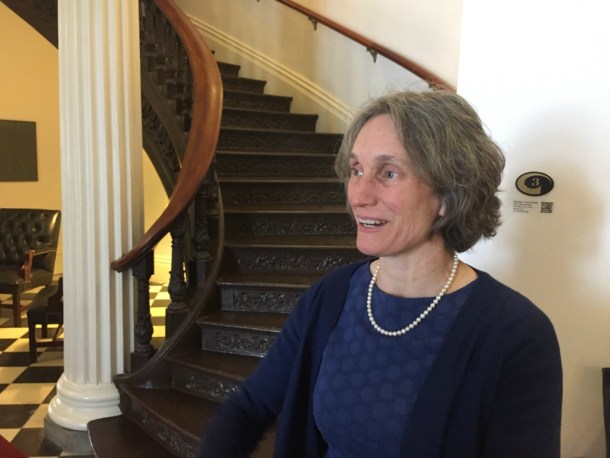 Rebecca Holcombe, the secretary of the state Agency of Education, at the Statehouse on March 15, 2017. File photo by Erin Mansfield/VTDigger

[R]ebecca Holcombe, who abruptly resigned as Gov. Phil Scott’s secretary of education a little more than a month ago, may run against Scott this November, according to informed Democratic Party sources.

“It’s more than just a rumor,” said one knowledgeable Democrat, who added that it was not certain Holcombe had made a final decision.

Holcombe could not be reached. But she reportedly spoke at a rally held by the Vermont National Education Association last weekend, and some Democratic sources said they understood that she or someone on her behalf had commissioned a poll.

A Holcombe candidacy might help explain at the same time that it poses more questions about her curious departure from the Scott administration. Both she and the governor announced on March 27 that she was quitting, with her resignation to take effect April 1.

There’s nothing unusual about senior state officials quitting. But not effective in five days. At the time, Scott said that “Rebecca decided that it was time for her. This was her decision.”

But some lawmakers speculated that the governor and his education secretary, who had been appointed by Democratic Gov. Peter Shumlin in 2014, had some serious policy differences over school financing, and that after failing to convince Scott to ease up on his commitment to hold down school spending, she decided she could no longer serve in his administration. Heather Bouchey is the acting secretary of education.

Holcombe, who lives in Norwich, has been an educator and education administrator who has never run for office. If she is to face Scott, she first has to win a Democratic primary on Aug. 14 against environmental activist James Ehlers, former utility company executive Christine Hallquist, and Brattleboro author/arts educator Brenda Siegel.

Holcombe might get support from teachers, but on Wednesday Vermont AFL-CIO President Jill Charbonneau said her organization was endorsing Ehlers.

“James came to the executive board meeting and it was unanimous,” said Charbonneau, who said Ehlers, “really speaks for workers.”

Hallquist, the first transgender person to run for governor of any state, has been endorsed by the LGBTQ Victory Fund.

Thanks for reporting an error with the story, "Margolis: Holcombe may run for governor"