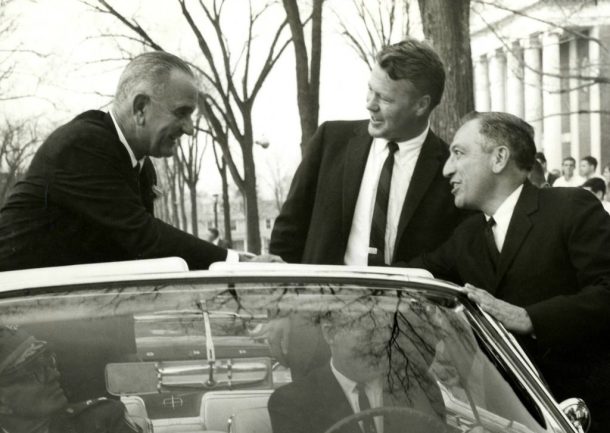 [P]hilip Hoff was the Democratic candidate for Vermont governor in 1962 when he called his father in Massachusetts with an invitation to dinner on election night.

“I don’t know,” Hoff would remember his father saying. “Are you going to win?”

“Dad, they’ve never elected a Democrat by popular vote in the history of the state,” the candidate replied. “I can’t promise you that. But I think I’ve got a shot.”

Americans today know Vermont as the home of Bernie Sanders and Ben & Jerry’s. But back before the interstate and the internet, the state was the only one in the nation to have supported the top of every Republican ticket — Richard Nixon included — since the Grand Old Party’s founding in 1854.

Listen to Mark Johnson's 2012 interview on WDEV with Hoff about his three terms, courtship of his wife Joan and battle with alcohol.

That changed 56 years ago when Hoff, a young, charismatic counterpart of President John F. Kennedy, shattered political tradition — something he kept doing right up to his death Thursday at The Residence at Shelburne Bay at age 93.

“No individual deserves more credit (or in the view of political rivals more blame) for the transformation of Vermont than Philip Hoff,” Samuel Hand, Anthony Marro and Stephen Terry wrote in their 2011 book “Philip Hoff: How Red Turned Blue in the Green Mountain State.”

“Hoff would oversee changes more sweeping and dramatic than in any comparable period in the state’s history before or since,” the historians continued, “changes that would stay in place long after he had left the governor’s office.”

Changes many Vermonters may be surprised to find still shape their lives today.

During Hoff’s tenure, the Vermont House reapportioned itself from a chamber where each of the state’s 246 cities and towns had its own representative to the current 150-member body.

The newly streamlined Legislature went on to ban billboards that once cluttered state highways, move then-local welfare programs to Montpelier, end the poll tax as a voting requirement, convert the state income tax to a percentage of the federal rate, and create what’s now the Vermont Student Assistance Corp., area agencies on aging, Legal Aid and Vermont Public Television.

Much of Hoff’s agenda was so ahead of its time it wasn’t approved until after his departure in 1969. Take his planting the idea of land-use planning that led to Act 250 under Gov. Deane Davis in the 1970s. Or his push to import Canadian electricity that drew power when Gov. Richard Snelling secured a contract with Hydro-Quebec in the 1980s. Or his call for a school funding law, requiring richer areas to help poorer ones, that mirrored the act signed by Gov. Howard Dean in the 1990s.

The father of four and grandfather of six continued to be a forward thinker out of office. An advocate against war and for civil rights, Hoff was the first mainstream politician to endorse Sanders during the independent’s historic congressional election in 1990 and an early supporter when the state became the first to adopt civil unions in 2000 and approve same-sex marriage without a court mandate in 2009.

‘The one to tip the balance’

Hoff, born in 1924 in the small town of Turners Falls, Massachusetts, was the son of a “rock-ribbed Republican” who owned a local foundry. He felt his first Democratic stirrings at age 8 when he watched Depression-era workers celebrate the 1932 win of President Franklin D. Roosevelt.

“I remember my father by my side and he was waving to them, jovial,” Hoff recalled. “They were good natured, but there was an undercurrent there, underneath it was a real edge. They were saying, ‘You people no longer control my destiny — I’m going to have a fair say.’ I picked that up.”

Going on to graduate from Cornell Law School, Hoff moved to Burlington in 1951, lost a bid for City Council in the winter of 1960, then won a state House seat that fall. Two years after making headlines as a “Young Turk” in Montpelier, he announced he’d run against Republican Gov. F. Ray Keyser Jr. 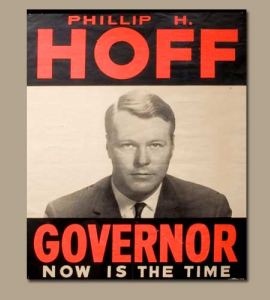 Hoff was two years older than Keyser, who, at age 35, was the nation’s youngest governor. But peers and the press described the incumbent as “competent” if “not an exciting guy.” Hoff, in contrast, drew such adjectives as “tall,” “blond” and “handsome” — attributes that helped him compensate for a lack of money and staff.

Terry, a former Vermont Press Bureau reporter who covered Hoff’s second and third terms, tells a story about a campaign swing through the old Pownal Tannery. Two women were stacking hides when Hoff asked for their vote.

“This one lady turned to another,” Terry recalls, “and said, ‘He can put his shoes under my bed anytime he wants.’”

The only previous Democrat to serve as Vermont governor, John Robinson, did so only because he lost the 1853 vote yet, after no candidate polled 50 percent, won a fluke legislative tiebreaker by one ballot.

On election night a century later, Hoff trailed by less than 1,000 votes with just the Democratic stronghold of Winooski left to report.

“It became very clear,” Hoff recalled, “they were deliberately holding the vote so that it would be the one to tip the balance.”

Just before 1 a.m., Winooski went for the Democrat 1,768 to 188, catapulting him to a 1,348-vote (or 50.5 percent) statewide victory. Minutes later, the winner was whisked to the middle of the city. There was no platform or no speaker system. Still, the crowd that spilled into the streets could hear Hoff shout, “One hundred years of Republican bondage broken!”

That’s when someone threw him a cut-out crown.

“King of Winooski,” it said.

Hoff put it on. A flashbulb popped. For one happy, heady moment, he was King of Vermont.

‘Stand for what you believe’

“I was an issue-oriented reformer,” he summed up his tenure, “who believed in change and opening up government to ordinary people. If you give them adequate information and respect them and honor them, they will do the right thing every time. The modern tendency in which people are not trusted, so you end up manipulating them, you do not give them the whole truth, you give them a distorted version of the facts — I’m violently opposed to that.”

As leader of one of the whitest states in the nation, Hoff repeatedly spoke out for racial equality — a hot-button issue even before someone in a speeding car shot at the home of a black Northeast Kingdom minister in the “Irasburg Affair” of 1968.

That same year, Hoff was the first Democratic governor to break with President Lyndon Johnson over the Vietnam War, then endorse Robert Kennedy for the White House, then call on then-Vice President Hubert Humphrey to resign as a gesture against the administration’s battle plans.

Humphrey instead ran for president. Soon Democrats wanted the Vermont governor to run for vice president against fellow New Englander Edmund Muskie at their tumultuous convention in Chicago.

“They asked me to be a token challenge,” Hoff recalled. “And if it had been anybody other than Ed Muskie, I would probably have gone through with it.”

“His growing opposition to the war and his growing advocacy of civil rights can be seen in retrospect as having been both correct and courageous,” Hand, Marro and Terry wrote in their book. “But he took the right stands at the wrong time and in the process sowed the seeds of his political demise.”

Hoff went on to lose a 1970 U.S. Senate bid after announcing he was an alcoholic — a bold move, just “not the smartest one,” he said after. He returned to politics in 1982 to serve three terms in the state Senate. Doing so, he finally won funding for the Human Rights Commission he had created in 1967.

“The truth of the matter is our administration — I say ours and not mine — set the agenda for Vermont for at least 25 years, and parts of it exist even today,” he said. 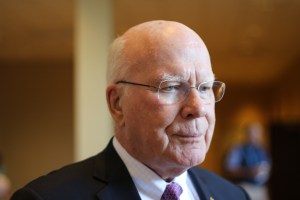 Hoff had personal connections to many of the state’s officeholders past and present. Sen. Patrick Leahy, D-Vt., started his law career in Hoff’s firm and was appointed Chittenden County state’s attorney by his boss in 1966. Tom Salmon, the state’s second Democratic governor, was Hoff’s Windham County campaign manager. Dean was once Hoff’s doctor.

But in retirement, Hoff spent more time mulling over a question from his grandson.

“He said to me, ‘Why is it that people won’t stand up for the things they really believe in anymore?’ I couldn’t answer that. There’s been a tendency for people who are in office to simply be involved with re-election as opposed to what they really should do. If you’re only interested in holding the office, what’s the sake of holding the office? It seems to me you ought to stand for what you believe. You may lose, but in the overall thrust of history, you will make a difference.”

A memorial service is set for May 12 at 11 a.m. at Burlington’s Cathedral Church of St. Paul.

Thanks for reporting an error with the story, "Democratic groundbreaker former Gov. Phil Hoff dies"