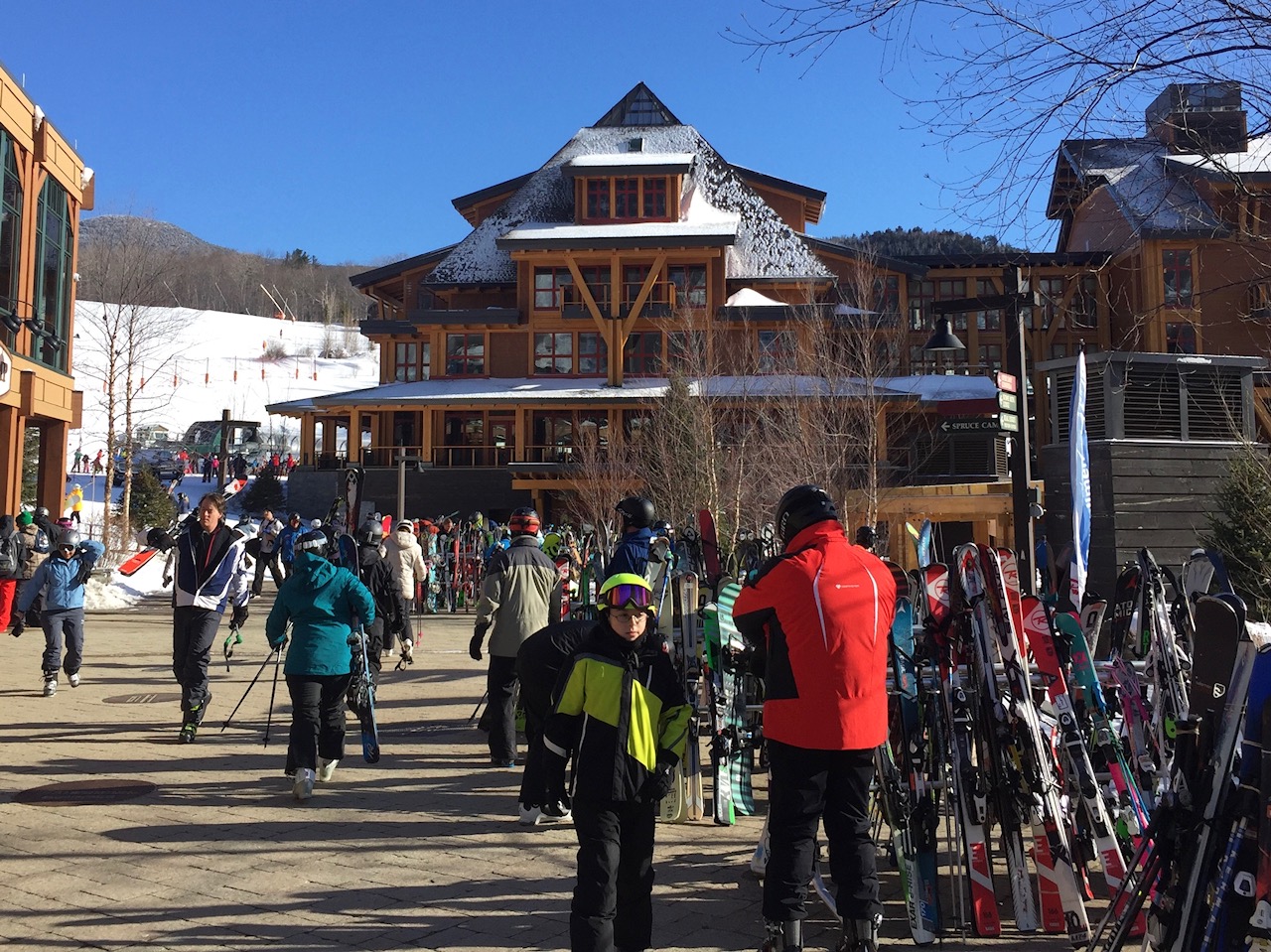 [B]ENNINGTON — The ski industry New Englanders have enjoyed for decades is sliding toward a meltdown, according to researcher Elizabeth Burakowski.

The level of severity, she said during a lecture at Bennington College, depends on whether climate warming can be halted through a shift away from fossil fuel energy sources.

“Ultimately, this comes down to reducing [carbon] emissions,” she said.

An earth scientist who says she expressed a fascination with snow from an early age, Burakowski is an assistant professor at the University of New Hampshire. She’s currently collaborating with economists to analyze how decreases in snow pack because of warming are affecting the multi-billion-dollar winter sports industry.

What’s at stake, she said, is more than just an important industry in the Northeast. An entire wintertime culture, shared by families over generations, also is at risk.

As a child, her home ski area was Suicide Six in Pomfret, she said, describing how her parents took her there and how many New Englanders have had similar experiences.

“This was my first mountain,” Burakowski said. “I remember bouncing on the J-bar.”

For many, learning to ski at one of hundreds of smaller ski areas in the region became “part of our culture and the way we live our lives in New England,” she said, prompting several in the audience to recall the site of their first ski experience.

But while the reasons vary widely, she said, about 600 ski areas in the region have shut down since the 1950s, as recorded on the New England Lost Ski Area Project website.

A significant factor, she said, has been the effect of warming on average winter temperatures and the viability of the snow cover away from the taller mountain peaks and ridges.

Burakowski said the U.S. ski industry was responsible for $11.3 billion in direct spending during 2015-16 and supported about 191,000 jobs — exclusive of the indirect spending generated around the resorts and by employees in the area.

And that was a warmer than usual season, she said, adding that an average of top spending seasons showed about $692 million more was generated in those years, along with about 11,000 more jobs on average.

However, during the least successful seasons, there was about a $1 billion decrease relative to the long-term average, and 17,400 fewer jobs were generated.

Capacity restraints at resorts tend to cap how much more income is generated in a good season, Burakowski said, but “the bottom can fall out” during a warmer, less profitable winter.

Vermont led the Northeast in 2015-16, with about $595 million in economic impact from the ski industry, she said, while New York was at $591 million and New Hampshire at $340 million.

As a measure of the impact of skiing on surrounding areas, Burakowski said that in the northern counties of New Hampshire, up to 45 percent of the winter economy there depends on winter sports.

Resorts have tried to adapt to a warming climate, she said, using more energy-efficient snowmaking equipment — including for Nordic skiing — and by expanding other entertainment options for visitors to the mountains, both in-season and during the summer.

Consolidation of major ski resorts, often combining areas in the West with some in New England, also is a trend, she said. Owning a resort in the Rockies can be a hedge against a warm season in Vermont, Burakowski said, as nature typically “flips and flops” in terms of heavy snowfall from one region to the other.

From her research and that of other scientists, she presented images and sobering statistics on shrinking arctic ice, declining snowfall levels and snowpack around ski resorts; lake ice changes affecting ice-out times and ice fishing seasons; earlier spring-like temperatures affecting ecosystems, and a lengthening mud season. 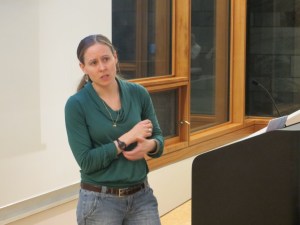 “All the signs are there,” Burakowski said, for continuing changes from the traditional winter season.

A lot of the global warming effect is concentrated in the Northern Hemisphere, she said, and apparently is related to shrinking of the Arctic ice cap, which has been monitored since 1979 through satellite images. Those photos reveal significant reductions in the ice cover since the early 2000s.

“What we are seeing, is that what happens in the Arctic probably doesn’t stay in the Arctic,” she said, referring to seasonal changes evident throughout the continental U.S.

She displayed some long-term temperature models reflecting average increases depending on whether carbon dioxide levels are kept low or increase. The warming, as estimated by climate scientists, she said, ranges from about 2 degrees to 10 degrees.

A graph showing average temperatures from 1880 to the present, she said, shows a relatively stable line with moderate ups and downs before the late 1970s. A warming trend dating to that period has spiked during several years over the past decade.

“It’s going to keep going in that direction,” she said.

There also are “thousands of indicators around the world, not just temperature,” she said of the types of measurements researchers are recording. She said those include:

• An earlier retreat of lake ice and a decline in the number of days suitable for ice fishing. At Lake Winnipesaukee in New Hampshire, she said, detailed ice-related records have been kept since 1880 and clearly chart the changes.

• Warming has resulted in “about an extra week of mud season since the 1960s.”

• There is a shrinking zone — mostly around mountains — where the snow cover remains intact for more than 30 days during the winter on average.

• Climate models show a sharp decline by 2100 in the number of cities around the globe that could produce a snowpack thick enough to host the Winter Olympics.

• Birds are returning to the Northeast earlier in the year.

The issue of climate change is not something Burakowski said she bothers to debate any longer with those who deny its existence.

“I’ve decided not to engage deniers,” she said. “If they are skeptical, I will engage.”

Warming caused by rising carbon dioxide levels in the atmosphere, which traps heat, is following “a very predictable trend,” she said.

When she began skiing as a child, the atmospheric level was 351 parts per million; when she later switched to snowboarding, the level was about 360 ppm; while she was a college student, that level had reached about 380 ppm, she said, and it now is more than 405 parts per million.

Burakowski said that for her, as a scientist who tries to be impartial in doing research, it was difficult to come to the realization that as a human being “you have to be political” in pushing for change on climate issues.

She advised students and others attending the lecture Friday at the Center for the Advancement of Public Action at the college, to “advocate very strongly” for the use of renewable, green energy and to act locally by reducing their own energy footprint as much as possible.

Thanks for reporting an error with the story, "Climate change viewed as serious threat to ski industry"