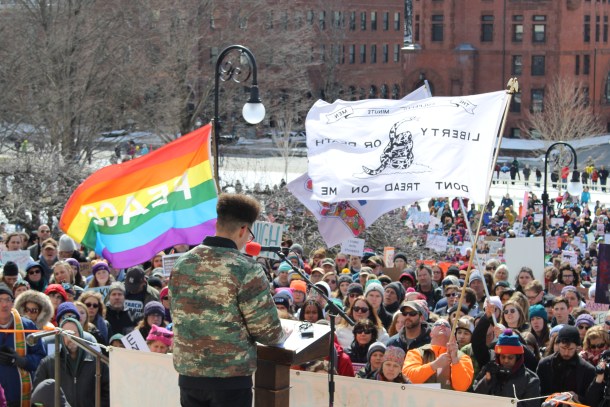 A student speaks at the March For Our Lives rally in front of the Statehouse on Saturday. Photo by Kelsey Neubauer/VTDigger

[L]ed by young Vermonters, thousands of protestors marched on the Statehouse in Montpelier on Saturday to call for reforms to the nation's gun laws.

The crowd of 2,500 gathered at the steps of the state capital to hear speakers from around the state, middle school, high school and college students of different ages and backgrounds but speaking with one voice for reform of gun laws, after years of witnessing one mass shooting after another, in schools, at rock concerts, in clubs.

Madison Knoop, a first-year student at Johnson State College and an organizer of the event, reminded the crowd why they had gathered. “We are here for commonsense gun laws that keep people safe," Knoop said. "We are here to support our youth who are fighting. We are here because gun violence is a public health issue. We are here because our Congress will not act."

The event was one of hundreds of marches held around the country.

Dozens of cardboard signs were on display on the steps of the Statehouse, each bearing a statement by a group affected by gun violence. Above the signs protesters hung photographs of children killed in school shootings, from the 1999 Columbine massacre to the February shooting in Parkland, Florida.

The timing of the event, the day after the preliminary approval of a landmark gun bill by the House on Friday evening, was noted by many. Speakers applauded the action on S.55, which expands background checks, prohibits sale of a gun to those under 21 and makes magazines that hold more than 10 rounds illegal.

The momentum for gun legislation in Montpelier had been building since last month, prompted by a thwarted attack on a Fair Haven school closely following the shooting at the Marjory Stoneman Douglas High School in Parkland, Florida.

In other areas of the state, local rallies attracted hundreds more. Organizers in Putney estimated about 400 in attendance, and in Middlebury there were hundreds as well. The youngest speakers at these rallies was 9 years old.

Knoop and other student speakers in Montpelier raised the impacts of gun violence across race, sexual orientation and more.

“Today, we acknowledge the work that communities of color have been doing for far too long and join them in their battle,” Knoop said.

Brandon Johansen, 18, from Burlington, read his poem, “When a Black Boy Meets the Sun.”

Johansen referred to the stories of Tamir Rice and Michael Brown, who were both shot by police while unarmed.

Johansen took aim at a portrayal of Rice and Brown as “black men” even though they were age 12 and 18 at the time they were killed. He emphasized the term “black boy,” stating that their innocence has been covered up by calling the children “men.”

“He won’t be remembered as a black boy, but as a nameless man, a danger, a threat, he will be able to answer no question, but at least his mama will see him smile, at least he’ll look nice when he meets the sun,” he said.

Hannah Pandia, a student from St. Johnsbury Academy, referred to the mass shooting at Pulse, a gay nightclub in Orlando, in 2016.

“As a young queer woman, this event shook me to my core, especially after the statements came out that what set off the most deadly mass shootings in American history was the sight of two men kissing,” Pandia said. “The fact that he had access to weapons that allowed him to murder 49 people as they danced the night away in the one place that should have been safe.”

Others highlighted the issue of the mix of firearms with domestic violence.

Clai Lasher-Sommers, president of Gun Sense Vermont, told the crowd she was shot by her stepfather when she was 13 years old, leaving her unable to walk for several months.

“My truth of domestic violence starts with being shot,” Lasher-Sommers said.

She said she has been working to promote gun control legislation for a long time, and said it is the students who have built momentum on the issue.

Several Vermont lawmakers and politicians, including Sen. Bernie Sanders, I-Vt., and Rep. Peter Welch, D-Vt., joined the crowd, but did not take the podium.

High-schoolers from across the state came to attend the rally. Four Harwood Union freshmen, Siena Mazer, Emily Bryant, Leena Cherryholmes and Charlotte Maise, all from Moretown, stood in the very front of the rally.

“I think this is some bull that people think that background checks are not going to work,” Maise said.

They said that they were approached earlier by a counter demonstrator, who handed them a copy of the Constitution and said he wanted to educate them. They handed the copy back.

“This is about our freedom. This is what’s right,” Bryant said.

Thanks for reporting an error with the story, "2,500 march on Montpelier for 'commonsense gun laws'"