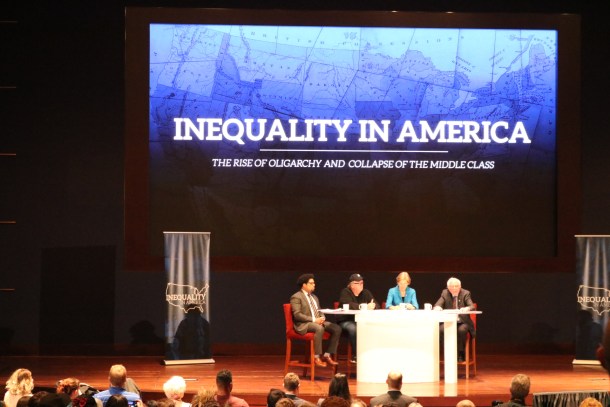 The event was the second town hall the Vermont independent has held at the Capitol this year. At the first event in January, which drew more than 1 million live viewers, Sanders and a panel made the case for a single-payer health care system — a proposal the senator has pitched for decades.

Like the first town hall event, Sanders focused the second panel discussion on one of the other longstanding themes of his political career: economic inequality.

The event was broadcast online through media partners the Guardian, NowThis, The Young Turks and Act.tv.

Sanders took to the stage to cheers and applause from hundreds of people at the U.S. Capitol. He was flanked by more star power than his first event — including one of his chief allies in the Senate, Sen. Elizabeth Warren, D-Mass., activist filmmaker Michael Moore, and Darrick Hamilton, an economics and urban policy professor at the New School.

Over the course of the 90-minute town hall, the panel pointed to examples of extreme poverty in the United States, called for a resurgence of unions, and took aim at the political power of wealthy corporations and individuals.

Catherine Coleman Flowers, an activist who works in Alabama, said in Lowndes County, near the major population centers of Montgomery and Selma, raw sewage pools under mobile homes and near schools. Residents suffer from significant health problems, including tropical parasites. Economic development is nonexistent.

At one point, she said, she invited a top United Nations extreme poverty official to the area, who said the situation in Lowndes County was “uncommon in the first world.”

The panelists also made the case for labor unions as a vehicle to bolster working Americans and combat a trend of increasing wealth inequality.

Moore recalled that when he grew up in Flint, Michigan, unions were a major part of the community — even the baggers at the grocery story were organized, he said. Moore encouraged Americans, especially young people, to consider unionizing.

The Democratic Party has failed to represent working people in America, Moore said. “It’s so important that we hold the people that say that they’re for the people, hold their feet to the fire,” he said.

Hamilton talked about how economic inequality exacerbates the racial divide.

There is a substantial racial divide in wealth, he said. According to Hamilton, for a dollar of wealth possessed by a typical white household in America, a typical black household has 10 cents.

“Can we simply work hard, study hard and address inequality?” he said. “The answer is no.”

Hamilton concluded the evening with a long list of policy proposals, including establishing trust accounts for every child born in America and universal health care. The nation must also address the structural legacy of slavery, he said.

“We need to come to grips with reparations,” he said.

The panel also focused on how wealthy corporations and individuals exert political power. Sanders said it’s not sufficient to “rant and rave”; he called for a comprehensive vision for the future of the country.

In response to charges from critics that his objectives are too radical, Sanders retorted that the policies he supports have been implemented in other countries.

“And you can watch television until the cows come home — we say that in Vermont — and you will not know that the United States in the only major country on earth not to guarantee health care for all people,” he said.

At several points during the evening, Sanders and his fellow panelists lamented what they said is a lack of attention among the “corporate media” on poverty and economic inequality — “issues very, very rarely if ever” discussed, he said.

Thanks for reporting an error with the story, "Sanders economic inequality forum attracts 1.7 million viewers"