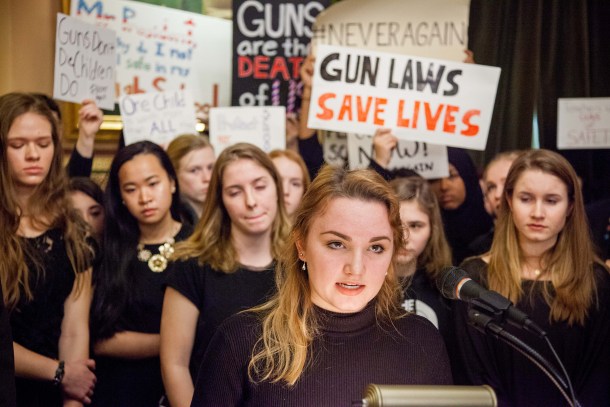 Meaghan Filkowski, a Harwood Union High School senior, was one of dozens of students who pressed legislators to tighten gun laws. Photo by Mike Dougherty/VTDigger

Gov Phil Scott’s administration says it’s open to all options when it comes to countering gun violence, especially at schools. But it has drawn a line at students walking out of those schools to call attention to the issue.

The organizers of the Women’s March have called on students across the country to stage a 17-minute walkout in honor of the 17 people killed in Parkland, Florida, demanding action to prevent similar acts of violence from happening in the future. A number of student groups in Vermont have said they plan to answer the call.

Secretary of Education Rebecca Holcombe sent a memo to school administrators on Feb. 23 urging them to work with students to find another way to express their demands. She said it was a matter of protecting students, including those who don’t want to take part.

“Schools have to be fair. We can’t support some opinions and not other opinions and our kids have pretty diverse opinions,” she said in an interview, adding some students who don’t want to take part might be stigmatized for that view.

“That is OK too, but the school is responsible for those students as much as for those that want to do it, and that is a challenge,” she said, suggesting alternative action like in-school assemblies and trips to engage lawmakers at the Statehouse.

In her memo to administrators, Holcombe said: “At a time like this, we need to hear our students’ voices more than ever. That said, the right to free speech does not extend to disrupting classes (which prevent others from learning), nor to leaving school without permission (which potentially creates a safety threat).” 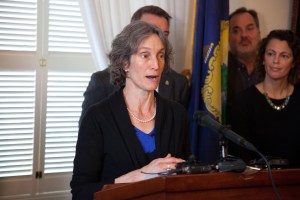 Holcombe said Vermont was part of “an extraordinary moment in history” that required young people to be engaged as citizens. “However, this also means teaching them to do so in ways that are not disruptive to the rights of others and in ways that model the skills of democracy,” she wrote.

“We are absolutely encouraging our educators to engage with students to ‘talk it out,’” Holcombe said. But the aim is to also be “civil and responsible to other students who may have legitimate reasons for not wanting to participate,” she added.

Sophia Venturo, a senior at Bellows Free Academy, St. Albans, who is helping organize a walkout there on March 14, said administrators at the school had been supportive of students standing up to gun violence. She said Holcomb’s safety concerns conveyed a failure to grasp what students like her are saying.

“They can’t guarantee our safety inside the school, that’s the whole problem,” she said.

Venturo said the committee organizing the walkout at her school had been careful not to support particular actions or political positions, but rather sought to bring students together around a general demand for change that prevents future mass shootings.

“If a student disagrees that something needs to change, I don’t think a 20-minute event outside the school is going to be a major disruption to their lives,” she said.

Jay Nichols, president of the Vermont Principals’ Association, sent a note to members in which he took a middle position on the walkouts, saying that teachers and administrators should let the students lead.

“It needs to be student generated,” he said of the walkouts. “It shouldn’t be teacher led unless the school is doing something in memory of the victims and then it needs to come from school boards and superintendents.”

Nichols said school officials could not explicitly support the walkouts, but that if students decide to do come together, “we have to be supportive of them. But it is a local school district decision that starts with the school board on how they want to handle it. And their superintendent, as their CEO, has to be involved too.”

Since the shooting in Parkland, students in dozens of states have held impromptu protests engineered through social media. In some Washington. D.C., suburbs, students walked out of school, hopped on the metro and advocated for stricter gun laws near the Capitol building.

Student actions have sparked divergent responses from school officials. Some administrations have encouraged the activities while others have punished students for leaving classes or campuses.

The wave of walkouts has led national and state education organizations to suggest alternative ways for students to protest and raise issues.

The American Civil Liberties Union has issued a two-page primer outlining protections for students and related school responsibilities. The American Association of School Administrators has a list of alternative protest options that keep students safe and protect the rights of students who disagree.

Those suggestions include wearing orange, organizing school sit-ins during breaks or before and after school, staging an “on-site” walkout to a gym or assembly area, writing letters to policymakers or inviting officials to speak about the issue at the school.

Venturo, the high school senior, said she had heard Holcomb’s concerns, but had no plans to call off the walkout.

“I’m not really interested in complying with doing things in ways that makes people in power comfortable,” she said. “I’m hoping to get those people to do things they haven’t been willing to do in the past.”

Thanks for reporting an error with the story, "Education secretary advises schools against gun-violence walkouts"