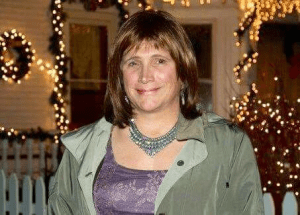 [A] utility executive who went through a high-profile gender transition is planning to run for governor.

Christine Hallquist, chief executive of the Vermont Electric Coop since 2005, will run as a Democrat, joining environmentalist James Ehlers and middle school student Ethan Sonneborn. They will compete for the right to take on Republican Gov. Phil Scott, who has said he will seek a second term in November.

Hallquist called herself a “George Aiken Democrat” and said she was motivated to run after attending the Women’s March two weeks ago.

“The message was we have to get involved,” Hallquist said Wednesday. “There are strong headwinds out of Washington, D.C., that could get worse and threaten us financially.” She also raised concerns about Washington policies such as a crackdown on “sanctuary cities,” including claims against Burlington.

Hallquist described a platform that included supporting economic growth with more “safety nets.” She said the gap in prosperity between Chittenden County and rural areas could be reduced through expanded broadband internet service. Lake Champlain cleanup and carbon reduction would be other priorities. Hallquist’s candidacy was first reported by Seven Days.

In an interview with VTDigger, Hallquist admitted voting for “nice guy” Scott in 2016. She also registered as a Republican to try to thwart Donald Trump’s nomination by voting for Ohio Gov. John Kasich in the Vermont primary, but now plans to change party affiliation.

Hallquist said she was a moderate like Aiken, a Republican Vermont political icon. He was a former governor (1937-41) and senator (1941-75) whom Hallquist said would be rejected today by his party as not conservative enough.

Political analyst Eric Davis said Hallquist or any challenger would face an uphill battle against Scott, but said an upset could occur, particularly given Trump’s unpopularity in Vermont.

Hallquist, 61, said she hoped Vermonters could “overlook some of their fears” of voting for a transgendered candidate and consider more her record at VEC, where she led a financial turnaround. The Johnson-based utility touts a 95 percent carbon-free portfolio, an effort Hallquist promoted.

“We’ll find out,” Hallquist said. “I don’t know the answer. That’s an unknown.”

“I would ask people who have fears to look at my history in terms of leadership and policy and what my plans are and try to see beyond that … and overlook some of their fears,” she said.

Hallquist openly went from Dave to Christine in 2015 and was profiled in the media during the transition, including on WCAX, the state’s most-watched local news station.

The executive director of the Vermont Democratic Party, Conor Casey, said too much emphasis on Hallquist’s transition tends to diminish her accomplishments. He described Hallquist as “a candidate who happens to be transgender.”

Davis said better-known, already elected Democrats would not risk a run against Scott after only one term and because many of those potential challengers are new in their offices. However, Davis said he would not rule out a 2018 upset in which Scott was “swamped by an overwhelming Democratic wave” because of Trump’s approval rating of 26 percent in Vermont, the lowest in the country.

Davis chastised the media for too much focus on Hallquist’s transition and that of another successful candidate in Virginia. Danica Roem, a transgender candidate, won election to the House of Delegates in November 2017.

“I am sure there are some people who asked in 1920, ‘Are Vermonters prepared to vote for a woman candidate?’ before Edna Beard became the first woman elected to the Vermont Legislature,” Davis said. “She did such a good job that, by 1924, some Republicans wanted her to run for lieutenant governor, which she declined on grounds of ill health. Same question was asked by some with regard to first African-American, first gay or lesbian, candidates.”

“The focus should be on candidates' qualifications for office, not their identity,” he said.

Casey criticized Scott as a “caretaker” who “doesn’t appear to want the job.”

Hallquist said she would have to raise a minimum of $2 million to be competitive. She told the VEC board she would make a decision on whether to run by Feb. 20, but said Wednesday that she plans to run and would step down as soon as possible from her CEO job.

Hallquist described herself as “kind and strong leader” whose strength was “getting people to migrate to the center.” Another key to leadership, she said, was assembling a team and then “being an equal and recognizing I’m not the smartest person in the room and allow them to be at their greatest potential.”

An example of her outlook on economics included the desire to end dependence on coal but an equal desire to see that Kentucky coal miners have the necessary “safety nets” of support.

Hallquist promised “the nicest race” in Vermont history if she wins the primary and will focus only on issues.

Hallquist said education spending in Vermont was too high and that school consolidation had to occur, albeit voluntarily and not by force. She pointed out that the electric utility business had consolidated significantly and naturally over the past 100 years.

Davis said Hallquist and Ehlers were both credible candidates who could assemble a staff, raise enough money and put up a challenge. Casey warned Scott the race would not be “a walk in the park.”

The more likely scenario, Davis said, was that Scott could get softened up for a bigger fight in 2020.

In 2018, Davis said, there could be “a Democratic challenge locally, and a Democratic wave nationally, that is vigorous enough to hold Scott to a victory margin of 10-12 points (rather than almost 20 points).” Such an outcome would potentially weaken him "for a more experienced challenger in 2020, which will also be a higher-turnout election than 2018.”

Hallquist, who lives in Hyde Park, describes her relationship with her spouse as “complicated” and said they were “five-star roommates” whose relationship was rooted in love.

Sonneborn, who is 13, welcomed Hallquist to the race, cited her strong business record and in a statement called Hallquist his “strongest competition in this race.”

Thanks for reporting an error with the story, "Christine Hallquist plans race for governor as Democrat"