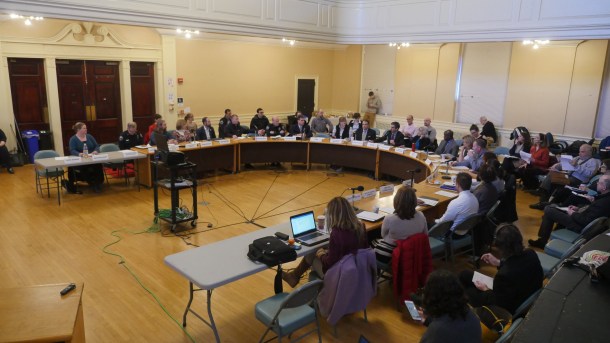 Nonprofit and city leaders meeting as CommunityStat to discuss the city's evolving response to the opioid crisis. Photo by Cory Dawson/VTDigger

[B]URLINGTON — Starting next month, drug users who have experienced an overdose can expect a visit by three city officials.

Their goal: to persuade drug users to get help.

Burlington announced on Thursday the launch of what they’re calling the Safe Response Team. Members of the team are first responders -- Burlington’s Deputy Police Chief Shawn Burke and Fire Chief Steven Locke, and Jackie Corbally, who is Burlington’s opioid policy manager. Starting in February, the three will be notified of drug overdoses; within 60 hours -- though the goal is to reach them the same day -- they will pay a personal visit to the person who has overdosed, and talk about getting help.

“We will have a really frank, empathetic, compassionate conversation,” Corbally said.

They will provide information -- how to reach Corbally, how and where to get treatment, support, and Narcan, an overdose-reversing drug. The initiative was announced at a meeting of CommunityStat, an organization of about 40 nonprofit and city leaders seeking solutions to the opioid epidemic.

The response team may not even find the overdose victim on the first try, Corbally said. But they will be “relentless,” she said.

The program will run for the next four months, with the team paying two to four visits per week. Corbally said success would be determined by the number of people who get into treatment, and whether they overdose again.

“This is far from a typical police deployment and police role,” Burke said, adding that the police will act as a “driving force” bringing a “security perspective, and 24 hour relentlessness to this team.”

Other American cities have formed response teams, Corbally said, and Burlington’s team is similar to those in Boston and Chillicothe, Ohio.

Thanks for reporting an error with the story, "Burlington response team seeks personal connection with overdose vict..."