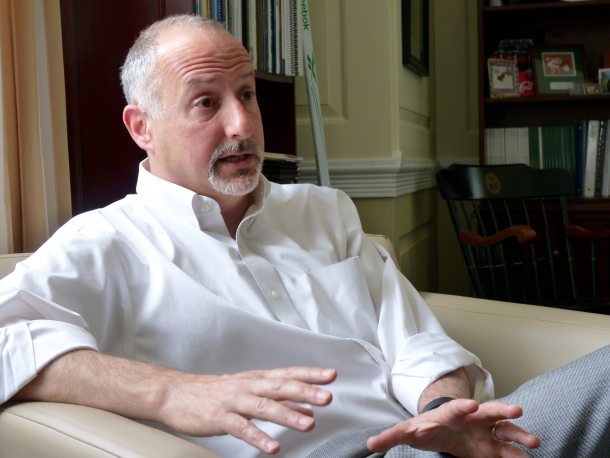 William Falls, the dean of the College of Arts and Sciences, announced the proposed faculty cuts to department heads in an email dated Jan. 18.

The reduction in force would be in response to new budgeting mandates that require UVM departments to balance budgets based on tuition income from student enrollment in courses.

The layoffs under consideration are among the more palatable options offered by the College of Arts and Sciences, according to a letter sent by Tom Streeter, a professor of sociology and president of the faculty union, United Academics, to colleagues.

The proposed cuts to non-tenured faculty comes on the heels of the elimination of 12 courses in November. The reduced course offerings are the result of a new budget model known as incentive based budgeting, which requires each department to operate on base funding derived from student enrollment levels.

As student interest in liberal arts coursework has declined, the College of Arts and Sciences has struggled to maintain funding levels. The reduced course offerings last fall was meant to help offset a $4 million deficit. The funding gap was later lowered by the central administration to $2 million.

UVM Provost David Rosowsky has said that incentive-based budgeting, which has been in place since 2015, is meant to give deans more flexibility in managing revenues and expenses.

It is a departure from the previous model in which the central administration, the president and provost, made allocations to the colleges and deans worked within prescribed budgets.

Streeter, the union president, said the new budget model leaves colleges no option but to cut personnel. “Of course it's pressure from the central administration to cut faculty on the college level,” Streeter said. “Where else are they going to cut from?”

Incentive based budgeting is the UVM equivalent of "responsibility-centered management," Rosowsky says, which is used by most public schools across the country. Incentive-based budgeting relies on an algorithm to allot money to colleges based on a number of factors such as enrollment.

Funds are allocated to each college based on a weighting system derived from the average cost of teaching a class, according to the incentive-based budgeting manual. The College of Arts and Sciences is multiplied by a factor of one, while other colleges are given a heavier weight.

Streeter says the system is like “telling someone to make you lunch, giving them $5 and then being disappointed when all they can serve is peanut butter and jelly sandwiches.”

Under incentive based budgeting, the central administration gives each college or “responsibility center” a certain amount of money based on an algorithm that is supposed to incentivize colleges to create better courses and attract more students to majors in that college. Some of the money is to be used for marketing, facilities and student services.

Incentive-based budgeting, which was created in part to promote innovation across colleges, has been the driver for the creation of five new majors and 13 new minors, according to 2017 budget information.

But cuts to liberal arts courses last fall have not been well received. The UVM Cynic, the student newspaper, dedicated two editorials on Nov. 7 and Nov. 30 to the importance of funding the humanities.

Amid accusations by students and faculty, the central administration has reiterated its commitment to the Arts and Sciences. Rosowsky wrote an op-ed in the Cynic on Dec. 3, which pushed back on the idea that the university is marketed as a STEM school and cited recent expensive restoration projects that benefit the humanities.

Last week UVM President Tom Sullivan announced in a campus-wide letter that the 2018 commencement speaker would be an UVM alumnus and art history scholar, Alexander Nemerov. Sullivan emphasized that the arts and humanities are “central” to academic studies.

Streeter said the university is shifting away from the idea of education as a “public good.” “Students come to school and while they have larger facilities, they have larger class sizes as well,” he said.

Dean Falls and UVM spokesperson Enrique Corredera did not respond to requests for comment.

Thanks for reporting an error with the story, "UVM College of Arts and Sciences looks to eliminate non-tenured facul..."

A birthday on Earth Day: The life and legacy of Shelburne Farms’ Marshall Webb