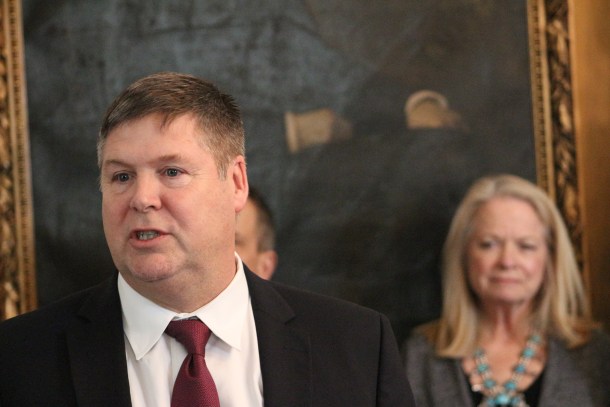 ​Al Gobeille is secretary of the Agency of Human Services. File photo by Erin Mansfield/VTDigger

[F]rustrated by a growing mental health crisis, officials in six Chittenden County municipalities are teaming with the state to hire a new kind of first responder.

The communities soon will be sharing four mental health counselors – known as street outreach or community outreach workers – who will try to intervene before a resident ends up in an emergency room or police custody.

The program has been deemed important enough that it will warrant an unspecified midyear budget adjustment request from the Vermont Department of Mental Health.

“We call a lot of things a crisis. This is a true crisis,” state Human Services Secretary Al Gobeille said. “We’re trying to be creative and flexible.”

Each municipality also is kicking in funding, with officials saying they recognize the limitations of police in dealing with mental health incidents.

“A lot of times, the best response to a mental health crisis is not somebody showing up with a badge and a gun,” said Kevin Dorn, South Burlington city manager.

The state of Vermont’s mental health system – its funding, capacity and effectiveness – is a source of constant debate. Last year, Brattleboro Retreat Chief Executive Officer Louis Josephson called for reforms while declaring that “there is no mental health system.”

At the front end of the system, problems sometimes manifest in assaults on residents or police officers and a backlog of patients stuck in hospital emergency rooms waiting for inpatient mental health beds.

In Chittenden County, municipal leaders have been meeting with health care administrators to talk about new ways to address the issue. Officials “have recognized in the past year the growing problems with mental health in our communities, oftentimes manifesting itself in suicide or attempted suicide,” Dorn

That’s happening in conjunction with the state Mental Health Department via a contract with Howard Center, which is hiring four mental health counselors. 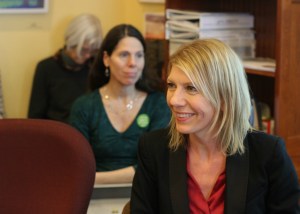 Melissa Bailey, the commissioner of the Department of Mental Health, testifies in front of the House Health Care Committee. File photo by Erin Mansfield/VTDigger

“Those positions are posted, (and) they’re in the process of interviewing,” Mental Health Commissioner Melissa Bailey told the House Health Care Committee on Thursday. “They should be on staff for the Howard Center in January.”

The mental health workers would divide their time among the six municipalities. Although they could be deployed in varying ways, the general idea is to offer help to those who need it while taking pressure off police officers and ambulance crews.

Officials also are hoping the initiative leads to fewer mental health patients waiting in emergency departments, since they might be diverted to other services first. That caught the attention of House Health Care Committee Chairman Bill Lippert, D-Hinesburg, who called the program a “targeted, specific response.”

It won’t be a catchall, and early intervention won’t work for everyone. But Gobeille cited the potential power of a “five-minute conversation” with a mental health counselor, and municipal officials are similarly optimistic about the program’s potential.

“My hope in this is that our residents get the best care at the lowest level needed,” Winooski City Manager Jessie Baker said.

Some police departments already have embedded social workers. But officials see the new outreach program as complementary rather than redundant.

One key difference, Bailey said, is that social workers often must bill an insurer in order to support their position. That won’t be the case with the new community outreach positions.

“What we’re talking about … is taking that Medicaid billing piece off the table, because it creates a lot of barriers to people getting access to the care they need,” Bailey said.

That puts the financial burden on the state and municipalities. Bailey said she couldn’t yet release a figure, but she expects the department will submit a related budget adjustment request to the Legislature in the coming days.

One way or another, she said, “the administration is committed to finding ways to support this financially.”

Towns are budgeting to pick up their share. In Winooski, Baker said she’s requesting $12,300 for the outreach program in fiscal year 2019.

“It’s a much more feasible financial plan for us than if we were each individually to hire mental health professionals to be in our police departments,” she said.

Dorn said South Burlington officials may pursue grants to help pay for the service. He said the city also is providing office space for counselors.

“We have to respond to mental health crises in our community regardless of who’s going to pay for the service,” he said.

Bailey said she’s been talking with officials in the Barre-Montpelier, Rutland and Brattleboro areas to gauge whether there’s interest in expanding the community outreach program southward.

The targeted regions “have a higher use of emergency departments, a higher rate of homelessness and higher general assistance use,” she told the Health Care Committee. At the same time, she said, “each town needs something a little different.”

Brattleboro’s Police Department has a staffer funded by Health Care and Rehabilitation Services, a community mental health agency. Town Manager Peter Elwell said the person “provides literally life-saving service to the vulnerable populations she works with” while allowing officers to focus on their jobs.

“We look forward to continuing to work with the state, HCRS, local partners and potential funders to expand this kind of street-level assistance both within (the Police Department) and in other organizations that are on the front line of addressing mental health issues in our community,” Elwell said.

Thanks for reporting an error with the story, "State, municipalities team up to hire mental health responders"