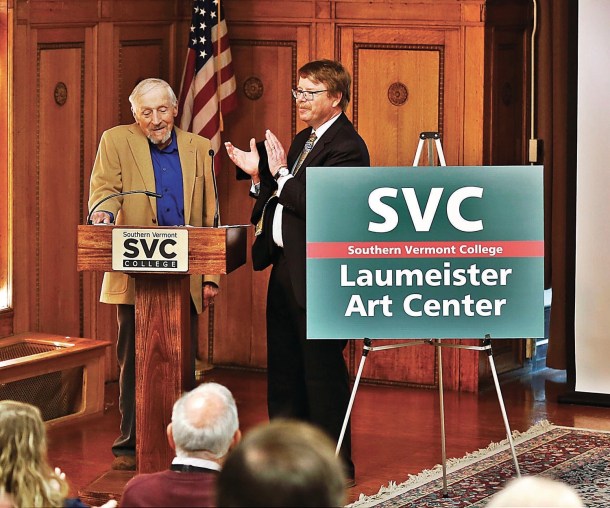 (Bennington Banner News Editor David LaChance contributed to this story. It was updated Dec. 11 at 8:55 p.m.)

[B]ENNINGTON — The owners of the Bennington Center for the Arts have agreed to donate the facility to Southern Vermont College, a gift the school's president called "genuinely transformative" for the college.

SVC President David Evans announced Monday that under a "pretty complicated agreement," Bennington Center for the Arts founders Bruce Laumeister and Elizabeth Small are donating the arts center on Gypsy Lane. The plan has been approved by the executive board of the college's board of trustees, and a formal closing is expected before the end of the year. As of Jan. 1, the BCA will be known as the Laumeister Art Center.

The couple’s donation is "by far the largest gift in the history of the college," Evans said.

Included in the gift are the building, the land and about a third of the center's pieces of art, which number in the hundreds. It comes to the college free of debt.

The donation "provides the facilities, and creates the impetus, for us to expand our offerings in various arts areas and in nonprofit management," Evans said. "It moves the college immediately into a pivotal position in the cultural renaissance happening all around us."

"It's going to be tough for all the family to give this up, (but) we're not walking away from it," Laumeister told the audience of students, staff, faculty and community members. "I built it for the community. And it'll stay in the community. And SVC couldn't be a better resource."

Describing Laumeister and Small as "longtime friends of the college," Evans said the gift "indicates a level of confidence in us and in our future that can help us develop more momentum in student recruitment, fundraising and community engagement. All of us at the college are excited to build a strong future built on this foundation as well as on our existing strengths."

Although not taxed because of its nonprofit status, the center, on a 5.81-acre property along Route 9, is valued at just under $2 million on the Bennington grand list, according to the town website.

"This is a pretty phenomenal property," Evans said.

The 36,000-square-foot arts center, with a 315-seat theater, was built by Laumeister and Small during the early 1990s and opened in 1994. Wings were added in stages over about 15 years, creating a total of seven galleries, offices and other spaces. The grounds feature a covered bridge museum and gardens.

Evans told the Banner that plans for the space include staging entertainment events in the theater, including music, lectures or traveling theater productions, and for the first time having adequate space for large college gatherings such as commencement ceremonies.

SVC has never had enough comparable space to hold those ceremonies indoors, Evans said. The largest equivalent venue currently available is at Everett Mansion, which seats 85.

"In this community, having a foot in the arts is immensely important. This creates a giant, instantaneous opportunity to be a player in the arts in Bennington," Evans said.

He said a small committee has been formed to come up with "a really quick initial plan" for the summer, adding that, "by the end of the spring semester, we'll have a really good idea of where we're going."

He said SVC and the Laumeister Art Center will explore ways to work with other institutions such as Oldcastle Theatre Company and the Vermont Arts Exchange, as well as business or promotional groups. "We should all be contributing to prop each other up," he said. "If there are sensible ways to collaborate with any of these organizations, we'll be excited to do it."

Evans said the school isn't planning a theater program that would compete with those at Bennington College, but the school currently isn't able to offer theater at all.

For students, the gift provides opportunities for hands-on experience in management, writing, public relations and the arts. "At the same time, the gift's arts focus gives us an almost entirely new footprint in this critical area of the liberal arts, an area that has been proven time and again to contribute tremendously to the students' learning, regardless of their main area of study," Evans said.

Thanks for reporting an error with the story, "Bennington Center for the Arts donated to Southern Vermont College"