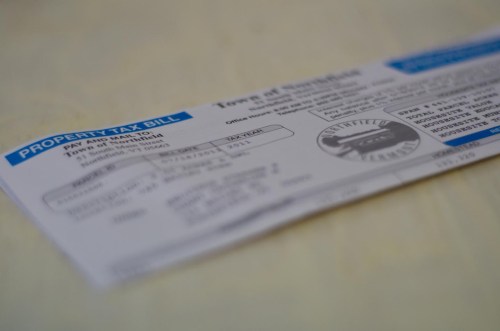 Remember when Gov. Phil Scott derailed the end of the legislative session with his idea of changing the health care system for school employees?

Whether it was a good idea or a bad one, there was something close to a unanimous view that Scott’s plan was politically shrewd. That’s because it was billed as a path toward reducing property taxes.

And in this state there appears to be nothing that arouses more distaste than property taxes. Not even the New York Yankees (who have their fans here) or fake maple syrup (it’s on the store shelves, so somebody must be buying it) inspire as much bitter opposition as property taxes.

Not that Vermonters (or anyone else) love paying other taxes. But the property tax is especially unpopular, which is no surprise to Joan Youngman, who wrote a book about it.

For most people, state and federal income taxes are withheld, and effectively unseen. Sales taxes are paid in small increments in “thousands of transactions nobody keeps track of,” Youngman said.

But homeowners pay their property taxes by writing a check – once a year to the town or into an escrow account added to their monthly mortgage payment. That’s noticeable, especially because while the mortgage payment typically stays the same, the property tax payment does not, and it rarely goes down.

To Youngman, the visibility of property taxes is a virtue. Her book, published by the Lincoln Institute last year, is called “A Good Tax,” and she thinks the property tax is good because it keeps people “aware of the cost of government,” and determined “to see if their local government is spending money efficiently and wisely.”

Property taxes are not as disliked everywhere, said Daphne Kenyon, another scholar at the Lincoln Institute, who said she has studied the property tax in all 50 states.

“In Delaware they really don’t care about the property tax,” she said, pointing out that Delaware gets so much revenue from the large corporations headquartered there that it can keep its property taxes low. So can Western states that get royalties from oil, gas, and coal extraction.

Vermont property taxes are also devilishly complicated, which Kenyon thinks could be another reason people don’t like them. Most property tax revenue supports public schools, and for many taxpayers the largest share of their bill is the statewide education property tax. But 70 percent of Vermont property tax payers are “income sensitized.” They do not pay solely on the value of their home. The law caps their payments depending on their income.

“It’s unique,” said Kenyon. “In effect, Vermont has converted its property tax into an income tax.”

More precisely, it has converted part of its property tax into an income tax, which could also help explain why the tax arouses such ire. Vermont created its statewide school property tax 20 years ago. It did so as a deliberate effort to make its school finance system more equitable. The new law (Act 60) imposed a greater burden on the wealthy in wealthy towns, who under the old system had enjoyed low tax rates.

Not surprisingly, some of the wealthy object, some just because their property taxes have gone up, some because they are ideologically opposed to more economic equity.

This could help explain why much of the opposition to property tax hikes come from the more affluent. Not that middle-income homeowners don’t protest when their taxes go up. But they often go up more slowly because of income sensitivity.

Act 60 might have exacerbated opposition to the property tax in Vermont for another reason. Dartmouth College economics professor William Fischel said opposition to property taxes “is quite universal until you apprise people of what happens if get you rid of the property tax” by transferring the provision of services to the state’s government with its broader-based income and sales taxes.

From this perspective, Vermont chose a lose-lose combination: It kept the property tax but shifted much (not all) control to the state. The property taxes remained; the sense of local control was diminished.

In many ways, Act 60 has been a success, creating, in the words of a 2012 legislative report, “an equitable system,” or at least a more equitable system which has led to better schools in poorer areas. But this success may have come with a political price.

Vermont’s school finance system is so complicated that Mark Perrault, the senior fiscal analyst for education finance at the Legislature’s Joint Fiscal Office, said it was effectively impossible to estimate the tax bill for the average or typical homeowner who is covered by income sensitivity.

It is possible – though with lots of caveats about how no one case can be truly typical – to estimate the tax situation of the 30 percent who do not fall under income sensitivity. Joyce Manchester, another economist at Joint Fiscal, estimated that owners of a home now worth $300,000 would have paid about $7,800 in 2015.

Oversimplifying slightly, policy analysts often consider this an increase of 2 percent a year (it’s actually a bit less). That’s still a noticeable tax hike, higher than the inflation rate of the last several years. But Youngman said she wouldn’t call it excessive, pointing out that the costs of some government services go up even faster.

“What does local government pay for?” she asked, noting that costs for items such as teachers’ health care and retirement plans often go up 2.5 percent a year or more. Though local authorities “should have to justify any increase,” she said, “it’s not clear on the face of it that (this rate of increase) is … unreasonable.”

Besides, those taxpayers get some of their money back. Like almost all American homeowners, they are government-subsidized. These owners almost certainly have a six-figure income and deduct their tax payment from federal taxable income.

Property taxes are unfair and inefficient, Youngman said, if property is not re-evaluated at frequent intervals. “There is always a political incentive to delay revaluation,” she said.

That incentive may be affecting Vermont, where “the data shows we are falling behind” meeting the recommendation of the International Association of Assessing Officers that all property be re-evaluated every 10 years, according to Douglas Farnham, the director of the Property Valuation and Review Division at the Tax Department.

In Vermont, Farnham said, “the decision on whether or not to reappraise is left to the local town government” in most cases, and though the state pays for half of a 10-year reassessment, some localities seem reluctant to spend the other half.

Thanks for reporting an error with the story, "Margolis: The property tax quandary"