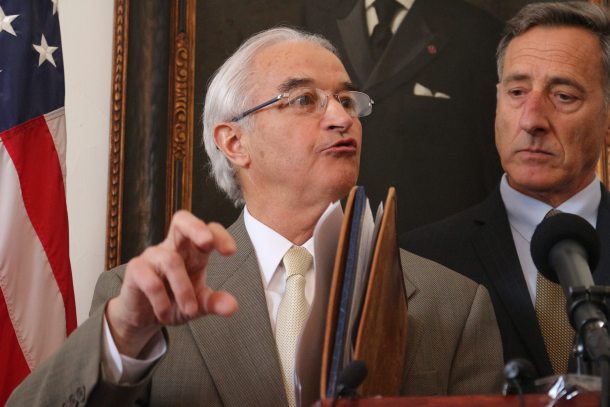 The Energy & Environment Legal Institute has brought a handful of lawsuits in Vermont and New York seeking records related to what the group describes as a “cabal among activist attorneys general” in a case involving oil giant Exxon Mobil.

Those allegations stem from the two states’ involvement with a Climate Change Coalition of 19 states that considered investigating Exxon Mobil over allegations it hid research about the connection between fossil fuel consumption and global warming, and therefore deceived investors and the public.

The latest suit was brought after litigation revealed that New York Attorney General Eric Schneiderman also used a private Gmail account, according to Matthew Hardin, an attorney for the Energy & Environment Legal Institute.

Vermont denied an initial public records request and subsequent appeal for any private email communications between Schneiderman and former Attorney General William Sorrell, saying it was not the custodian of records on Sorrell’s private Gmail account, according to the new lawsuit.

A similar public records request in New York is being appealed and will likely land in court as well, Hardin said.

“The public should care about this because these officials are communicating on Gmail basically to avoid transparency,” Hardin said.

“If this group thinks I am part of a cabal of liberal AGs who believe climate change is real and greenhouse gas emitters bear responsibility, I am of that view, but there was never any conspiratorial attempt to use private email,” Sorrell said. Sorrell did not return a call seeking further comment Monday.

TJ Donovan, Vermont’s current attorney general, said his office has reviewed instances where Sorrell followed the practice he described of forwarding emails from his private account to his public one. 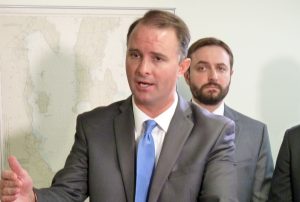 Before searching for or releasing records from any private account, Donovan said he will wait for a Vermont Supreme Court ruling on the issue. That ruling, in a case that also stems from the use of private email by Sorrell and other employees in the attorney general’s office, is expected to provide clarity on when and whether the state must search personal email accounts for communications that may be public record. Donovan said he also expects state lawmakers to tackle the issue during the upcoming legislative session.

“Going through this process can be aggravating,” Donovan said of the lawsuits from E&E Legal Institute and others. “But at the end of the day, if we have clarity from the Supreme Court and clarity from the Vermont Legislature, that’s going to be better for Vermont.”

E&E Legal Institute initially sued Vermont after a previous request for records was denied. That request sought records related to an agreement between Vermont and New York, whereby the two states’ attorneys general sought to shield their communications as they explored the allegations against Exxon Mobil.

Washington Superior Court Judge Mary Miles Teachout ruled for E&E Legal Institute in that case, rejecting the Vermont attorney general’s argument that the records could be withheld because they are protected by attorney-client privilege — the client in the case being the state of Vermont.

In her ruling, Teachout said exemptions to the public records law may be claimed, enabling government officials to deny or redact records, but those exceptions must be interpreted narrowly. Attorney-client privilege, she wrote, may not be extended to the administrative and operational functions of state government.
The ruling gives Vermont 30 days from when it was issued July 27 to appeal or turn over the records pertaining to the common interest agreement with New York. Donovan said his office is preparing records to turn over to E&E Legal.

In a separate lawsuit, the group is seeking other communications between Vermont and New York relating to the abortive Exxon Mobil probe. Some of those records are on Sorrell’s private Gmail account, according to Hardin.

Sorrell did not seek re-election in 2016 after serving as Vermont’s attorney general for 20 years. Donovan’s office argued that it could not release records from Sorrell’s Gmail account because he was no longer a public official.

In a Monday news release, E&E Legal Institute also raised questions about whether the Vermont attorney general’s office is representing Sorrell in the ongoing legal battle.

The group provided emails in which its Vermont attorney, Brady Toensing — a high-profile Republican who brought the public records case now before the Supreme Court — tried to send legal filings to Sorrell. The Democratic former attorney general responded with what E&E Legal described as a “cease and desist order.”

“Mr. Toensing, Unless and until future notice otherwise, please communicate with me only through Bill Griffin,” Sorrell wrote to Toensing in an Aug. 1 email. William Griffin is the chief assistant attorney general, who has defended Vermont in the E&E Legal cases.

Hardin said a plaintiff’s attorney is not allowed to contact a defendant directly if the defendant has an attorney. Such contact could lead to disbarment, he said.

Toensing responded by forwarding Sorrell’s message to Griffin, along with the message: “Dear Bill — Please see the email below and advise how we should proceed. Is the state now representing Mr. Sorrell in this matter?”

Griffin responded Aug. 2 saying, “The (attorney general’s office) is consulting with Mr. Sorrell about your lawsuit against him. If you have a message for Mr. Sorrell, you can send it to the AG’s Office, to my attention. However, the AGO has not been authorized to accept service of process on Mr. Sorrell’s behalf.”

Donovan said statute would allow the state to represent Sorrell in his capacity as attorney general. “Whether or not the AG’s office represents him is still being discussed,” Donovan said.

Hardin blasted how the state is handling the situation: “Vermont’s current attorney general is the lawyer protecting former AG Sorrell’s work-related Gmails from public disclosure, and apparently also from compelling Sorrell to turn over to the government and to the public the very records that he created in the use of a taxpayer-funded office. This is not how a transparent government operates and the people of Vermont deserve better,” he wrote in the news release.

In 2015, while under investigation by an independent counsel on suspicion of campaign finance violations and allegations of giving a law firm a state contract in return for a campaign contribution, Sorrell released emails from his personal Gmail account to show that a news conference about high gas prices in Chittenden County was work-related and not a campaign event.

The independent counsel cleared Sorrell of any campaign finance violations but declined to weigh in on the “pay to play” allegations, saying those were beyond the scope of the investigation.

In his case for searching private email accounts for public records, Toensing cited Sorrell’s use of his personal Gmail account in the records released to the independent counsel.

That is the case now before the Supreme Court.

Thanks for reporting an error with the story, "Vermont faces new suit for emails from private account"

Gary De Carolis: We are losing the opioid overdose battle