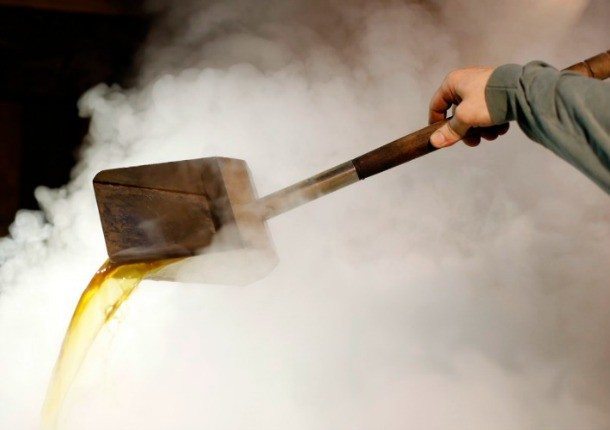 Danny Potter checks the consistency of syrup while boiling sap at his family's sugarhouse in Sharon. Photo by Sarah Priestap/Valley News

[V]ermont’s maple syrup output this year nearly matched last year’s record, according to the USDA, driven largely by a continuing increase in the number of taps.

The state produced 1.98 million gallons in the most recent season, slightly behind the record last year of 1.99 million, says a USDA report.

Henry Marckres, the Agency of Agriculture’s maple specialist for the past 33 years, said the recent highs in maple production are consistent with a longer trend.

“We’ve had just a huge increase in the number of taps in the last 15 years,” Marckres said. That increase reflects growth among both large producers and smaller operations.

In the early 2000s, Vermont had about 1 million taps, Marckres said.

By 2015, that number rose to 4.55 million, and this year maple sugarers increased the number of taps to 5.41 million taps.

Marckres said the growth in syrup production is due to high demand, especially in the bulk market.

“Right now, the markets are good, both in the U.S. and abroad,” he said. “It’s kind of a good time because people are looking to buy local and buy natural.”

Climatic and technological factors have also contributed to increased production.

It’s not just warmer winters that are responsible for longer sugaring seasons, though.

Marckres said that the networks of rubber tubing which have replaced the iconic steel buckets in most operations allow sugarmakers to put in taps earlier than they did in the past.

Because the tubing is a closed system, he said, the tap holes don’t dry out even if the sap stops flowing for some time. This means syrup producers can take advantage of intermittent bursts of warm weather without needing to put in fresh taps after each time the sap stops flowing.

“If your operation has a 100,000 taps, a couple days of fairly good runs makes a lot of syrup,” Marckres said.

Marckres said the slight decline in total syrup production from last year to this year was entirely about conditions.

“It was all weather. Even though we have all the technology in the world today, Mother Nature still rules the production,” he said.

The 2017 sugaring season came during an ongoing outbreak in Vermont’s population of forest tent caterpillars that began last summer.

The caterpillars prefer the leaves of hardwood species, especially sugar maple. Last year the caterpillars defoliated around 25,000 acres of forest in northeastern and north-central Vermont.

Mark Isselhardt, a maple specialist at UVM’s Proctor Maple Research Center, said this year’s defoliation likely won’t be as bad as the peak of the previous cyclical outbreak in 2006, when 310,000 acres were denuded. But he does anticipate a dramatic increase in acreage from last year.

Just how bad that news is for the 2018 sugaring season is unclear, said Isselhardt.

Marckres is optimistic that Vermont’s maples will recover before the summer ends.

“The foliage looks fantastic this year,” Marckres said. “Overall, I think we’re going to be in pretty good shape again.”
/

Thanks for reporting an error with the story, "Vermont maple syrup production at near record high in 2017"